Concertgoers who attend events in Sanders Theater must first pass through Memorial Transept within Memorial Hall, Ware and van Brunt’s enduring Ruskinian Gothic tribute to Harvard men who died in the service to the Union during the Civil War. One always reflects upon the names and death dates chiseled on commemorative marble slabs underneath the names of the battle-sites. It was therefore entirely fitting that a musical program devoted to recollection of the Civil War should take place in Sanders Theater in the month recalling the 150th anniversary of the end of the war.

On Sunday, May 3rd, the Harvard Radcliffe chorus and the Boston Modern Orchestra Project, conducted by the chorus’s regular director Edward Elwyn Jones, offered a short program of two choral works to texts by Walt Whitman, the preeminent poet of the Civil War. Actually both works were composed in reference to later wars, but Whitman’s poems published in Drum Taps, inspired by his own experience as a nurse in the Civil War, captured the spirit of patriotism and sorrow that is characteristic of war in any period.

William Schuman’s rarely heard choral composition from 1942, A Free Song, opened the program. The year following its premiere it was awarded the very first Pulitzer Prize given for music. Actually Schuman probably received the Pulitzer for his Symphony No. 3, a major and lasting contribution to American music, but which missed being eligible for consideration by a few months. A Free Song, though a fine and sturdy composition, is less impressive (and has been far less often performed), but it nonetheless gave the Pulitzer committee a work that would justify the award to Schuman. The performance by the Harvard forces offered a rare, welcome opportunity to hear it.

It was particularly appropriate for this piece to be on the program at Sanders since at its world premiere by the Boston Symphony Orchestra the choral ensemble consisted of the 1942 equivalent of the Harvard-Radcliffe Chorus.

Built on two poems: “Long, Too Long, America” and “Look down, Fair Moon,” A Free Song’s first movement is slow and quiet for the most part. The loud and energetic second movement is based on Whitman’s Song of the Banner. Together they build from a hushed opening to a fine, affirmative conclusion. One thing that struck me was the almost obsessive text repetitions in the score; it might have been more effective as a piece if some of these passages had remained purely instrumental. It is most obvious at the very opening, where “long, too long” goes on repeatedly, almost as if introducing a minimalist score. But as a pair, the two movements work to provide excellent contrast. The performance was firm and clear, though the words were sometimes overpowered by the orchestral climaxes.

Ralph Vaughan Williams’s longer Dona nobis pacem, was composed in 1936, but its forceful emotional quality is a heritage of his grueling experiences in World War I, first as a stretcher bearer in France and Salonika, then as a commissioned second lieutenant of artillery. As new war clouds darkened Europe in 1936, he created a unique fusion of liturgical text, English poetry (mostly by Whitman) and Biblical passages to produce a musical anti-war document of considerable power. (Several commentators have noticed that RVW’s mixture of Latin—though only one phrase repeated at several points in the score—combined with poems in English with a strong anti-war tone anticipates by a quarter century Benjamin Britten’s larger and arguably still more significant War Requiem .)

From the opening measures, the soprano soloist (here a very fine Deborah Selig) sings the closing sentence of the Mass Ordinary, the Latin words that mean “Lamb of God, that takest away the sins of the world, grant us peace.” The last three words, “dona nobis pacem” appear on their own at several points, reinforcing the theme of the composition. The chorus enters with the same words immediately after, urgent and passionate.

The movement ends with the plea dying quietly away. Underneath a percussion figure grows progressively louder, spilling over into the next movement, a setting of Whitman’s “Beat, beat drums!” This is a rush to war, demanding that all normal peacetime activities cease. The choral writing is harmonically challenging and dramatic; it was well projected by the Harvard-Radcliffe forces over the pungent orchestral part. At length this movement, too, ends in a dying fall over hushed percussion figures, running directly into the deeply moving baritone solo, “Reconciliation.” An expressive and emotional high point, beautifully evoked by baritone Paul Max Tipton, the poem notes that eventually, when all is over, those affected by the war and its losses must somehow come to terms with it. Vaughan Williams touchingly sets Whitman’s words:

For my enemy is dead,
A man as divine as myself is dead, …I draw near,
Bend down and touch lightly with my lips
The white face in the coffin….

(This passage especially seems to anticipate “Strange Meeting” that comes at the close of the War Requiem.)

The “Dirge for Two Veterans” was originally composed as early as 1911, but it fit so well into the theme of Dona nobis pacem that Vaughan Williams inserted it here. It describes a funeral procession in which it becomes clear only toward the end that the burial is for a father and son who died close together in battle leaving their womenfolk to mourn. The setting moves between quiet poignancy and a full-throated cry brought on by “the strong dead march.” 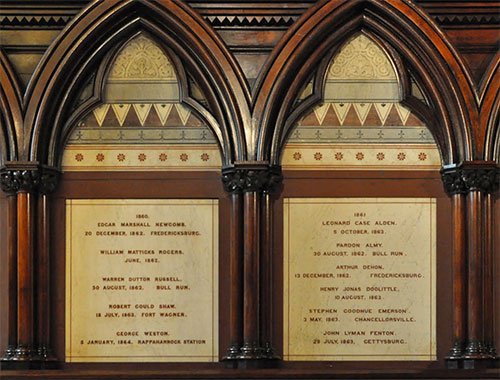 From this point on, the English texts come from sources other than Whitman. “The Angel of Death” uses imagery drawn from Exodus praying that the baleful angel might move past the poet’s door. (The poem is by John Bright.) A choral outburst of “Dona nobis pacem” brings back the baritone asking peace for the “man greatly beloved” who is gone. The score closes with Biblical prophecy (“Nation shall not lift sword against nation”) to a ringing affirmation of a “new heaven and a new earth.” A brilliant paean solidly grounds the conclusion with divine praise “and on earth, good will toward men.” As this fades away, apparently into the distance, the soprano recalls the point: dona nobis pacem.

Edward Elwyn Jones marshaled the choral and orchestral forces, with two fine soloists, into a splendid and moving event compounded of the text and music of Vaughan Williams’s piece, the historic location, and the anniversary of the remembered event.

Steven Ledbetter is a free-lance writer and lecturer on music. He got his BA from Pomona College and PhD from NYU in Musicology. He taught at Dartmouth College in the 1970s, then became program annotator at the Boston Symphony Orchestra from 1979 to 1997