The Handel and Haydn Society will conclude the first full season of its ambitious Bicentennial celebration with Haydn’s The Creation at Symphony Hall on May 1 and 3. The program choice is fitting, for the very seal of the H+H, dating to 1816, is emblazoned with the titles of what the founders deemed the greatest works by their namesake composers: Handel’s Messiah and Haydn’s Creation.

The critical and popular fortunes of the two oratorios have not, of course, always kept pace in Boston or elsewhere. Messiah is a ubiquitous holiday fixture, whereas the H+H, which gave the first complete U.S. performance of Creation in 1819, has not presented Haydn’s greatest work since 2001. Reviewing Boston “Concerts of the Past Winter” in the July 1840 issue of the short-lived but important Transcendentalist journal The Dial (1840-1844), the first major U.S. music critic—the prolific John Sullivan Dwight—set the bar impossibly high, declaring Handel’s oratorio the greatest of all musical works: “Music is the inspiration, the yearnings of the heart to the Infinite,” he wrote, and in Messiah Handel achieved “a complete and epic unity” expressing that supreme theme. An advocate of orchestral music, Dwight credited Haydn with creating the symphony, but came to regard Beethoven as master of that form and the greatest composer next to Handel.

Decades later, in April 1887, Dwight assumed authorship of the History of the Handel and Haydn Society . . . 1815-1890 (Boston: Alfred Mudge & Son, 1883-1893) after his predecessor, Charles C. Perkins, was killed in a horse-carriage accident. Picking up the narrative with the 1851-52 season, Dwight observed that performing oratorios by Handel and Haydn remained “obligato by the very name of the Society”; but he noted that next to Messiah, Mendelssohn’s Elijah by that time “had made the greatest impression” in Boston. Nevertheless, Haydn’s reputation in Boston remained high in the 19th century thanks to the efforts not only of the H+H, but also of Dwight and his Transcendentalist associates.

A member of the Transcendental Club in the 1830s and a resident at the West Roxbury reform community Brook Farm in the early 1840s, Dwight was well acquainted with Ralph Waldo Emerson and the dynamic teacher, journalist, and feminist Margaret Fuller. In the October 1841 issue of The Dial, which she edited until early 1842, Fuller surveyed the “Lives of the Great Composers.” Her choices (which were also Dwight’s) were all Austrian- or German-born. The sublime Handel was preeminent; the dazzlingly versatile Mozart and the grand Bach—emerging from obscurity and his life best viewed as a satisfying “whole”—both embodied “self-reliance” (Emerson’s great essay by that name was published the same year); Beethoven was the titanic new voice of “uncompromising democracy”; and self-reliant Haydn, radiating “the amplitude and sunny majesty of his career,” displayed “manly uniformity that makes his life intelligible alike to the genius and the citizen.” All five passed the Transcendentalist test as “true artists” through whom the “intuitive faculty speaks.”

Fuller was more interested in the character than the aesthetic qualities of these composers. She shared her generation’s penchant for listing, classifying, and ranking well-known persons according to their achievements in various walks of life. It was a way to promote worthy models of conduct and to measure the young nation’s cultural attainment. On this side of the Atlantic, many were still smarting from English clergyman and social critic Sydney Smith’s jab at our provincialism in the Edinburgh Review (1820): “In the four quarters of the globe, who reads an American book? or goes to an American play? or looks at an American picture or statue?” (And Smith didn’t even mention music!). So citations of American attainment tended to be unabashedly patriotic. The Boston Post ran a notice on December 18, 1845, for example, urging readers to “visit Daggett’s new store, in Washington street” to see “Portraits of our Great Men” by the fine painter George P. A. Healy before they were shipped to King Louis-Philippe in France: “There are Jackson, Webster and Audubon, three of the greatest of our time; our men of action, of thought and of science, of the present century.” Dramatic economic and geographical expansion also fueled more aggressive forms of nationalism. (The term manifest destiny was coined in 1845.) 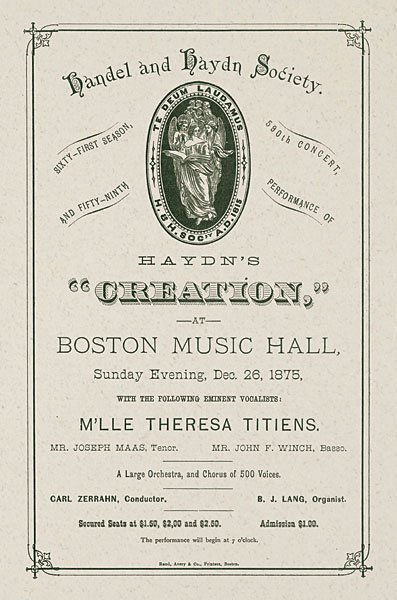 The Transcendentalists’ interest in cultural giants, however, was strikingly non-jingoistic. Indeed, the most remarkable study of “Great Men”—Emerson’s lecture series of 1845-46, which became the book Representative Men (1850)—pointedly lacks a single American: There were Plato (the Philosopher), Swedenborg (the Mystic), Montaigne (the Skeptic), Shakespeare (the Poet), Napoleon (the Man of the World), and Goethe (the Writer). Unlike his British friend Thomas Carlyle’s approach to the study of great men, moreover, Emerson was averse to “hero worship” of monarchs, dominating military leaders, and tyrants (he skewers Napoleon). Each of his figures embodied virtues (and defects) of the human condition writ large; each was a benchmark against which readers could measure their own moral, intellectual, and spiritual condition. In this spirit, Fuller presented her “lives of the great composers” with the core Transcendentalist belief in “the identity and universality of all thought.” For the H+H, promoting the best European masters was a necessity; there was no American world-class composer. Still, the Society was impressively cosmopolitan in building a local music culture.

We tend to think of the Transcendentalists as rarefied idealists. But they passionately supported all kinds of social reform as well as individual self-culture. The same principles drove the founders of the H+H, who, Jan Swafford explains, were not aristocratic Brahmins but middle-class merchants and working people (The Handel and Haydn Society: Bringing Music to Life for 200 Years, ed. Teresa M. Neff and Jan Swafford [Boston: David R. Godine, 2014]). These civic-minded founders, and their Transcendentalist allies two decades later, promoted music in Boston not as a pretentious ornament for the elite but to inspire a more enlightened citizenry.

Haydn’s appeal to the Transcendentalists was moral (his exemplary life) as well as aesthetic and philosophical—spheres Emerson, Dwight, and Fuller considered intimately linked. The very theme of “Creation” struck a chord. “Whoever creates is God,” Emerson wrote in his journal with classic Romantic hyperbole. Haydn celebrates the wonder of Creation from Chaos, the splendor of all living creatures, the “verdure” of a fresh new world. “Haydn,” Fuller wrote, “is the untouched green forest in the fulness of a June day.” Moreover, though The Creation is based on the Book of Genesis and Milton’s Paradise Lost, its theological burden is light, displaying the love of Adam and Eve before the Fall—welcome to the many Transcendentalists who were former or active Unitarian clergymen and who thus had little interest in original sin.

It was an article of faith for Emerson’s circle that nature is a manifestation of the divine. As Dwight declared in The Dial (July 1840), “In nature we feel the same Spirit, who made it and pervades it, holding us up also;” “outward beauty” is “emblematic of something spiritual.” And no composer captured the landscapes and sounds of nature more faithfully than Haydn. Discussing the beauty of “Unity in Variety” in his little first book, Nature (1836), Emerson praised Haydn’s oratorios for “present[ing] to the imagination not only motions, as, of the snake, the stag, and the elephant, but colors also; as the green grass.” Four years later, in his Dial essay on Boston “Concerts of the Past Winter,” the more musically astute Dwight qualified Emerson’s judgment, suggesting that in Creation, “literal description of nature [the ocean, birds, breezes] is carried even too far”; “often they seem too mechanical and curious, and out of the province of Art, which should breathe the pervading spirit of Nature, as a whole, and not copy too carefully the things that are in it.” Indeed, musicologist Nicholas Temperley observes that tone painting quickly lost favor during the Romantic period. Despite Haydn’s too-precise musical imitation of nature, Dwight found much to admire in The Creation: Where Handel’s Messiah “forebodes another world,” Haydn’s Creation “lovingly reflects the hues of this world.” “We enjoy with Haydn the serene pleasure of doing things . . . . Constant, cheerful activity was [his] element.”

In a major essay on Haydn published in the United States Magazine and Democratic Review (January 1844), Dwight revisits his Dial assessment, with emphasis. He credits Haydn with freeing orchestral music from “subservience to other arts, to poetry, to words” but notes that, in practice, Haydn strayed from music “for the sake of music” into describing, imitating, or reproducing the natural world. Dwight compares again contrasting musical geniuses: Handel “conduct[s] souls to the mysterious other world,” whereas Haydn “loves this earth too well.” Though Haydn’s is “not the deepest of music,” Dwight finds its “sunny, healthful, cheerful character” “welcome”—enough that Haydn captures nature’s invitation “to behold her picturesque loveliness, saluting all our senses with a restoring, purifying and refreshing power, and forming in our minds the sense of beauty.” The Creation, he concludes, “is an expression of feelings, an expression of childlike wonder and joy and gratitude and love. . . . And we go away from it feeling the same gratitude for it that we do for nature.”

Familiar with H+H performances of The Creation for decades, Dwight heard it as though for the first time in May 1857: “Many who, after long enjoyment of the naive, happy, childlike, sunny melody and harmony of good father Haydn, had grown dull to its mellifluous sameness, this time found the familiar oratorio brightened into fresh life and charm. It rose, indeed, ‘a new created world.’”

Dwight heard The Creation with a 78-piece orchestra and 450 singers before an audience of only 1,000 at the 2,500-capacity Music Hall. Harry Christophers will conduct a considerably scaled back orchestra and chorus in two “historically informed performances” to full houses at Symphony Hall. “Fresh life and charm” indeed for Haydn’s Creation—and for the H+H at 200.