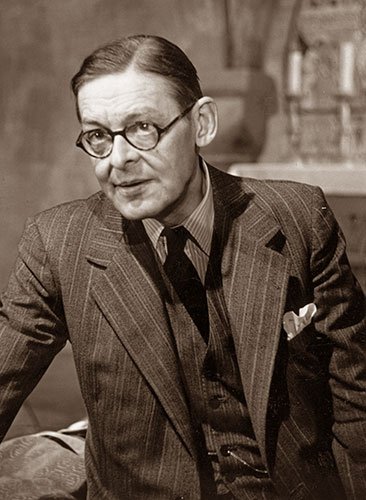 The BU Center for the Humanities has been exploring the influence of T. S. Eliot on music through a series of concerts of which Tuesday night’s was the fourth, “Settings of T.S. Eliot’s Four Quartets” (the set itself was inspired by Beethoven’s op. 132 string quartet). The title is misleading as only one of the three works on the program actually set words of Eliot’s, Stravinsky’s fairly late (1962) “A Dove Descending” for vocal quartet, based on famous lines from “Little Gidding”. The other two pieces, Mark Berger’s String Trio No. 2 and Andrew List’s String Quartet No. 5, were purely instrumental, only drawing inspiration from the Eliot: each had quotes from the Quartets associated with their movements. Both living composers spoke briefly before their pieces; the Stravinsky was preceded by a brief talk by BU Center for the Humanities’ Director, James Winn.

Berger (b. 1977) has been playing viola with the Lydian String Quartet since 2014 and is an associate professor at Brandeis; List (b. 1966) is Professor of Composition at Berklee. Based on the example of these two works, they share a similar aesthetic: music of harmonic density and tonal allusion, with well-defined melodic contours and a fondness for colorful effects. Berger’s Trio took its cues from Eliot’s poem “The Dry Salvages,” whose title refers to a group of rocks off of Cape Ann. According to the composer’s remarks before the piece, it was fittingly commissioned for a North Shore ensemble, which he did not name. There are several movements: an opening and closing movement, and then an interleaving of “Interludes” and “Litanies”. Each of the Interludes gave focus to one of the performers; the Litanies emphasized ensemble. The first movement, subtitled “The menace and caress of wave that breaks on water”, was perhaps the only moment in the evening where Eliot’s words were used programmatically, but gently so. The other movements had their own textual associations, but their relationship to the music was elusive: it was not easy, for example, to distinguish “the oppression of silent fog” from “the silent withering of autumn flowers”. There was a sense of sameness to the movements of the piece – even large gestures felt absorbed into the background texture. Berger has a knack for creating lines that grab the attention, and close listening often disclosed fine details in the give-and-take between the three instruments. There are some interesting sounds: fast runs of string harmonics, pizzicato harnessed to glissandi. The harmonic cushion was a bit too similar from movement to movement, and the work was static dramatically: it was a piece in which I found moments to admire, but which as a whole felt incompletely realized.

List’s Quartet is subtitled “Time Cycles”, which the composer explained was referring to the opening lines of the “Burnt Norton”, the poem that inspired the piece:

Time present and time past
Are both perhaps present in time future,
And time future contained in time past.

(Those familiar with other American composers might also have called to mind Lukas Foss’ Time Cycle, which draws on texts rather less hermetic than “Burnt Norton”.) List also explained that much of the material in the piece was presented most directly in the fifth and final movement, and that their presence in the preceding movements was to evoke the circularity of chronology that Eliot evokes. Perhaps; although one listening to a new piece of music for the first time is as tied to the arrow of time as anyone, and I failed to catch the correspondences he described. However, the work still holds interest. If Berger’s gestures were at times a bit too small for me, List’s are certainly larger: the opening movement (marked “With intensity”) is a study in the attack and decay of at first a single pitch, and then of a small handful of them. The third movement is structured over an ostinato of octaves in the cello, over which plays a sequence of tension and release that ends just before it exhausts its interest. That fifth movement (“Mechanico”) opens and closes with a great clattering overlay of many figures at once, a gesture that calls to mind Conlon Nancarrow’s processes but with a different melodic voice. Apart from that cyclical idea, the music seems relatively untouched by the poem, despite the rather lengthy texts associated with each movement (about five lines per movement). Both pieces were performed by the Arneis Quartet (Heather Braun and Rose Drucker, violins; Daniel Doña, viola; Agnes Kim, cello), who have been playing around town for some time—this is my first encounter with them. In this unfamiliar repertoire, what stood out was their versatility and balance. As realized in the over-brightly lighted Morse Auditorium, the former Temple Israel on Commonwealth Avenue, their sound had a dark but soft-edged quality in the Berger; the List brought out more muscular, even violent, emotions, still expressed with a round and focused tone. The fifth movement of the List showed off a keen sense of individual voice, as the ear could perceive each independent line clearly enough that the brain had to race to try to make sense of each one separately.

“The Dove Descending” is atonal Stravinsky, a period from which we still hear very little. Stravinsky’s adoption of Schoenberg’s methods is idiosyncratic: while one listens in vain for traditional harmonic process, the music still seems to operate from a memory of harmony in a way that later atonal practitioners’ works do not. Described as an “anthem” by the publisher, the piece sounds like rather sober church music with a rustic Eastern edge. It’s a severity appropriate to a text that simultaneously evokes Pentecost and the bombing of London. It is brief and effectively evokes its single mood; the performers on this occasion (Emily Bieber, soprano; Thea Lobo, mezzo-soprano; Garry McLinn, tenor; and Jeramie Hammond, bass) navigated the complex intertwining lines with aplomb and their sound effortlessly filled the Morse. James Winn’s talk before the piece was delivered at break-neck speed, but with no lack of comprehensibility. He knit together Stravinsky’s musical history, his turn to atonality, Eliot’s concerns with time and religion, the meanings of doves and roses in the Quartets, and even the relationship of the intervals of the London air-raid and all-clear sirens to specific moments in the Stravinsky (which were demonstrated by the performers)—a modest tour-de-force, and the one moment of the evenings where the proceedings felt deeply connected to Eliot.

Comments Off on Musical Connections to T. S. Eliot