The Mozart / Da Ponte Così fan tutte, ossia, La scuola degli amanti (Women Are Like That, or The School for Lovers) is an inevitable vehicle for college and regional productions, not only because it provides great solo moments for each of the six principals (and there are no minor roles to drive up costs), but also because there are so many fine ensembles to share the spotlight. It doesn’t hurt that the first act is essentially opera buffa while the second partakes deeply of reconciliation, though not to the extent of boring audiences of parents and fellow students. Saturday night’s production (continues through Tuesday) at Emerson College’s Paramount Theater showed the NEC Opera Department in good fettle.

Stage director and chair of NEC Opera Studies Joshua Major apparently transported the action to a seaside resort in Italy in 1964. We say apparently because there were no scene descriptions in the program book. Credited to “Metropolitan Opera,” the synopsis had been shorn of all location descriptions without any disclosure that the copyrighted document had been edited. Our clue as to date and location for the Don Alfonso Hotel set came from the poster for Marriage Italian Style (1964). The staging presented no impediments to the stand-and-deliver blocking, but more interactions among the characters and more interesting movement were certainly wanted. And once again (the third recent Boston production with this lapse), there was no boat to carry off the leading men; the sisters rather waved to the back of the house.

Christopher Ostrom warmly lighted Gary Decker’s handsome stucco edifice. The unit set became somewhat wearisome, though, having to serve as bedroom, coffeehouse, garden, and open square, with no noticeable lighting changes to differentiate the scenes. Only the final night scene was signaled.

Nancy Leary’s costumes could have been from Mad Men, and confused rather than elucidated. When the principals arrived at the hotel they were met by an Alfonso (Josh Quinn) dressed as a hotel major domo cum Mafia enforcer. Ferrando and Gugliemo arrived in dress uniforms, but in the next scene their appearance in white pants and tee-shirts  seemed to mark them as plongeurs at the hotel. It was strange to see the maid Despina enter in a suit with long pencil skirt and wearing leopard-skinned stilettos (which she continued to sport under her surgical scrubs as Dr. Mesmer). There was nothing to differentiate her class from that of her employers, Dorabella and Fiordiligi, who were similarly coiffed in ’50s-’60s styles. Nor was it typical to cast them as matching brunettes;  this was the first production I have seen where neither was blonde.

Stephen Lord brought forth fine Mozart playing from the 38-strong New England Conservatory Orchestra, even if the sound failed to bloom in the dry and Orange Line-afflicted Paramount. Aside from some horn disasters in the overture, we felt assured of an excellent ride from the musicians in this pit. If there was no sheen on the otherwise excellent strings, details were clean, momentum infectious, patter in synch, and ensembles unanimous.

The singing attested well to the current condition of the NEC Opera Department, though the small chorus sounded a bit underwhelming and top-heavy. As Ferrando, tenor Rafael Delsid was the vocal standout: his honeyed tones and sophisticated Italianate command evoked the era of Gigli and Martinelli, most movingly in “Un’aura amorosa.” He is a man to be watched. His partner in deceit, Vincent Turregano’s Gugliemo, was powerful and lyrical throughout a wide range despite singing through some congestion. Josh Quinn’s Don Alfonso commanded the stage like no other in the production. His idiomatic Italian, replete with continuous hand gestures, revealed him as a natural on the boards, and his singing was younger and more lyrical than most practitioners in this role. Cynicism can come early, and Quinn was wise not to force himself to look or sound older than graduate school. The staging and costuming did no favors to Kameryn Lueng as Despina, and she was unconvincing as a conniving maid, rather more like an ingratiating cruise director. But her singing was clear and musical even with not strong characterizations. As Mesmer, she employed a lodestone instead of a true magnet, and sang in a cartoon manner; as the notary, she looked like David Bowie and sounded like a countertenor.

The sisters were matched in tone and, perhaps consequently, less differentiated as characters. Mezzo Elena Snow made of Dorabella’s status as a guest in a tourist hotel an appropriate diffidence, though without channeling aristocratic hauteur. Her ornamentation and vocal coloration were quite pleasing. Fiordiligi Nan Chi showed a very focused and agile soprano along with a fearless stage manner. If she is not born for comedy, she could develop that part of her arsenal by working on projecting her understanding of words. Although her “Come scoglio” could have been fierier and her “Per pietá” was a bit wan, her Act II duet of surrender to Ferrando, “Fra gli amplessi”,  showed her quite able to project pathos with face and voice. Indeed, that duet was the musical highlight.

In the main, it was the ensembles which provided the amplest Mozartean pleasures, if not also great theater, since a memorable directorial concept was lacking. If you’re going to update Da Ponte, you’d better know what you’re doing. 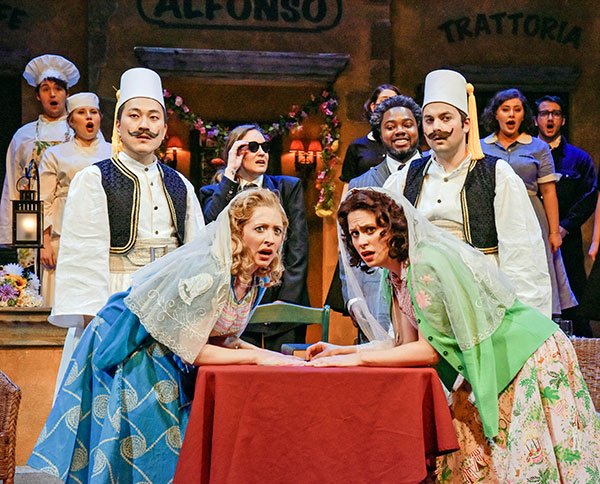 My return to the Paramount on Tuesday for the “other” cast was rewarded by some fine singing and vivid acting. Junhan Choi’s Gugliemo was very cantabile. He deployed a smooth, even instrument with character and intelligence. He could have been less dignified at times. The Ferrando of John Marzano revealed a light early-music tenor who could sing with fine musicality. He was fleet of ornament and earnest of inflection. A charming and eager-to-please Don Alfonso was the work of baritone Leroy David. His attractive instrument was in sotto voce mode a bit too much of the time. He could have highlighted the world-weary cynicism of the character with a bit more snarl.

Tara Deiso endowed Despina with a very forward and lively soubrette sound which convincingly impersonated maid and doctor (I was not able to stay and hear her notary). Rather pregnant-looking (she got a laugh when Fiordiligi asked about her marriage prospects) Stephanie Edewaard Wiedle had a tremendously mobile countenance which conveyed Dorabella’s lightning turns of emotion like a Sarah Bernhardt. She could be a great tragedienne. Her lovely, seemingly passaggio-less mezzo blended well with voice of her stage sister. I heard a dramatic soprano-in-the-making from Jacquelyn Stucker’s account of Fiordiligi. She brought fire, comedy and romance in equal parts from vocal production that could really cut.