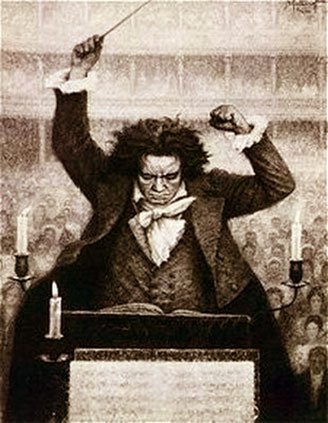 Beethoven at one point considered Missa Solemnis to be his greatest work. In it he was able to combine his late mastery of large orchestral forces with all he had learned about composition. As he grew older, his religious sentiments grew deeper, and he took very seriously the challenge and responsibility that accompanied setting the text of the Mass. Calling it his “greatest” work had as much to do with the importance of the material as with his own compositional achievement. The result is weighty, dense, and complex, all common characteristics of late Beethoven; but he eschews the unusual, even experimental writing that is common in the late quartets and piano sonatas. This gives it a more traditional surface but lacks the sense of idiosyncrasy that can make those works fascinating even when they confuse. Joseph Kernan’s Grove article on Beethoven even suggests that the piece would have a better effect on audience if we didn’t feel the need to hear all of it at once, permitting ourselves the luxury to hear it in excerpts. It is, in short, both spectacular, and something of a slog.

Given that, and the massive resources needed to perform it, Saturday’s well-balanced and thoughtful performance by the Back Bay Chorale at Sanders Theater was a gift. Those only familiar with the work from recordings may not realize how much a live performance improves its effect. The drama of the work is more vivid when it is enacted by performers immediately in front of you; the thick counterpoint of Beethoven’s fugues is easier to track when one can see the sections of the chorus singing. Even something a simple as observing the different groupings of soloists gives the listener something concrete to hold on to as the music spins out to great lengths. The venue was perfectly sized for this: small enough that one can feel in contact with the performers, but large enough to handle the sound produced by over 100 judiciously conducted performers. Back Bay Chorale Music Director Scott Allen Jarrett’s direction was just that: careful but expressive, without any straining for effect. The pick-up orchestra was mostly fine: as might be expected there was some roughness in ensemble and intonation at times, and it took some time for the brass balance to work itself out. These issues improved as the evening developed. There was not a lot of personality in the orchestral sound; it was subordinate to the vocal lines of both chorus and soloists.

The soloists constituted an interesting group with an unusual combination of timbres: soprano Jessica Muirhead is smooth and soothingly powerful, simultaneously commanding and calming; mezzo-soprano Adriana Zabala’s colorful voice was bright and direct; tenor Stefan Barner has a tight, focused heroic tenor; and local fixture David Kravitz’s baritone is immediately recognizable, rich with a touch of graininess. Muirhead’s singing tended to dominate: her voice seemed to have one more dimension than usual, projected into the space around us. Barner seemed ill-at-ease during the opening movements, with a wide vibrato. The ensemble often felt unbalanced during the earlier movements. By the time we arrived at the “Sanctus”, which affords long stretches that feature the solo quartet, the logic behind the selection was clearer: the vastly different vocal qualities created a complex blend that engaged the ear.

The chorus, on the other hand, produced a homogeneous sound throughout, well-blended and subtly colorful. It was a cushiony, thick sound, though in the great fugues, I wished for something a bit leaner, as the counterpoint quickly became difficult to follow after each initial entry. This criticism might as well be leveled at Beethoven, though: one of the great frustrations of the piece is that he wrote these quite learned fugues for a huge ensemble that, by its very nature, makes it challenging to convey its intricacies.

In the end, this performance did an excellent job of elucidating those intricacies: the lengthy “Gloria” and “Credo” were comprehensible and detailed, each new panel of music and text fully realized. The Missa is still difficult to take in as a whole. It lasts about as long as the Ninth Symphony. The Ninth seduces and captivates; on this evening, the Missa was still keeping its distance, perhaps properly for a work dedicated to God and not to man. It is not for everyone: after each movement a few members of the large audience at Sanders decided they had had enough. But the vast majority remained to give a powerful ovation. Perhaps what was missing for us, though, will come from subsequent exposures to performances with full-time orchestras in which we could approach the Missa’s majesty with more appreciation.

Comments Off on Beethoven’s Chorale Tribute to God