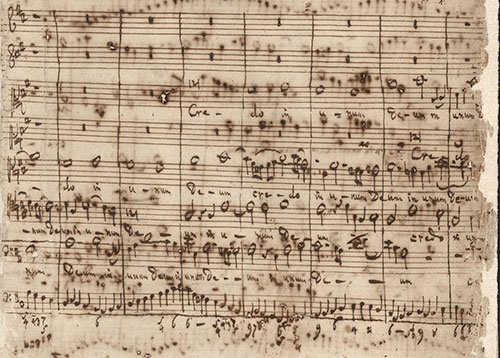 Saturday night’s performance of Bach’s Mass in B Minor by Musica Sacra at First Congregational Church in Cambridge set a very high standard and provided a nice lead-in for next Saturday’s Boston Bach Birthday 330. Now in her 35th year as Artistic Director, Mary Beekman conducted a performance that was deeply thoughtful and moving, reflecting her many decades of her love for the music of Bach. The 25 members of the orchestra played modern instruments. Nevertheless, the concertmistress Julia McKenzie, got impressive results for her solos with historically-informed technique, style and sensitivity. Seated facing the bass and singers, I had some trouble hearing the strings and timpani across the hall. (First Church’s odd acoustics have been discussed many times here before). Other distinguished string contributions came from bass player Susan Hagen, who realized her basso continuo parts with lyric distinction. The oboes, trumpet, bassoons (a little hard to hear at times), and French horn, timpani, and organ were uniformly excellent.

Throughout, Beekman led her superb 30-person chorus through the gorgeous thickets of Bach’s unprecedentedly ingenious counterpoint. In this city with dozens of choruses, Musica Sacra has been, at least in the five years I’ve been reviewing, one of the best. Their performances have often astonished me with their polished, unearthly beauty, and they did so once again. Both their blend and intonation were beautiful, their diction excellent.

The resonant acoustics, while somewhat problematic for the instrumentalists, certainly were favorable for the four outstanding soloists: local favorite Teresa Wakim, who also sang it with Chorus Pro Musica last June; countertenor Douglas Dodson, tenor Eric Christopher Perry, the music director of the new male vocal chamber ensemble, Renaissance Men; and baritone Bradford Gleim (who teaches at Berklee). The hall was full and attention was rapt, as is usual for this magnificent piece.

By now (this makes five reviews of the Mass in the Intelligencer) readers probably know that the B Minor Mass was one of the last things Bach produced, and that it incorporated music he had written over decades. In J. S. Bach: The Learned Musician Christoph Wolff points out “We know of no occasion for which Bach could have written (it), nor any patron who might have commissioned it, nor any complete performance of the work before 1750.”(The first complete one was in 1859). The work is replete with examples of Bach’s embedding his name musically, and with all sorts of number three references reflecting Bach’s fascination by both numerology and his belief in the Trinity.

The Mass opens with a powerful statement of the Kyrie eleison, a 5-part chorus. The first four tones of the fugue subject, Beekman points out in her always enjoyable and intelligent program notes, “are also the letters of Bach’s name makes it all the more impressive.” (They are B-H-A-C rather than B-A-C-H) “The nauseating disorientation of the subject suggests the sinner’s utter abject desperation in begging for mercy, by incorporating the letters of his name in the subject, Bach makes the collective need for absolution a personal one as well.”

Bach used the Gloria in excelsis (5-part chorus), along with the Domine Deus and Cum sancto spiritu, for his Cantata 191, performed in Leipzig on Christmas Day of 1745 to celebrate peace at the ending of the Silesian war. The beginning of the Gloria, Beekman points out, is in D major, “considered by the Baroque Era to be the key of glory, since it was the key of key natural trumpets.” The Mass in B Minor, she comments, is actually a misnomer, as there are more movements in the relative key of D major (Et resurrexit, Sanctus, Et expecto, and Osanna).’. Only five sections are actually in B minor). After the lulling Et in Terra Pax (5-part chorus), Laudamus te featured countertenor Douglas Dodson, who sang superbly, with solo violin accompanied by the other strings in what seems, Beekman writes, “like an imitative competition to see who can exercise the most virtuosity in praise of God.” I’d call it a draw; both were excellent.

The four-part choral fugue, Gratias Agimus Tibi, my favorite piece on the Mass’s first half, happily recurs at the very end of the Mass, with the words Dona Nobis Pacem. Both times it received a wonderful performance by the choir. Next was the ravishing duet for soprano and tenor, Domine Deus, with Teresa Wakim and Eric Christopher Perry, accompanied throughout by a solo flute played expertly by Julie Scolnik. During the Quoniam tu solus Santus, the horn (Clark Matthews) and bassoons (Patricia Yee and Natalie Zemba) supported an aria with the bass Bradford Gleim, who impressed with both an unusually expressive voice and sincere manner. The first half ended with Cum Sancto Spiritu, an ebullient five-part chorus.

After the intermission, Bach showed off his numerological fun-side.  The letters of “C-R-E-D-O” add up to 43, and so Credo in unum deum (a 5-part chorus) has 43 iterations of the word Credo.  Patrem omnipotentem, a four-part chorus, was followed by the duet, Et in unum Dominum, the highlight of the concert’s second half.  Soprano Teresa Wakim and countertenor Douglas Dodson had timbres that worked perfectly together, enabling one to follow their separate lines. Et incarnatus est, (a 5-part chorus) was particularly moving, with its falling intervals in the chorus and orchestra meant to represent God’s descent to the earth. “Typically,” Beekman notices, “these settings emphasize the mystery and wonder of God becoming human, while Bach seems to focus on the tragic end of that life.” Crucifixus, (a 4-part chorus) which ensues, is one of the saddest pieces in the world. Mary Beekman calls it “a statement of a grief so profound that one’s world (is) upended.” Her conducting, particularly of the chorus, was, throughout, inspiring and inspired. It seemed, like most of the 27 numbers that made up the Mass, a perfect tempo. The choir sounded magnificent throughout.

Et resurrexit (a five-part chorus),, in D major, gave the trumpets and timpani a chance to show off, while in the bass aria, Et in spiritum sanctum, Bradford Gleim, who again impressed deeply, was accompanied deftly by two very good oboes d’amore. A five-part choral Confiteor is followed by Et Expecto (a 5-part chorus), which felt to this listener felt the sun bursting out. Triumphantly back in D major, it expresses supreme jubilation at the end to the nine-movement Creed.

Sanctus (a six-part chorus) with its words from Isaiah 6 (“Holy Holy Holy, Lord God of hosts, Heaven and earth are full of his glory”) are themselves full of a plethora of threes, certainly the numerological high point of the Mass. A lovely solo for tenor and flute (often done with violin), who had a fine rapport, sets the text of the Benedictus, and is surrounded on each end by Osannas (eight-part double chorus).

The alto aria, Agnus Dei, adapted from Cantata No. 11 (the Ascension Oratorio) was sung movingly by countertenor Douglas Dodson, and was followed by a haunting performance of Dona nobis pacem, whose tune the audience probably still recalled.

Two difficulties in the orchestra occurred. The bassist and percussionist were sitting at opposite sides of the hall, and it would have helped had they sat closer, and it seemed hard all evening for the orchestra to play in tune with the organ—maybe they had trouble hearing it. Otherwise, it was a very good group of freelancers. That the chorus, soloists, and particularly Mary Beekman were deeply committed to this work showed in every note. They did this monumental work justice, and then some.