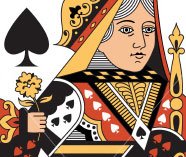 Lowell House Opera has been mounting opera at Harvard since 1938, giving it pride of place as New England’s oldest such company. This spring a combination of professional, student, and community artists will fully stage Tchaikovsky’s Queen of Spades (Pique Dame). Sung in Russian with orchestra and English supertitles, the show will run will from March 25th through April 4th.

The story concerns the plight of Gherman, whose fascination with the beautiful (and betrothed) Liza turns into an obsession with learning her grandmother’s strategy for winning at cards. When the elderly Countess dies without revealing her secret, Gherman’s fixation turns to madness. With a final card game imminent, the Countess’s ghost returns, to reveal the winning hand and exact revenge.

Music Director Lidiya Yankovskaya and Stage Director Roxanna Myhrum are prolific in the local and regional performing arts, with directorships in multiple organizations and ensembles. This is their eighth operatic collaboration in the Boston area, and their fourth consecutive production with Lowell House Opera.

LE: Please elaborate on the challenges, and advantages if any, of mounting opera in the Lowell House dining hall.

RM: This is my fourth Lowell House Opera production, and every year my conversations with our set designer involve some amount of cursing the oversize crystal chandelier that is a required fixture in the middle of our performance space. But every year, the constraints ultimately lead us to creative breakthroughs, such as our decision to frame our production of Britten’s A Midsummer Night’s Dream within a collegiate library setting. It is also inspiring to bring opera to a space where students and live and work, and it is important to me that our productions feel exciting and relevant to the members of the Lowell House community. LHO is also one of Harvard’s biggest collaborations with the outside community. I love that it brings together students, professional singers, and diverse community members in a space that can otherwise seem insular or exclusive. Finally, it is inspiring to be continuing the Lowell House Opera tradition of staging full-scale operas in an intimate performance space. My predecessors have gone on to many different pursuits over the past 90 years, but many continue to support the opera, knowing that it is a unique part of the New England arts scene.

And the look and feel of this particular production?

Our production takes its inspiration from the original Pushkin short story, which ends with the protagonist incarcerated in a mental asylum. We have decided to use this as the starting point for our production, making the opera into more of a psychological thriller than a stately costume drama. Our visual influences include expressionist cinema (our set resembles a scene from The Cabinet of Dr. Caligari) and early film noir, the absurdism of Lewis Carrol’s Alice in Wonderland, and the exaggerated red-white-and-black styles of Alexander McQueen’s Horn of Plenty collection.

What should we know about the singers?

We have an outstanding cast this year. Gherman will be sung by two extraordinary tenors, Mikhail Ursulov (a recent transplant to the US who has sung at the Bolshoi) and Adam Klein (an American tenor who previously sang supporting roles in the Met’s production and for whom this is a dream role). Liza will be performed by the outstanding Moscow-born soprano Zoya Gramagin and Boston emerging soprano Samantha Schmid. LHO fans will also recognize tenor Sean Malkus as Chekalinsky, who played the Tsar in our production of Snegurochka, and bass-baritone Ryne Cherry as Tomsky (Demetrius in A Midsummer Night’s Dream).

This is the eighth full-length opera that Lidiya and I have directed together, and each project has been a thrilling endeavor. We each share a commitment to rigorously interpreting the score, and we both draw on many historical, cultural, and musicological sources to give life to the notes on the page. We’re both known for pushing singers to make strong character choices, and we’ve built up a fantastic team of ambitious musicians and designers who like to collaborate with us. Lidiya also drives us to tackle challenging and unfamiliar repertoire, and in this case we rely heavily on her fluency in Russian, her experience as a diction coach, and her deep knowledge of Russian literature and society. I don’t know that I would have been brave enough to try to wade through a Cyrillic score without her encouragement. More than any other collaborator, she inspires me to work hard, challenge myself, and to deliver my best.

Why The Queen of Spades?

LY: The Russian operatic repertoire is filled with incredible masterpieces, most of which, sadly, are rarely performed in the US. There are many possible reasons for this, including historical hostility between the two nations, difficulty of the Russian language, and lack of familiarity with the cyrillic alphabet, and the fact that most Russian operas call for a large orchestra, cast, and chorus (usually including a hefty number of low bass-baritones, much more common there than here). Tchaikovsky wrote 11 operas, of which only one is regularly performed in the states, with two more (Iolanta and Queen of Spades) appearing only occasionally. Rimsky-Korsakov (whose The Snow Maiden LHO performed three years ago) wrote 15 spectacular operas that are almost never heard here! While I enjoy conducting a wide range of repertoire, given my own background (I grew up in St. Petersburg) and knowledge of Russian I hope to bring more of these incredible works to the states. Most of LHO’s recent productions (in my tenure, Midsummer Night’s Dream, Lakmé, Candide) have been in other languages, so this seemed like the right time to program a Russian work. Tchaikovsky in particular has had a very successful tenure at Lowell House, with an annual performance of the 1812 Overture and with Eugene Onegin being one of a very small number of operas with repeat performances in its 75-year history. The opera is a challenge owing to its large scope and infamously difficult lead tenor role, but it also provides a large number of smaller roles that are ideal for the undergraduates and local conservatory students involved in our performances. Furthermore, there is some very exciting music for our chorus, and interesting orchestral writing. Finding singers with Russian-language experience is a challenge for many companies, but at this point, I have worked with a large number of singers in the area in Russian repertoire with the Tanglewood Festival Chorus, Commonwealth Lyric Theater, LHO’s production of The Snow Maiden, and a recent Russian-language premiere with Juventas New Music. We knew of a large core of singers who had a diction background, making the idea much more plausible. Additionally, we knew of a number of superb tenors who would be interested in performing the role.

How do you put the orchestra together year after year? Does it vary according to repertoire?

The LHO Orchestra is largely a group of devoted instrumentalists who have been playing for the opera year after year, many for over a decade. The group is supplemented by local conservatory students, professional musicians interested in the repertoire, Harvard undergraduates and community members. Our time in the space is very limited, and so the final rehearsal/performance period is extremely intense, with as many as six out of seven days filled with long calls on opening week. Given that Boston is a mecca for talented musicians, the level of the group is impressive given that they are all volunteer. However, taking out as many as five hours per day (operas are long!) six days a week is an incredible time investment for people who have other gigs, jobs, and personal commitments. As a result, we often have a rotating schedule for instrumentalists, with many playing only a portion of the rehearsals and performances. When we performed Britten’s A Midsummer Night’s Dream, we did not rotate players, as the work required a much smaller ensemble and was exceptionally demanding. However, something the scope of The Queen of Spades (our largest orchestra in recent years) requires that we have rotations and even some instrumentalists who will be coming in for the first time in dress rehearsal or performance. This is of course a challenge for me as a conductor, but it is also very exciting, making sure that every performance is fresh and energized. As I mentioned earlier, I am also fortunate in working with exceptional instrumentalists with a level of dedication that never fails to amaze me. I can rely on the fact that they will all take the time to study the score in detail and practice their parts diligently before arriving.

Are you conscious of having to avoid covering singers, since you are not in a pit?

Balance is a major consideration in opera even when a pit is available. On the one hand, not having a pit makes this issue somewhat more challenging, since there is nothing muting the brass. On the other hand, it is a big advantage for the instrumentalists to hear, see and feel everything that is happening on stage; this leads to a more unified collaborative performance and ensures that the orchestra is fully invested in the drama of the work. Operatic performances can often have a stark divide between the orchestra and the singers. Most orchestras in American opera companies do one-off productions, with a small number of rehearsals, and never fully internalize the opera or have awareness of what is happening on stage. Opera is an art form that begins and ends with the drama, and an orchestra that is unaware of the action taking place on stage can never give a fully satisfying performance. Not having a pit means that despite extremely limited rehearsal time, our orchestra is fully aware of everything the singer is doing, able to work alongside me directly with the singer, rather than always getting the information only secondhand.

Roxie and I have collaborated on a large number of projects, generally working together on at least 1-2 productions per year (this season, Queen of Spades is followed by an exciting Juventus-produced and NEA/Cambridge Arts Council-sponsored collaboration entitled Music in Motion that will bring together 100+ years of music with abstract puppetry). I love working with Roxie because like me, she sees the music and drama as a unified whole. Too often, contemporary opera directors (and conductors) view the work of a conductor and a stage director to be largely separate. It is typical for conductors to join a production late into the process and for stage directors to stage works in ways that have little or nothing to do with dramatic elements dictated or suggested by the music. Roxie and I work collaboratively from the very beginning planning stages, making it a priority to ensure that our productions truly represent opera as the Gesamtkunstwerk that it is. Furthermore, we both share a passion for performing challenging, often rarely done repertoire, which has led to some really exciting and unusual projects and collaborations. Perhaps most important, Roxie’s incredible dedication to making dramaturgically informed decisions, her immense creativity, her drive to always find the best dramatic solutions (never stifled by shock value, simplicity, or tradition for their own sake), her deep musical understanding and intuition, and her ability to motivate and lead artists are an ongoing inspiration.

Performances will take place on March 25, 27, 28 and April 1, 3, 4 at 8:30pm on the Harvard University campus at Lowell House, 10 Holyoke Place, Cambridge MA. A black-tie reception will follow opening night. Tickets ($12-$40) may be purchased through the Harvard Box Office (Holyoke Center Arcade, 1350 Mass Ave, Cambridge; boxoffice.harvard.edu; 617.496.2222), or at the door pending availability.