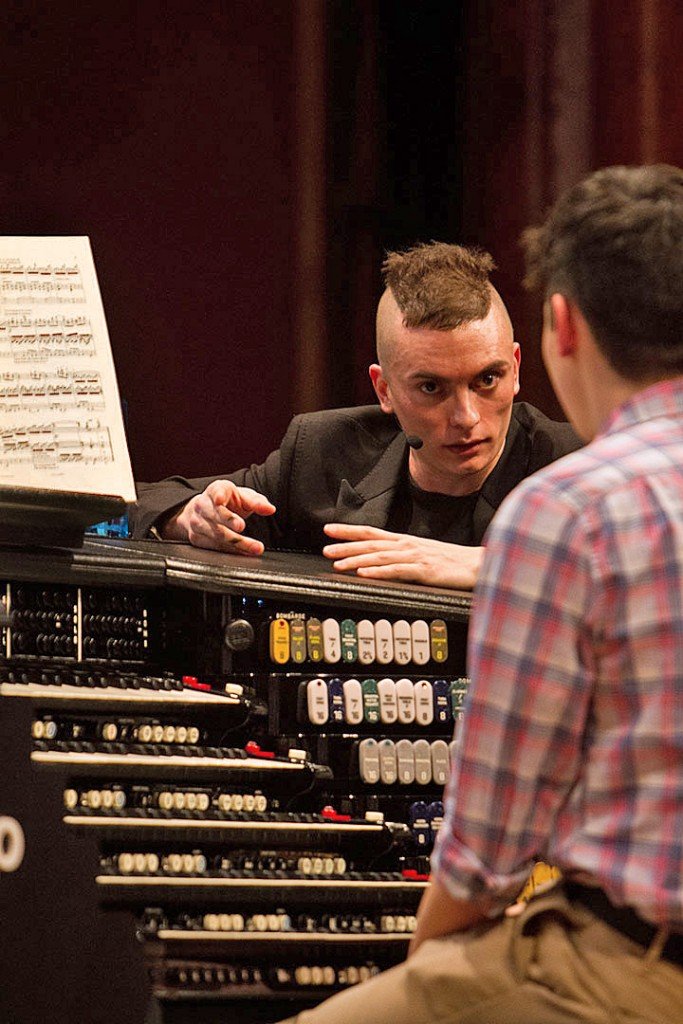 On how to play Mendelssohn (Jake Belcher photo)

“Uh-oh,” was my reaction upon entering the normally staid Sanders Theater for organist Cameron Carpenter’s master class presented by Celebrity Series and the Harvard Organ Society on Wednesday night. On stage, pointing ominously at the audience, 40 imposing floor-standing speakers—some with ostentatious brass projecting horns—flanked the enormous, multi-colored 5-manual Marshall & Ogeltree console. The instrument had more stops and even more pedals than most of us have ever seen. I couldn’t help thinking of the device used to communicate with the extraterrestrials in Steven Spielberg’s Close Encounters of the Third Kind, especially after hearing Carpenter’s four-minute demonstration journey in his very loud dream machine. Considering Carpenter’s Mohawk and orange day-glow high-topped organ slippers, though I began to wonder if the space visitors had come back.

This, I thought, was not going to be your mother’s masterclass. But it was. Carpenter is not only a brilliant keyboard technician, but also an excellent and well-schooled musician who has a lot to share with his fellow organists, and the ability to do so with eloquence and effectiveness. Unfortunately, because of a previous commitment, I was able to only hear the first student: Khristian Erich Bauer-Rowe, a senor at M.I.T. His playing of the third movement from Mendelssohn’s Organ Sonata in F minor, no. 1, op. 65 (Allegro assai vivace) was on a high level, but by word (including an occasional “bulls–t”) and example, Carpenter deftly helped Bauer-Rowe add excitement and drive to his performance. Carpenter zeroed in on some tension he noticed in his student’s forearms, and helped him fix it. A real masterclass this was, and we didn’t even have to board the spaceship to hear it.

The account continues with the observations of Geoff Wieting:

Dennis Chan, organist at Armenian Memorial Church in Watertown, played Hamburger Totentanz (Death-Dance from Hamburg) by Guy Bovet (b. 1942) with mesmerizing rhythm and very colorful registration—a signal achievement given that all the class participants had a scant 10 minutes each to register and practice their pieces on the digital, “cross-genre” Marshall & Ogletree International Touring Organ of five manuals and significantly extended pedalboard. Chan began at a ppp whisper and grew incrementally to a staggering ending. Carpenter wanted it to start even more distantly; Chan achieved this with a still dryer staccato and even softer registration. Carpenter made the important point that although the work shares an affinity with Ravel’s Bolero, it is not a “joke piece” and in fact should be taken “desperately seriously.” Furthermore, he felt (I strongly agree) that on a printed program the title should always have a translation to avoid misinformed references to “the hamburger dance.” Indeed, though he complimented Chan’s accomplished performance, he felt that it was missing an essential demonic or horrific quality. While Chan played through the piece again, Carpenter experimented with changing colors almost every other phrase and encouraged the player to vary his articulation to add a certain mounting insanity. This varying registrations worked well except in places where balance between two hands on different manuals or between hands and feet was disregarded. Chan proved quite adaptable, and in the end the piece packed a near-apocalyptic impact. Though Carpenter was often overly garrulous in the context of a masterclass, he was never dull, having no inhibitions about sharing many tenets of his personal musical dogma, e.g., “There’s a lot to be said for the value in music of violence, vulgarity, ecstatic states, etc.” There was plenty of food for thought.

Noel da Silva (Harvard, ’16), played Maurice Duruflé’s Prelude and Fugue on the Name of Alain, adhering closely to the composer’s specified registrations. He largely coped well with the unfamiliar console in the physically contortionist passages of the prelude. A number of times, though, he’d hit a wrong piston (stop combination) and have to halt, hunt for the right one, and backtrack in the music. The fugue went rather more smoothly, building up power satisfyingly. Carpenter enjoyed the performance, initially saying he had little to criticize (“It is a great pleasure for me to hear this organ played in the ‘traditional manner’ but with emotion”)—then he proceeded to find criticisms. Seemingly trying to improve on Duruflé, he again experimented with different registrations, and again incurred balance problems that the player had not on his own. The recurrent example was long pedal points; in the fugue, these are powerful with harmonies changing rapidly over them, and it’s simply counterproductive to add a huge 32’ sound which all but obliterates these harmonies. It is good to keep in mind that Duruflé’s work is a heartfelt tribute to a brilliant colleague, the organist and composer Jehan Alain, who was killed at 29, early in World War II. While Carpenter undoubtedly has a strong sense of the dramatic aspects of the piece, it’s a pity that he doesn’t appear to have a commensurate appreciation of its more intimate and simple qualities.

Joining a rarefied group of organists, organ builders, aficionados, star-struck fans and the merely curious for the Cameron Carpenter masterclass, I found the electronic organ sounds vivid, clearly layered, colorful and loud, but without the veil of mystery induced by a pipe organ’s interaction with its room. It sounded like a good hi-fi set in a domestic chamber, though certainly not the smallest one in the house.

Carpenter charmed the dubious and comforted the performing victims, but his was not quietly reflective art.

Comments Off on Organists Sit-In at Sanders