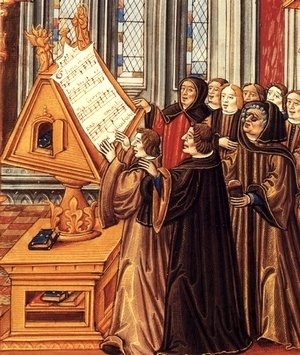 Blue Heron’s OCKEGHEM@600 project got off to a brilliant start Saturday evening in First Church Cambridge as snow continued to fall outside. The vocal ensemble of eight, drawn from among Boston’s most versatile and accomplished singers, was joined by the equally versatile master of bowed strings Laura Jeppesen on rebec and vielle, with music director Scott Metcalfe on another vielle or sometimes a Renaissance harp. Centered on a single Mass Ordinary cycle, the program featured interrelated works by Ockeghem and his 15th-century contemporaries.

In pre-concert remarks, Metcalfe suggested that Johannes Ockeghem was as important a composer, as contrapuntally skillful as Johann Sebastian Bach, if not nearly as familiar to present-day listeners. Sean Gallagher’s pre-concert lecture situated Ockeghem among the large number of singer-composers born during the 15th and early 16th centuries in the Hainaut region spanning northern France and what is now southern Belgium. Born in the village of St. Ghislain around 1420 or even earlier, Ockeghem may have received his musical education at one of the large churches in the nearby town of Mons. By 1443 he was a singer at the cathedral of Antwerp, where he must have encountered some of the English music then beginning to circulate in Europe. English music was admired for its sweet harmonies and its tunefulness; moreover, English composers were the first to produce “cyclic” masses—complete polyphonic settings of the Mass Ordinary (Kyrie, Gloria, Credo, Sanctus, and Agnus Dei), soon to become the most significant large-scale genre of Renaissance composition. In 1451, Ockeghem joined the musical establishment of Charles VII of France. He remained in French royal service for the rest of his life, primarily at Tours in the Loire Valley. Ockeghem was known for his skill as a singer and composer —he had a fine bass voice—and while he left France only on a single trip to Spain, his music travelled all over Europe.

Ockeghem’s reputation as a prodigious technical wizard is based on only a few difficult musical puzzles. It seems to have arisen shortly after his death in 1497 and has persisted to this day. In fact, he composed some 13 Mass Ordinary cycles, including the earliest surviving Requiem Mass, four motets, and numerous secular songs of great beauty and charm. The rondeau “De plus en plus se renouvelle” (More and more is renewed) by Ockeghem’s older contemporary Gilles Binchois (born around 1400 in Bins, also in Hainaut) opened the program. Countertenor Martin Near sang the beautiful melody with a keen sense of its supple rhythms in fluctuating twos and threes, skillfully bringing out the contrast between straightforward syllabic declamation and elaborate cadential melismas. In this performance, the supporting tenor and contratenor parts were played by Metcalfe and Jeppesen on two vielles. Beautiful as the melody is, however, it was not the upper-voice tune but, following 15th-century practice, the supporting tenor part that served as a unifying cantus firmus in the tenor of all five movements of Ockeghem’s Missa De plus en plus, the focus of Saturday’s program. The tenor melody is quoted sometimes in its original form, sometimes ornamented, sometimes in longer note values; this artful structure is not really audible to the passive listener, but surely meaningful to composer and performer alike. Is the poetic text addressed to an unattainable lady, or to the Virgin Mary? Such mingling of sacred and secular may disturb or puzzle us, but was will have been viewed as a source of aesthetic and spiritual enrichment (and occasional humor) to medieval and Renaissance minds.

Speculation aside, Blue Heron’s performance of the Mass set out to convince us of the power and beauty of Ockeghem’s music: the intricacy of his overlapping melodic lines, avoiding simultaneous cadences, the rhythmic vitality of independent parts that never conform to regular downbeats. All eight singers (mezzo Pamela Dellal, countertenor Martin Near, tenors Aaron Sheehan, Mark Sprinkle, Jason McStoots, and Owen McIntosh, baritones Sumner Thompson and Paul Guttry) were on hand for the opening Kyrie. All of them are accomplished soloists yet exquisitely attuned to each other; singing without a conductor, their sound was well-matched yet never blandly homogeneous. Two different quartets performed the lengthy Gloria and Credo. With just one voice on a part, extended duets and trios for various combinations of voices contrasted with full-voice passages with the tenor participating. Borrowing Binchois’s tenor as a cantus firmus was one way to honor an older composer. Ockeghem also composed a eulogy on the death of Binchois in the form of a ballade: three stanzas praising him as a servant of Rhetoric and Music, eloquently sung by Owen McIntosh, with the three lower voices (Sheehan, Thompson, and Guttry) intoning a line from the Requiem.

Once again all eight singers took part in the concluding Sanctus and Agnus Dei from the Missa De plus en plus, but here again there was considerable timbral variety, with long duets and trios articulating major divisions of the text. The final “Dona nobis pacem” was a glorious conclusion, with the Binchois tenor quoted once again in its entirety.

Ockeghem himself could hardly have asked for a more enjoyable and enlightening presentation. By juxtaposing a single mass cycle with its many interlinked secular songs, Scott Metcalfe and Sean Gallagher succeeded in bringing this seemingly opaque composer into focus as an immensely skilled figure of his own time and place, while Blue Heron’s masterful performances brought his music to life in all its intricate glory. A note of thanks is also due for the handsome program book, complete with texts, translations, informative program notes, and an illustrated page explaining the instruments. We look forward to more Ockeghem as his 600th anniversary approaches.

Comments Off on Obscure Contrapuntalist Revealed