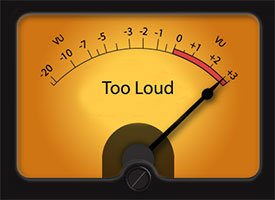 From psst to ffft and beyond: Everything you always wanted to know about -issississimos, piano and forte, from BMInt’s resident Deep Thought.

Dynamic markings like piano and forte go all the way back to Gabrieli’s 1597 Sonata pian e forte and Vincenzo Capirola (1474 – after 1548), but the earliest scores in which I can find p and f are of Baroque keyboard music, and even then I can’t be sure that it was not a 19th-century editor who put them there. Even a big organ work like Bach’s B-minor Prelude and Fugue S.544 doesn’t need them, because pro organo pleno says it all at the beginning. I’ve played that piece on half a dozen instruments and never deployed all the stops available on any of them, but neither did I feel I was depriving the listener of full organ sound. I mention this because I mostly want to consider how composers use the fff marking and why.

There isn’t such a thing as “absolute dynamics” in the same way that there is absolute pitch. Acoustical power capability, as conventionally measured in decibels SPL (for sound-pressure level), ranges enormously among instruments, and an ff middle C on the flute is entirely different from an ff middle C on the trombone—yet examples of both can easily be found in scores. A simple illustration of relative dynamics is found in the second movement of Mahler’s Fourth Symphony. At m.36 the upper melodic line, in muted first violins marked pp, reaches a top note on F, which is accentuated by a doubling note in the harp, marked ff, but this fortissimo is perceived as a delicate nudge, not as an abruptly interrupting change of overall dynamics. The passage repeats at m.147, with different doubling: two flutes (pp) and solo violin ff—an emphatic gesture, but still not loud. A third occurrence, at m.186, is a more forceful doubling: two high clarinets (f ) and harp (ff), and the fourth and final occurrence (m.315) has the high F doubled only by a pizzicato solo violin, fff. Comparing all these instances in full score, one also observes the manifold dynamic signs in the accompanying parts, all of which testify not only to Mahler’s attention to detail but also to his practical awareness, as a thoroughly experienced orchestral conductor, of what is likely to sound clearly and effectively.

The first composer I know of to write fff is Beethoven, and he used this indication sparingly. It’s significant, I think, that fff appears three times in the Leonore Overture no. 3. The first of these marks what I consider the all-time great page turn, at pp.3-4 of the Eulenburg mini score, where there is a pp with cresc. mm24-26, and then right after the page turn, the full orchestra sounds fff, with raging 64th notes in the violins. The fff appears again in the Presto coda, at m.534, and (in the Gesamtausgabe but not the Eulenburg) once again at m.610, on a strident dominant ninth. It’s interesting to consider what the fff marking means in this great overture, where the development of two motives is as relentless and intense as anywhere in Beethoven’s “heroic” period and where ordinary ff climaxes are abundant. (Leonore no. 2 shows one fff, at the corresponding location of the first coda climax.)

Where else in Beethoven? In the symphonies, fff appears first in the finale of the Seventh, at the climax of the coda, and is repeated in close succession—a digression to subdominant harmony that prolongs the intensity of the climax. In the first movement of Eighth Symphony, fff is marked at the downbeat of the recapitulation (m.90), a big tonic 6-4 with the main theme in the bass. (By way of thanks, just seven bars later the marking is p dolce.) We find fff again at m.349, on a big augmented-sixth chord, just before the final Codetta.

And in all of the Ninth Symphony, the fff marking is nowhere to be found. The extra bite of might is never needed. In fact, the only other fff I know of in Beethoven is in his “Zapfenstreich” March for band, WoO 20. The fff you may see in the final measures of the Pathétique Sonata, op. 13, was added by Hans von Bülow. (See here and here for coverage of the Borromeo String Quartet’s Nicholas Kitchen commenting on Beethoven’s quartet dynamics.)

Later composers seem idiosyncratic in their use of fff. Chopin employed fff fairly frequently, even in his early works. In Schumann’s music I find fff rarely and only in the piano music. Berlioz, who was meticulous about dynamic markings—witness pppp presque rien in the Symphonie fantastique—never wrote fff as far as I can tell, not even in the most overpowering masses of sound in the Requiem. In all of Wagner I find only one fff, at the raptured greeting of the lovers in act II of Tristan und Isolde, and this after a very long crescendo that peaks at ff. It seems that not even the gods of the Ring can conjure up a triple-forte dynamic; but this means only that Wagner was confident that his instrumental sound, with extra woodwinds and brass and all the strings he could fit in under the Bayreuth Festspielhaus stage, was enough.

The Farandole in Bizet’s l’Arlésienne Suite no. 2 (which, let us remember, is by Guiraud even more than Bizet) grows all the way to fff and then ffff, and it is roughly contemporary with Tchaikovsky, who used fff abundantly in his symphonies, some would say too much. (For the opposite extreme, everybody knows the pppppp for bassoon, impossible by any standard, in the Pathétique Symphony.)

Those who believe that Debussy composed only quiet and delicate textures should be reminded that his musical Impressionism included La mer, in three movements, all of which contain notable fff climaxes, whether the seas are stormy or not. There are one or two other instances of fff in Debussy, including the early Fantaisie. Ravel wrote fff in Rapsodie espagnole and Le tombeau de Couperin, but his greatest fff is at m.435 of the Daphnis et Chloé ballet, when Chloé is suddenly seized by the marauding pirates. (Munch’s recording with the BSO of the sudden crescendo is still terrifying.)

Plenty of other composers have employed fff richly. Stravinsky’s early ballets show it selectively: in Firebird, not until Kashchei the Immortal appears midway through the story; in Petrushka, fff is used in a tutti when a group of drunks reel across the stage, and again when Petrushka curses his fate (trumpets); in The Rite of Spring, even in the fullest orchestral tutti one finds fff for accentuation of single notes or chords or to emphasize a particular line (like the melody in four high horns, bells up, in the Ritual Action of Part II, where the rest of the orchestra is only f or ff). At the famous Entrance of the Oldest and Wisest One in Part I, with 34 staves of music on the page, the piccolo clarinet, trumpet 3, and three trombones are marked fff with accents, but are almost inaudible; the quite inaudible first violin line is marked fff, which Stravinsky later said was “badly overbalanced”; what one hears above all are the four horns marked f non tanto and the four tubas marked ff maestoso.

In Mahler, my favorite fff moments are mostly in the First Symphony, especially the snarl in the violas just before the last Steigerung in the finale. I don’t know Richard Strauss’s music well enough to speak with authority about his dynamic markings, although the cymbal fff in Till Eulenspiegel is a stroke of genius; I do recall that he once spoke to the orchestra (120 players) before a rehearsal of Elektra to say, “Please play very, very softly, because it’s all composed so loud.”

I know of some composers who work with total serialism, idealistically subjecting dynamic markings to gradations pari passu with the 12 pitch classes, from pppppp to ffffff. But the last word in ultra-forte is probably Charles Ives’s (of course), at least in print: his Varied Air and Variations (Study no. 2) for piano show a C-major fanfare marked with 15 fs.