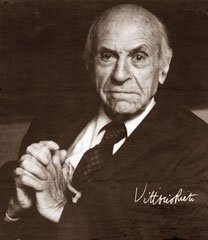 On the occasion of his recent CD release, BMInt’s own Mark Kroll authored this essay on a neglected composer.

Contemporary harpsichord music is not oxymoronic. Modern composers became fascinated by the sounds and colors of the harpsichord and began to write new music for this “old” instrument almost as soon as it was supposedly rescued from extinction at the end of the 19th century (hint: it wasn’t, but that is for another article). And BMInt only recently published a feature on Antico Moderno [here], a group formed to encourage new music for old instruments. Delius, de Falla and Poulenc were among the first, and since that time just about every major composer has written one or more works that feature the harpsichord, either as a solo instrument or in ensemble. They include Milhaud, Stravinsky, Piston, Martin, Orff, Carter, Ligeti, Berio, Gorecki, Xenakis, Schnittke, Gubaidulina, and Schuller, to name just a few. Vittorio Rieti was by far the most prolific. He wrote more works for the harpsichord than any other modern composer, and his treatment of the instrument is among the most idiomatic since the 18th century.

Rieti was born in Alexandria, Egypt on January 28, 1898, to an Italian-Jewish family that could trace its roots back to the 14th century. His father ran a successful export/import business, enabling Vittorio to grow up with butlers, tutors in Italian, French and English, and tennis and piano lessons. Despite his son’s prodigious musical skills, Rieti’s father expected his son to take over the family business, and shipped him off to Milan’s Luigi Bocconi University in 1912 to study economics. Vittorio dutifully returned to Egypt in 1917 with a doctorate (his thesis was on the economy of Turkey), but he soon abandoned business for the world of music. Resettling in Rome with his family after World War I, Rieti had some lessons in orchestration with Ottorino Respighi and studied composition with Alfredo Casella, who took the “young Egyptian” under his wing, along with two other important Roman musicians, Gian Francesco Malpiero and Mario Castelnuovo-Tedesco. Rieti reminisced about this period of his life in a speech he gave at the Longy School of Music in Cambridge, Massachusetts on June 9, 1990: “I was first introduced to the musical world by Alfredo Casella, who was one generation earlier. Casella conducted a concerto of mine for woodwinds and orchestra [i.e., composed in 1923] in a festival of contemporary music in Prague in 1924. That was the beginning of my career, because the festival was attended by many conductors who took an interest in my music and performed it all over the world.” Three of those conductors were Fritz Reiner, Willem Mengelberg and Arturo Toscanini.

A year later Rieti moved to Paris, ground zero at the time for all that was new and exciting in the arts, joined the staff of Sergei Diaghilev’s Ballet Russes and enjoyed immediate success with his first ballet, Barabau. The choreographer was the 21-year-old George Balanchine, also working on his first ballet. Rieti quickly became a member of inner circle of the most important musicians and artists living in Paris at the time, and forged artistic relationships and life-long personal friendships with composers such as Milhaud, Poulenc, Sauguet and Honegger. Stravinsky was a particularly close friend and colleague. For example, in 1928 he asked Rieti to be one of the four pianists (the others were Poulenc, Georges Auric and Marcell Meyer) to play in Diaghilev’s production of Les Noces. Rieti also maintained ties with Berg and Schoenberg in Vienna and Hindemith in Germany during this period.

The intentions of the Nazis in the 1930s were becoming increasingly evident, however, especially with regard to Jews, and Rieti was finally able to emigrate to New York in 1940 with his wife Elsie (Rappaport) and son Fabio (now a highly-regarded artist in Paris). The other members of Rieti’s family who had remained in Europe were not so lucky, as we read in a letter to Darius Milhaud of November 17, 1944:

…My mother was taken by the Germans from San Remo last May and carried to an unknown destination. All investigations are in vain, my sister tells me. My mother had been 74 years old, and with her she had brought her brother (81) and her almost blind sister (92 years old)…I am not going to fool myself. I am in despair…my mother had not hidden, believing that their 247 years would protect all of them.

Rieti’s mother, uncle and aunt were ultimately murdered in the concentration camps.

Safe in New York, Rieti was able to keep on composing until the last years of his life. He also remained faithful to the neo-classical style, which he probably inherited from Stravinsky in Paris, long after most composers had abandoned or transformed it. As Rieti himself remarked in 1973, “I maintain the same aesthetic assumptions I have always had. I have kept evolving in the sense that one keeps on perfecting the same ground.”

The harpsichord (finally! —the reader is probably thinking) was perhaps the ideal instrument with which to invoke the neo-classical sound. Rieti expressed his admiration for it early on in his career, intending to write a harpsichord concerto for Wanda Landowska in 1930. That plan was abandoned because of the political events of the period, and the work was later transformed into his first Piano Concerto (1937), but Rieti never lost his fondness for the harpsichord. If anything he became more enamored of it, and as his affection increased so did his skill in writing for it. Over the next sixty years Rieti would publish eight instrumental works that feature the harpsichord.

Rieti’s death in 1994 was greeted with little notice, even though it represented the passing of the last representative of neo-classicism in the 20th century. But one can imagine that this would not have troubled this private and reserved man. As Robert Fizdale, a close friend and a member of the duo-piano team Gold and Fizdale remarked: “Vittorio never suffered from the American disease of having to be a success.” He also left a lasting legacy of harpsichord music and other works in his very personal style, which was eloquently described by his old teacher Alfredo Cassella: “Rieti’s oeuvre stands apart in its specific clarity, gaiety and sophistication of a kind only he possesses, yet it hides a good deal of melancholy.”

An important proponent of Rieti’s music was the wonderful violinist, the late Janet Packer. She performed and recorded many of Rieti’s works, including the Serenata per violino concertante e piccolo orchestra (1931) on CRI. Mark Kroll has just released a recording of almost all of Rieti’s harpsichord music on New World Records [here]. It includes Israeli-American harpsichordist Marina Minkin, violinist Carol Lieberman, and noted instrumentalists in Israel.

Mark Kroll’s book Ignaz Moscheles and the Changing World of Musical Europe was just published by Boydell and Brewer (here), and the French translation of Playing the Harpsichord was published by Le Tourdion in France (here). He has recently returned from playing harpsichord concertos of Carlos Seixas and J. S. Bach in Salt Lake City.