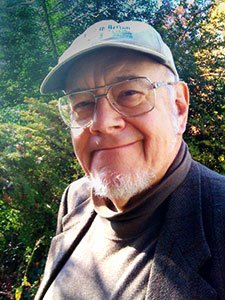 Birthday parties are fun, and those with live music even more so. When the music is a series of premieres by the honoree performed by first-rate artists, one can get rather giddy at the prospect. Such were the circumstances at Tufts University’s Distler Hall on January 25th, when friends, colleagues and family gathered to honor Mark DeVoto, retired professor, composer, musicologist, irrepressible wit, raconteur, and author of 106 articles and reviews for this site, in celebration of his recent 75th birthday.

A couple of years ago, Harvard Musical Association President (and BMInt Publisher) Lee Eiseman asked DeVoto to contribute a variation on the HMA’s “theme song” as part of a composite variation set by 8 composer-members of HMA. This exercise seems to have triggered the revival of DeVoto’s creative mojo: in short order he had completed several other works, which were performed Sunday by an impressive array of talent, namely pianists John McDonald and Cagdas Donmezer, soprano Karol Bennett, clarinetist Ray Jackendoff, violists Anna Griffis and Will Myers, and cellist Emmanuel Feldman.

The program opened with Donmezer’s poker-faced performance of Gschoppin, DeVoto’s musical “proof” that Scott Joplin’s rigorous classical piano training exposed him to Chopinesque harmonic and melodic influence. What the piece consists of is the Chopin Impromptu in G-flat, Op. 51, reimagined as a rag, and the title an elaborate pun on Chopin and “Ges,” the German word for G-flat.

The outright hilarity of Gschoppin was followed by a wittily serious entry, a trio for clarinet, cello and piano (McDonald), with an erudite and highly chromatic slow passacaglia finale preceded by a flashily rhapsodic opening Maestoso pomposo and a fleet scherzo-like Allegro non tanto. After intermission came Three Pieces for Two Violas, exploring timbres and textures in viola playing, with the second movement a kind of “Stravinsky Meets the Minimalists” and the third an essay in an Expressionist esthetic like that of his scholarly subject Alban Berg, which nevertheless always finds its path to a tonal solution. Finally, Bennett and McDonald performed a set of eight songs on poems of Emily Dickinson, which found widely variant accompaniments (really commentaries) on Dickinson’s spare and deceptively placid or breezy verses. It was great to hear this once-indispensable duo, as no modern composer could want better advocates. Bennett’s 20 years at Rice have been a real loss for Boston.

As wonderful as all these pieces and performances were, the best news of the day was that DeVoto is back in form, suited up and ready to provide, like artists as varied as Saint-Saëns and Carter, a new flush of creativity at a time of life when many hang up their gloves and cleats. The baseball analogy here is not random: when presented with flowers at the end of the concert, the laureate donned his otherwise ever-present baseball cap (brim forward).

Comments Off on BMInt Celebrates Its Own