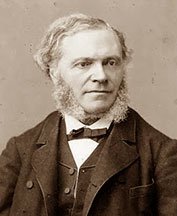 For at least a couple of my adolescent years during the 1950s, when I was studying the organ, César-Auguste Franck (1822-1890) was my favorite composer. Sixty-some years older now, I retain a fondness for his music (e.g., see my recent review of Inon Barnatan which inspired this essay here). In 1990, when some critics observed that the centennial of his death had passed almost completely unnoticed, I thought wistfully of how the Belgian-born master, who more than any other was responsible for launching the revolution in French music from within, had faded. As recently as the 1930s, Harvard’s Music Department offered a semester course called “Brahms and Franck,” and in the 1950s and ’60s, Franck’s D Minor Symphony and his tone poems were regularly programmed.

French music in the 19th century generated its great figures in roughly 20-year cycles: Berlioz, the inventor of the modern orchestra, was born in 1803, Franck in 1822, Chabrier in 1841, and Debussy in 1862. It was the War of 1870 that precipitated the modern era in French music, with the establishment of the Société Nationale, the founding of the Lamoureux and Colonne orchestras, and the maturity of César Franck, great organist, late-blooming composer, and teacher at the Paris Conservatoire who inspired an entire younger generation of composers. Ironically, he had been appointed not to the composition faculty but as professor of organ; this didn’t seem to matter, because young composers gravitated toward him as he began to produce the concert music that assured his reputation. If one can judge from the various biographies, the gentle pater seraphicus, as d’Indy called him, was one of the most adored composition teachers of all time—maybe even more than Schoenberg.

Franck married Félicité Desmousseaux in 1848, and there is a nice story about how the couple had to climb over the Paris barricades to reach the church during the June Days. (I don’t believe the legend that Franck’s wife discouraged him from composing anything but religious music, but another admonition attributed to her sounds more plausible: “César, you modulate too much.” This complaint has been echoed by critics for at least a century, without much justification.) From all accounts, his happy family life diverted him from a career as a virtuoso pianist; instead, he sought the position of organist at the recently-built church of Ste.-Clotilde, where he was appointed in 1858, and where, the next year, a three-manual instrument was built to his specification by the great French builder Aristide Cavaillé-Coll. Within four years he completed his Six Pieces for organ, which marked the beginning of his mature years as a composer; Three Pieces followed, in 1878; and in 1890, just before his death, Three Chorales. These works are at the core of every organist’s Romantic repertory.

Franck’s earliest compositions show kinship with forgotten organist contemporaries like Alexis Chauvet, Jacques Lemmens, and Édouard Batiste, and also piano virtuosi like Charles-Valentin Alkan, to whom Franck dedicated his Grande pièce symphonique for organ. (I am convinced that Franck’s Variations symphoniques, in their final measures, in F-sharp major, was inspired by the last measures of Alkan’s Quasi-Faust, also in that key; but Alkan might in turn have been inspired by the last movement, also in that key, of Franck’s early cyclic Trio concertant, Op. 1 no. 1.) A greater influence on Franck’s art was Liszt, another deeply devout Catholic who composed large-scale sacred choral pieces and big organ works. Liszt heard Franck improvise at Ste.-Clotilde and was astounded, comparing his skill with that of Bach.

Franck’s profound religious feeling certainly affected his art, and he may have regarded his huge oratorio, Les Béatitudes, as his greatest accomplishment. He spent a decade perfecting it before 1879, but it wasn’t performed complete until after his death. Although a piano score in English was published by Schirmer, I have never heard of a performance anywhere in the USA in the past 50 years or more. The only sacred music of Franck that is known everywhere today is the Panis angelicus (1872) from the Mass for three voices, and this lovely little piece has been hacked to the point of mawkishness. (Some lucky choirs will latch onto Franck’s stirring setting of Psalm 150, the musicians’ psalm.) It’s clear that all of Franck’s sacred music needs to be reexamined; it includes several major works, for example Rédemption, whose symphonic interlude sometimes makes it onto concert programs—it is very Wagnerian, but that hardly makes it less likable. Franck even wrote four operas which are never heard, two early and two later; somebody should give us a report on them.

Franck’s art is not so important for its formal innovation—he was an early pioneer, with Liszt (and indirectly Schubert), in making the cyclic principle central to his large-scale forms—nor even for his contrapuntally derived chromatic harmony, which shows some influence from Wagner, and much more from Bach, but is really sui generis. Rather, Franck is important because he is a true original, and because of his profound influence on French music generally, not just as teacher but through the example of expertly crafted works, music that heralded a Gallic revival and appeared at a time when the only significant Austro-German contemporaries were Wagner and Brahms.

Franck’s students include some of the best composers of their time, such as the prolific d’Indy, founder of the the Schola Cantorum and a renowned teacher, but not much heard today; Chausson, who composed a fine Franckian symphony and the stunning Poème de l’amour et de la mer, and died too young; Duparc, who stopped composing 48 years before his death; and Vierne, organist at Notre dame who was part of a later generation (and became Nadia Boulanger’s teacher). Those contemporaries who weren’t Franck’s students include several who supported him, such as Saint-Saëns, much more conservative but a flawless craftsman, and Chabrier, another original, who gave the oration at Franck’s funeral. There was the solitary Debussy, too, 40 years younger than Franck, who is reported have come to a couple of Franck’s classes and found them not what he wanted—but who acknowledged his admiration of the composer all his life.

I recommend a fresh hearing of all the works I’ve mentioned. The Béatitudes are even available in modern recordings. There’s also a recent biography, though written with a certain exaggerated imagination, it looks pretty good: César Franck: His Life and Times, by R.J. Stove. And somewhere I read a probably apocryphal story about Franck that tells you something: His son came into the livingroom to find Franck engrossed in a book. “What are you reading, Father?” “Oh, it’s called Critique of Pure Reason, and it’s very very funny.”