The members of the Longwood Symphony Orchestra, being mostly non-professional musicians from the medical and research community, come with an impressive array of initials after their names, MD, PhD, DMD, and so forth, to which one ought to append one more: OCD. That’s because the amount of work they must put into the practicing and rehearsing needed to pull of performances as consistently professional in quality as they turned in at their Jordan Hall concert on Saturday, on top of their intense day jobs, can only be explained by an obsession with perfection. That, plus the fact that an insane level of musical activity is what keeps them sane.

The program on Saturday began with an experiment: Mozart’s Serenade No. 6 in D major, K. 239, known as the Serenata notturna (one of those copiously redundant phrases like “the old Ponte Vecchio bridge”). One of Mozart’s most popular earlier works, this serenade is structured rather like a Baroque concerto grosso, with a string quartet (at this performance, featuring LSO members Anna Katherine Barnett-Hart and Justin Lo, violins, Jon Epstein, viola, and—except for the last movement cadenza taken by Music Director Ronald Feldman on the cello—Al Tedesco on contrabass) forming a concertino that contrasted with the orchestral backdrop.

That Feldman sat with the orchestra was part of the experiment; the rest was that the reduced LSO forces for this piece performed unconducted. This they did quite well, achieving, it should go without saying, perfect ensemble and a fine élan. The concertino played with firmness and strength in the opening march (there’s a famous bit in this movement where Mozart has them arrayed against a beautiful pizzicato accompaniment, which they all rendered perfectly), and were charming in the trio of the minuet, where the orchestra was tacit. They got to shine as soloists in the concluding rondo, where each had a little cadenza (somehow we suspect that the harmonic on which Feldman ended his might have been an interpolation). As leader of the concertino, Concertmaster Barnett-Hart was both perky and refined.

At a more “normal” Classical-era staffing level, and under Feldman’s baton, the LSO continued with Mozart’s Concerto for Flute and Harp, K. 299, which Mozart wrote for the Parisian Count de Guines and his daughter, who were both talented performers on the respective solo instruments. This concerto, which program annotator Steven Ledbetter described as more like a sinfonia concertante (not sure we agree—there’s quite a bit of solo and duo playing and each movement has a cadenza), is certainly not one of Mozart’s deepest utterances, but it is a charmer. The writing for the solo instruments does not particularly cater to the amateur status of the initial performers, and in particular we have it on competent authority that the harp part is challenging. In NEC’s Paula Robison and the BSO’s Jessica Zhou the LSO got the area’s two leading performers on these instruments, and they gave as much satisfaction as one would imagine anyone could. Robison provided a muscular, forward sound with a narrow vibrato, and yet produced truly lovely lines in the slow movement. Zhou delivered Mozart’s quite pianistic harp line with bravura flourishes. Both soloists gave the appearance of having a jolly good time of it. Feldman led the orchestra with suavity and grace, giving full measure to Mozart’s meticulously realized refinements of sonority and balance. The pizzicato passage in the finale was crisp yet delicate, and we especially commend the horn section’s work in the first movement.

The post-intermission half was given to a work once heard frequently but now a rarity, by a composer about whom the same may be said: the Symphony No. 2 in D-flat Major, Op. 30 by Howard Hanson. It was written in 1930 on commission from the BSO for its 50th anniversaryin company with such classics as Stravinsky’s Symphony of Psalms, Hindemith’s Konzertmusik and Prokofiev’s Fourth Symphony. Hanson, for 40 years the Director of the Eastman School of Music, was one of the standard-bearers for the American Romantic School, featuring solidly tonal harmony (with decorative and punctuational dissonances), broad melodies and spacious chord changes evoking our continents vast plains. Comparable figures include Roy Harris, Douglas Moore, and Hanson’s student Robert Ward. The Symphony No. 2 bears the subtitle “Romantic,” and it is this sense, rather than the chivalric one that informs the subtitle of Bruckner’s Symphony No. 4 (though Hanson tips his hat to the Austrian by using the “Bruckner rhythm” in places), that applies. 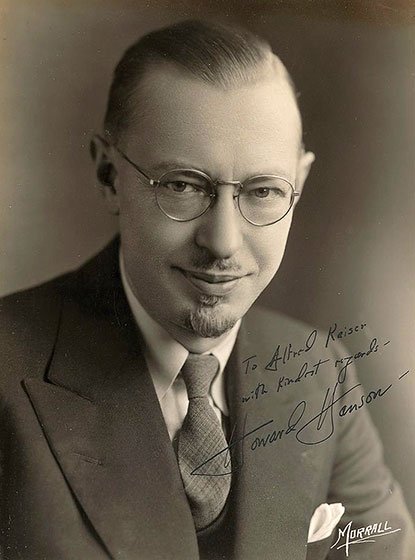 There is an interesting historical footnote that links the Mozart concerto and the Hanson symphony: as Ledbetter reported, Mozart was stiffed for his commission from M. le Compte (a hazard for anyone dealing with the aristocracy in those days). It seems that the great lyric theme in the Hanson—long known as “Interlochen” from its traditional placement at the end of each concert at the Interlochen music festival—was inserted into the soundtrack for the 1979 movie Alien, but nobody bothered to tell Hanson about it or, presumably, pay him for the rights. The program note speculates about how Hanson would have reacted to this use of his music, but there is no reason to speculate—he knew all about it, was royally PO’d, and was preparing to sue, but ultimately decided not to bother.

The three-movement symphony, for large orchestra and scored for a lush, rich sound, got off to a great start with opulent brass and creamy strings, with all stops pulled for that “Interlochen” tune. Many have heard the influence of Sibelius in Hanson’s music, and while some is evident in the development of the first movement and in the slow movement, there are also traces of Holst. The final chord of the opening movement was a thrilling pianissimo (our one complaint in the performance was the inadequacy of the dynamic contrasts such an orotund score needs to shape and define it). The slow movement was full of beauty; most of the thematic material for the symphony comes from a descending melodic nodule over a major third, but Hanson created a fair amount of diversity without ever really letting go of that big melody, which recurs in all movements (when you’ve got a great tune going, just flog it). The one surprise in the music was the wintry backdrop created by the opening string and wind figure in the finale, against which the brasses intone a broad theme. The whole work creates a sumptuous feel and great sonic satisfaction. The performance by the LSO and Feldman was superb, with special shout-out to the brass section, which carried much of the musical argument throughout.

As with all LSO performances, this one was a joint production with a health-related charity, for which it serves as a fundraiser. This time, the beneficiary partner was Caron Treatment Centers, whose focus is on a medical approach to drug and alcohol addiction.