Antico Moderno, a new Boston group whose unusual purpose is to commission contemporary music for historical instruments, will commence activities by juxtaposing “Antico” masterpieces of Vivaldi and Bach with “Moderno” compositions by Honstein, Schlossberg, and Karosi, on Friday, December 5, 2014. The ensemble kicks off its residency at First Lutheran Church in Boston Friday at 7:30. Several of its members contributed to a discussion.

Jacques Lee Wood: Antico Moderno is Latin for old and new—sort of at the same time. The idea came about when several of us started immersing ourselves in studying historical practice. We felt it would be similar to exploring new music. We realized composers have great material to draw upon in historical practice that they could use in their own work, from the sound of gut strings to the different incarnations of a lower or higher base pitch. Also performance practices like using temperament as an expressive compositional device, or creating new systems of ornamentation. People spend a lot of time on how to ornament, how to create music in context; there’s a lot more focus on the performer in this process of composition, rather than having composer and performer be separate. So one of the ideas of Antico Moderno is to work closely with composers to have them be really integrated into the presentation processes.

Balint Karosi: I was very interested in historical practice and the creative aspect of it, particularly studying improvisation in Baroque style. That’s an aspect of musicmaking that I try to somehow implement in my compositions as well: how to create something new from a process you study, and apply to the concept of ornamentation. The extended version of ornamentation is diminution, when you let loose—making up counterpoint on the spot. Some of those ideas go straight into my pieces. These things are tied directly into my story as a composer, and I look forward to exploring them with this group.

Megumi Stohs: What drew me the most was the sound and the feel of period instruments. To me, there’s an immediacy that comes from playing on gut strings, and a freedom. I feel like when you’re playing period music there’s more responsibility on you for the interpretation that maybe isn’t what a typical composer tends to expect. I love thinking about all the sounds that could be created that haven’t yet been created for these instruments.

Does new music for old instruments sound like new music?

Karosi: The concert is titled “Reflections” and it reflects an important aspect of our mission: How living composers relate to older repertoire. What do they make out of it? What kinds of sounds of the older styles reverberate in modern composers? We have three composers responding to three famous pieces of older repertoire in their own ways, and we’ll hear those responses side by side. For instance, Robert Honstein’s work, Night Scenes from the Ospedale, refers to Vivaldi’s L’Estro Armonico, which were very influential pieces for Bach as well. Rob reacts to them with a series of evocative sounds from a seaport: you’ll hear scratching boats and waves and a nocturnal cello solo, a harpsichord and bass duet on a boat .… In my own piece, I froze in time certain aspects of the Bach trio, certain compositional procedures that I focus on and expand. The first movement, “A Place To Stay,” has a certain sweetness, a folk-tune-like character of certain Bach harmonies, where he stays in one key for a long time: I focus on that one aspect. In the second movement I focus more on the harmonic development, the chromatic harmony Bach is so famous for. And in the third, interspersed with the Bach trio, I focus on the rhythmic aspect of the fugue. I think this concert is a good way of looking into how this old music still resonates and inspires modern composers.

Is playing it on on modern instruments forbidden?

Karosi: It would certainly sound much more direct, drier. Obviously, the harpsichord has an important function of my piece; the part couldn’t be played on piano, for example. And the gut strings bring the whole immediacy, the whole naivete, of the piece, to a higher level. Some of the melodies I write would sound almost stupid on a modern instrument; but on these older instruments the sound remains honest.

Stohs: If we think about the whole ensemble as one instrument, there’s a perfect balance between the strings and the harpsichord. I can’t imagine that balance existing with modern instruments.

Wood: We also would put a special filter on if we were playing on modern instruments. We’d probably vibrate more, sustain more, look for a clear and piercing sound. But if we put on an early-music filter, we wouldn’t use vibrato by default. We’d look for a warmness or resonance of sound, bring out dissonances more, take inequality of beats. It’s a whole set of parameters that would change. So you could play, say, Balint’s piece on modern instruments, but your entire approach would have to be different.

What plans does the group have for connecting with other composers ?

Wood: There are a lot of ideas on the horizon. I’d love to think about some cantata settings, maybe even opera. There are a lot of areas to explore. Another fun area would be a diminutions project, where we all write diminutions and then tie them together, bringing the compositional responsibility of the performer back to the forefront.

Stohs: We can also keep in mind the many traditional classical practices during this time period — Turkish, Chinese — anywhere where artists were playing in acoustic spaces and using more-organic materials in their instruments.

Wood: And we’re very excited about creating compositional residencies, to workshop with students and give them a practical understanding. You can read all you want about historical performance practice, but seeing it in action is very different. Once you hear it and feel it, it’s pretty mindblowing. The idea of a residency is to start influencing the next generation of composers. They don’t have to write for traditional instruments: piano, percussion, bass clarinet. We can give them more options within a realm that they don’t know much about. This area has come up a lot in the last 5-8 years in the US. Every metropolitan area probably has a period-instrument ensemble. It’s a way that you can engage composers to start seeking these sounds out; it’s a resource that’s there, and very little composition has been done in this area. The next step is to get this idea out to younger composers. 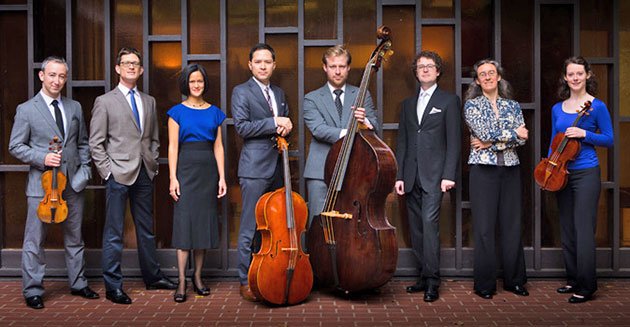 Comments Off on New Composers with Gut