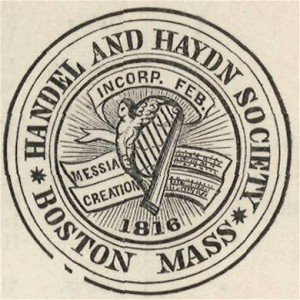 On Christmas Day 1843, Ralph Waldo Emerson wrote in his journal that he had just heard the Handel and Haydn Society perform Handel’s Messiah at the Melodeon on Washington Street in Boston. He found it profoundly moving yet oddly out of date. Audiences—and some performers and conductors—will feel the same ambivalence this holiday season, 171 years later, as we contemplate the dozens of seasonal Messiah performances in the area beginning with tonight’s by Handel & Haydn Society.

Emerson confided that despite “some delicious strains,” he understood few of the words, yet he found the concert sublimely beautiful: “[A]s the master overpowered the littleness & incapableness of the performers, & made them conductors of his electricity, so it was easy to see what efforts nature was making through so many hoarse, wooden, & imperfect persons to produce beautiful voices, fluid & soulguided men & women.” The Concord author and lecturer was transported: “I walked in the bright paths of sounds, and liked it best when the long continuance of a chorus had made the ear insensible to the music, made it as if there was none, then I was quite solitary & at ease in the melodious uproar.”

But a discordant note struck him. “This wonderful piece of music carries us back into the rich historical past[.] It is full of the Roman Church & its hierarchy & its architecture. Then further it rests on & requires so deep a faith in Christianity that it seems bereft of half & more than half its power when sung today in this unbelieving city.”

Ironically, Emerson himself was a lightning rod in debates about the city’s surging “unbelief.” An ordained Unitarian minister, he resigned his pulpit at Boston’s Second Church in 1832, shattered by the death of his young wife the previous year and struggling with doubt about administering the rite of communion. Idealistic young men and women, however, were drawn to this reluctant leader of the emerging Transcendentalist movement following publication of his little book Nature (1836), in which he announced that in nature he felt “a perfect exhilaration” revealing that “I am part or particle of God.”

But in the wake of his Divinity School Address at Harvard (1838) he became a marked man. He told graduating students who had invited him to speak that formal religion exaggerated “the person of Jesus” at the expense of his truth and that ministers betrayed the church’s very purpose by serving up lifeless preaching, which failed “to show us that God is, not was; that He speaketh, not spake.” Emerson considered Jesus a great moral teacher, one of “the true race of prophets”—but not a supernatural mediator. He intended to light a spark in the prospective preachers in his audience, to invigorate the dryasdust religion of the day. But he was attacked in the press and in pamphlets for spouting “the latest form of infidelity.”

Like most 19th-century Romantics, Emerson thought artists the new prophets in an irreligious age. And he held that all of the arts, when they are great, are “natural” and organic—that is, they capture the volatility and changeability of life itself. “[T]rue art is never fixed,” he wrote, “but always flowing.” Music, like painting, sculpture, and literature, points us away from the mere artifact and toward a great truth that is always just out of reach—toward meanings incapable of being uttered or comprehended by mere reason—and only felt. Though he lacked musical acumen, he considered the oratorio the most powerful musical form because it depends on the living “human voice when it speaks from its instant life.” And the sublime Handel (with, later, Beethoven) remained Emerson’s representative composer.

(It’s worth noting that even journalizing on Christmas Day 1843 about so monumental a work as Messiah, Emerson could turn whimsical: “Once or twice in the solos, when well sung, I could play tricks, as I like to do, with my eyes, darken the whole house & brighten & transfigure the central singer, and enjoy the enchantment.”)

The Western world’s slide into “unbelief” can hardly be charged to Emerson. Indeed, Handel’s Messiah premiered as an Easter oratorio in Dublin in April 1742, a time of rising secularism succeeded by the age of reason, science, political revolution, and industrialism. Handel, who never composed another oratorio based on the New Testament, seems to have had little interest in doctrinal hairsplitting, though his librettist, Charles Jennens, was a staunchly Church of England man.

But there is no mistaking Messiah’s vision. Harry Christophers, the music director of the Boston H+H (who has recorded Messiah with both his UK ensemble, The Sixteen, and, in 2013, the H+H), notes that “instead of telling a dramatic story, Messiah is concerned with prophecy and meditation,” culminating in “that amazing and jubilant epilogue celebrating Christ’s redemption and immortality.”

Why, then, does it endure in a more secular 21st century? Today’s audiences are even less likely to be devout than those in Emerson’s “unbelieving” day. Recent surveys indicate that as many as 80 percent of Americans claim an institutional religious affiliation but that such self-reporting is unreliable: Barely a quarter of the population—possibly under 20 percent—regularly attend any church, synagogue, or mosque.

Adapting to this demographic reality, radio spots for one regional Messiah in 2012 tip-toed around the work’s message of redemption and resurrection, and announced with denatured hyperbole: “One of the greatest stories ever told! One of the greatest musical experiences of all time! . . . [U]nforgettable and inspirational performances!”

Most Americans’ exposure to sacred music, moreover, is limited to profane TV ads—a few bars from Verdi’s Requiem or Beethoven’s Ode to Joy blasted in adrenalin-pumping previews for cartoonish action films pulsing with pyrotechnics, gore, and more noise; and a couple of bouncy “Hallelujahs” from Handel’s great chorus served up with winking cuteness to sell any number of household conveniences.

Despite Emerson’s sense that Messiah was anachronistic, it was a fixture of the Boston Christmas season by the mid-1830s. Earlier in 1843, the same year Emerson heard Messiah, his friend and fellow Transcendentalist John Sullivan Dwight published a thorough and perceptive article in United States Magazine and Democratic Review seeking to explain the oratorio’s power. A Unitarian minister turned pioneering American music critic, Dwight examined with scholarly care the architecture of Messiah, which he thought informed by Handel’s immersion in Italian opera, the art of the fugue, and the Choral. He admired Handel as “the eloquent but thoroughly true and honest people’s man,” free of the emotional excess favored by 19th-century Romanticism.

Like Emerson, however, Dwight thought analysis of musical composition finally incapable of capturing the inspirational power of Messiah. He valued Handel’s music as “a prophetic language, a language of that innate faith in every mind.” In a stunning imaginative leap, he declared that Messiah somehow transcended its scriptural and Christian sources. It was “one bright cordial, which goes straight and warm to the heart, quickening it into forgetfulness of dry dogmatics and the stumbling-blocks of tradition.” Dwight declared Messiah somehow “the story of humanity” (non-Christians will be surprised to hear today), for “the Bible history and the life of Jesus are typical of the inward history of every human soul.” “Almighty Goodness” “pervad[es] all our life,” deeply felt but transcending reason, words, creeds. “This,” Dwight concluded, “was the beginning of music . . . testifying of that unseen world within,” and no music surpasses Handel’s in expressing our “trust” in the “all-sympathizing, incomprehensible protecting All.”

Today, when scientists have identified the part of the brain that responds to the transporting power of music, Emerson and Dwight’s music theory may seem sentimental or hopelessly subjective—the product of their Transcendentalist belief in universal truths grasped by personal intuition. But no less an authority than William James famously suggested, in Varieties of Religious Experience (1902), that the power of music, like the mystical sense of oneness, is ineffable. “Music gives us ontological messages,” he wrote, “which non-musical criticism is unable to contradict, though it may laugh at our foolishness in minding them.”

Dwight asked rhetorically of Messiah’s soprano aria “I know that my Redeemer liveth”: “Who is not a believer while he gives himself up to that song?” Even great interpreters of sacred works have found in music a momentary stay against spiritual doubt. Sir Colin Davis (the BSO principal guest conductor [1972-84], who died in April 2013) conducted the London Symphony Orchestra and Chorus in the classic 1966 Philips recording of Messiah followed four decades later by a 2007 LSO Live release. Yet, in a 2011 interview, he told the UK Guardian’s Tom Service: “[W]hen I’m left alone, I can’t believe anything. . . . But for that brief hour and a half when I’m conducting [Beethoven’s Missa Solemnis], I do.” For Davis, making music was “an alternative reality,” a chance to “climb out of the prison cell of your ego and be free,” at least for the duration of the performance. In Service’s phrase, this “define[d] Davis’s faith in music as escape, consolation and spiritual experience.”

Music was a form of faith for Emerson and Dwight, as it was for Davis, and as it has been for countless others, perhaps including the woman sitting in front of me at a 2013 H+H performance of Messiah who quietly wept during the mighty bass aria “The trumpet shall sound,” probably stirred (whatever her religious beliefs) by thoughts of an ailing or departed loved one (as I will be at this winter’s concert, having lost my brother Jonathan this summer).

As the experience of music transcends words, so spiritual longings leap the fence of orthodoxy. Having lost his nineteen-year-old first wife and two beloved younger brothers to tuberculosis in the 1830s, and his five-year-old son Waldo to scarlet fever in 1842, the post-Christian Emerson abandoned belief in the trappings of religion, including a traditional heaven or afterlife. Yet he clung to a raw emotional conviction that somehow kindred spirits will reunite. Memorializing Waldo in his elegy “Threnody,” Emerson put his faith in the living spirit of nature, in “the genius of the whole / Ascendant in the private soul,” asserting: “What is excellent, / As God lives, is permanent; / Hearts are dust, hearts’ loves remain; / Heart’s love will meet thee again.” Invited to speak at the consecration of Concord’s Sleepy Hollow Cemetery in 1855, he praised the aesthetic, educational, and social benefits of such public spaces but avoided referring to a conventional idea of heaven. Yet he declared, “Here will burn for us, as the oath of God, the sublime belief,” and concluded with sublime ambiguity: “Our dissatisfaction with any other solution is the blazing evidence of immortality.”

So Emerson felt that Messiah, though a historical relic in 1843, was profoundly uplifting. 272 years after its Dublin premiere, Messiah still offers consolation and affirmation that transcends religious affiliation and doctrine. And so “unbelievers” and spiritual seekers, alongside the resolutely devout, will fill concert halls again this holiday season, to be galvanized by inspired performances by “soulguided men & women” in the latest revivals of Handel’s great oratorio.

Links to this year’s area performances can be found at the bottom of BMInt’s companion article here.