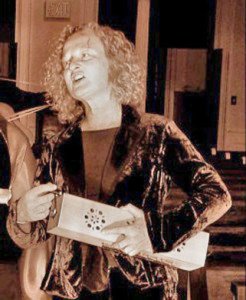 A medieval chancel drama in Boston’s august and voluminous Trinity Church? Such we will be getting when Boston Camerata together with Trinity’s children’s choir produce some compelling music and theater for the anonymous Play of Daniel from medieval Beauvais. French-born singer, medievalist, and director Anne Azéma will be both singing and stage-directing on November 21st and 23rd in the Copley Square sanctuary. As usual, she had lots to say.

Anne Azéma: Thanks for the compliment! But of course, Camerata began long before I was involved, and even before my predecessor, Joel Cohen took over from Narcissa Williamson. She started it at the MFA in 1954.

You are leading off with a new production of The Play of Daniel, at Trinity Church. There have been some recent performances of this piece by others (and some recent discussions of these in our columns here and here). So why did you zero in on this work? Are you me-tooing?

Well, hopefully, not at all! I’ve been doing, and enjoying, intense research into original medieval sources for years. But for a new production, the whole idea is to see this wonderful musical play from the Middle Ages in a new light. We want it to be beautiful and spiritually uplifting, of course, but we also want it to be somehow new and challenging. The key is to break out of complacency.

I know- but ecclesiastical music also sometimes terrifies us but rarely gives us any fun.

Ah, but there’s the rub. The Play of Daniel was intended for the raucous New Year’s season, for youthful performers, and for a climate of topsy-turvy inversion of power. We in modern times still have those elements in our own year-end celebrations, and they are very strong in the Daniel play, alongside very serious religious and philosophical themes. The idea is to help all the dimensions of this complex work speak to a modern audience. “Daniel” is serious fun, with the emphasis on both words.

We decided to take on a greater challenge, by consciously not trying to recreate a medieval picture book. In the Boston Camerata’s previous, path breaking production of 1983, Joel Cohen and Andrea von Ramm already had broken away from the medievalist approach. As for us today, some of the current performance will take place using modern church vestments. Other parts of it will look pretty different.

What percentage of that famous 1958 New York Pro Musica production shows up in your musical score?

Zero percent. I spent a large piece of the summer transcribing all the music afresh from a big facsimile of the original, 13th-century manuscript. Concerning the numerous live performance choices to be made, I have also allowed myself to be influenced here and there by topnotch musicians whom I admire: string player Shira Kammen and Arabic percussionist Karim Nagi, team members of this production. Some of Joel Cohen’s ideas about Daniel have had an influence, of course. We also have engaged a marvelous dancer, Indrany Datta-Barua, who, along with Karim, will inspire the choreography and movement.

Why such exoticism? I thought this music was French…

Of course it is. But remember, the setting for the tale is ancient Babylon. That’s a place we know today as Iraq. And the big political upheaval that takes place right in the middle of the play is an invasion by the king of Persia; that’s Iran, folks. Did I mention that the hero is a Jew in exile? As I said, it’s a complex work of art. All of these dimensions, up to and including H. H. Richardson’s fantastic architecture for Trinity Church, are going to have a role in the current production, not as folklore or anecdote, but as contributions towards a new vision. And to make the mix even richer, we’ve confided the lighting and media elements to Peter Torpey, a young genius recently with the M.I.T. Media Lab.

Anne, you certainly are not bound by a narrow vision of how this piece should be experienced. Are you worried that some will think you’ve gone too far with production details that would be unrecognizable by the people of medieval Beauvais

Hopefully, less worried than Daniel in the lion’s den (laughter). As to whether the good citizens of Beauvais would have gotten the point of this production: we certainly hope so! After weeks of preparatory immersion in thirteenth century music, theology, and poetry, we feel reasonably confident that we’ve received the ancient message, loud and clear. Our job is not to get bogged down in pictorialism and anecdote, but to transmit, employing the creative imagination of our own day, the essential beauty and truth of this medieval masterpiece.

But any anxiety is mitigated by knowing how willing our audiences are to take a journey with us, especially in the company of this wonderful cast: Jordan Pitts, an astonishing young performer, making his Camerata début as Daniel, along with Jason McStoots and Joel Frederiksen as the rival kings, and a slew of others among Boston’s best. We also include students from the Longy School of Music, and two outstanding children’s’ choirs: The Trinity Choristers, and the Boston City Singers. As happens so often in Camerata concerts, the audience will be asked to sing along with us in places. We want to make this not only a Camerata celebation, but also a community celebration.

The Play of Daniel

Comments Off on The Play of Daniel Revisited