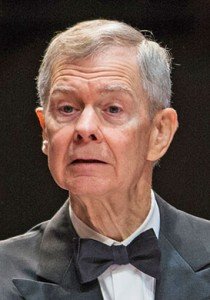 On October 25th, the New England Philharmonic, under the direction of Richard Pittman, will commence its 38th season and continue the tradition of presenting Boston and world premieres from contemporary composers alongside orchestral masterworks. The 8:00 concert at theTsai Performance Center features György Ligeti’s Ramifications, Bernard Hoffer’s Ligeti Split (world premiere), Igor Stravinsky’s Capriccio for Piano and Orchestra with Randall Hodgkinson, piano, David Rakowski’s Dance Episodes Symphony No. 5 (world premiere, NEP commission) and concludes with Maurice Ravel’s La Valse. But this isn’t all Pittman will be conducting this weekend. He will also be presiding over two concerts of the Concord Orchestra on Friday and Saturday at 51 Walden featuring the rarely-performed Bruckner Second Symphony, and Randall Hodgkinson will be playing Mozart’s 23rd Piano Concerto in A major, K. 488. BMInt had a recent conversation with Pittman.

Mark DeVoto: I’m particularly interested in the new works which you’re going to perform next week. Would you like to tell us about those?

Richard Pittman: You probably know that David Rakowski is the composer in residence with the New England Philharmonic. He’s been with us for several years, and we do a new work by him every year. Normally I leave it entirely up to him about what he wants to write, unless I have some special programming idea that could be helpful. For last year’s season I was expecting a piece about ten or twelve minutes long, but he told me, “It turned into a symphony—I had such fun that I just kept on writing.”

But the last season’s programs were already set, so we could only play the first movement. That was typical of him—he’s a very good composer, a highly intelligent and serious person—but he has this wild sense of humor. So, in the end, the Dance Episode turned into Symphony no. 5. It’s in four movements, each one quite different. The first, which we played last year, is called “Zephyrs,” and it really is zephyr-like. The second is “Masque.” The third movement is very slow and lyrical, with a large part for solo violin and also occasionally a solo second violin, viola and cello with it; the last movement has a virtuosic part for the solo pianist that becomes a bit jazzy. Except in the slow movement, there’s a lot of use of repeated notes; harmonies and sonorities are continually shifting; and there’s much contrapuntal interplay – it’s quite a fascinating work, and kind of subversive, the way David himself is. There’s a lot more to the symphony than what initially seems to be there as you’re going through it, and then it starts to dawn on you, while all this other stuff is going on.

The rest of the program is built around the other world premiere, by Bernard Hoffer. He and I are both old Army buddies; we were both in the U.S Army Field Band in Washington, DC. He was an Eastman graduate, and the band’s staff arranger. When he left the Army he went to New York and worked as a jazz pianist and arranger; he backed up a lot of really well-known jazz singers in clubs in New York, and even made a CD of songs with Fred Astaire. Fred Astaire, by the way, is my candidate for “the most musical human being” – such a wonderful singer and actor as well as a dancer. Anyway, Bernie got into the jingle business; wrote the theme music for McNeil-Lehrer News Hour, for American Experience, and for the ThunderCats cartoons. But he was also writing serious music at the same time: a violin concerto for Danielle Maddon, our concertmaster; a symphony based on the paintings of Richard Pousette-Dart, the New York abstract painter; an English horn concerto for Thomas Stacy, a viola concerto for Emanuel Vardi, a piano concerto for Randy Hodgkinson and the Concord Orchestra. He’s always had one foot in the jazz world. He has also written some terrific pieces for Boston Musica Viva. This new piece is called Ligeti-Split as a tribute to György Ligeti, who has always been one of Bernie’s favorite composers. The piece starts out very much with chords and sonorities that gradually transform into jazz in a kind of sneaky way. It has a funny, simple ending. Along with this on the program, we have a work by Ligeti, Ramifications for twelve solo strings, so that one can see Bernie’s point of departure. And Randy Hodgkinson is playing the Stravinsky Capriccio. Do you know that piece?

I first heard it as far back as 1957 at the Boston Arts Festival, when Robert Craft conducted it on Boston Common, with Soulima Stravinsky as the soloist.

Soulima played the Capriccio very often with his father conducting. I knew it from playing in various orchestras and for the New York City Ballet – Balanchine did a wonderful ballet version of it. So that is the dance connection, and it’s a terrific concerto, among Stravinsky’s great works. And then of course there’s also a lot of humor in it.

I did see Stravinsky a number of times. He conducted the National Symphony in Washington a lot when I played in it, and I prepared the Eastman Philharmonia for Stravinsky’s visit when I was on the Eastman School faculty. I was instructor of conducting and music director of the opera department then, and the junior orchestra conductor. He really had a wicked sense of humor, and he had a very deft way of putting people in their place who needed to be put in their place, so perfectly that there was no possible retort. That would have been around 1966, I think. At Eastman, Craft conducted the rest of the program and Stravinsky conducted the complete Firebird. I did all the preliminary rehearsals. That was the best conducting I ever saw him do, because he was frail by the time, he could only do the minimal gestures, so that made it that much clearer – and of course he was always so very musical. He was still very much with it, and physically okay. We had one encounter, he and I, all by ourselves – he was let out by the side door at the Eastman School, so he wouldn’t have to go up a lot of stairs. I remember he was wearing his Homburg hat, and that black coat with a velvet collar. We exchanged broad smiles.

About Ravel’s La valse, which concludes your program, I wanted to ask you if you agree that there are some serious orchestral problems with parts of it, where you just can’t really hear what’s going on, and that’s not what you would expect from “the Swiss watchmaker” himself.

Well, I agree, because it’s a very complex score, and you really have to work at getting the balance right. As is also the case with Richard Strauss. But I believe that when everyone precisely observes his dynamic markings, La valse can work, but it really is a challenge. And the other reason why it’s such a challenge is that it’s so very busy, so many things going on at once. It’s so episodic in terms of the way it’s orchestrated – like the melody will have four bars, say, in the violas or cellos and the next four in the bassoons or the clarinets, and the next four may be back again, passing around. And there are all these running eighth-notes which you’d never find in a Strauss texture. At any rate, I agree with you, but I think it’s doable, and when you hear those old recordings of Strauss’s works conducted by Strauss himself or by Clemens Krauss. (My old conducting teacher in New York, Laszlo Halasz, was also very good with Strauss—Halasz had been his assistant.) When they conducted those pieces they sounded transparent. What it boils down to is that they got the orchestra to be very precise about the dynamics. Usually you think of Strauss as being very thick and heavy, but it’s not, if the dynamics are precise. As for La valse, there’s a very feverish aspect to it, with all those different things happening.

Ravel is supposed to have said, “La mer is poorly orchestrated. If I had time, I would re-orchestrate La mer.” I’m sure that there are some orchestral problems in La mer, but there’s no doubt that Debussy was a great orchestrator. And Stravinsky actually did write that he would always be revising his music if he weren’t already so busy composing more of it.

Well—but with La mer you’re talking about a masterpiece. And about Stravinsky, that’s very interesting, because we have so many revisions of all those early works, and I’ve conducted an awful lot of Stravinsky, both the original versions and the revised versions, and it’s a fascinating process, so my take on it is that in the revisions, he almost never changed a note of the music, but he notated things in a much more logical and practical way – he learned from the experience.

That’s right. And also the way meters were marked, and tempo transitions, in a much more logical, common-sense, clear way – I think he really improved things. But you know, Boulez is another person I studied with, and there’s a lot to be said for the larger orchestras that Stravinsky used in the original versions of the ballets. When you get more things that are in choirs of one family of instruments, and rather than having to distribute between, say, bassoons and clarinets, or when you need to add another instrument to get all the notes of the chord in—well, I think that was one reason for Boulez’s preference for the original versions. He felt the same way about Schoenberg’s Five Pieces for orchestra.

Yes, the original 1909 version of the Schoenberg that was published in 1912 I think—it’s now available in reprint score published by Dover. We ought to sit down sometime with scores in hand and go over a number of these issues with the different versions. But meanwhile, I’m grateful for your giving us your time for this discussion, and you’ll have other concerts with New England Philharmonic coming up later in the season, so I hope we will do this again. I very much look forward to your concert on October 25th.

Well, these two world premieres are certainly worth the price of admission, I think.