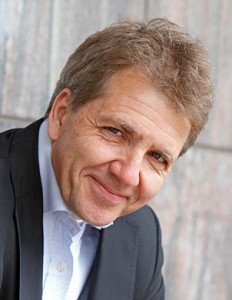 In a program originally planned for Rafael Frühbeck, Swiss conductor  Thierry Fischer makes his Boston Symphony Orchestra debut in a program that pairs Brahms’s Piano Concerto No. 1 with Nielsen’s Symphony No. 4, The Inextinguishable. Austrian pianist Rudolf Buchbinder, a noted interpreter of the Austro-German canon, is the featured soloist in the Brahms concerto. Performances take place at Symphony Hall on October 16, 17, 18, and 21 at 8:00 p.m. BMInt had an interesting email interview with Mr. Fischer this weekend.

You recently extended your contract as music director of the Utah Symphony. In earlier eras, from Abravanel through our own Joseph Silverstein, that orchestra featured unusual repertoire and an ambitious recording program. What’s your vision?

I decided to get back to basics by playing more classical music. Since 2009, when I became music director, we’ve performed complete symphony cycles by Beethoven and Mendelssohn, and last season a cycle of Carl Nielsen’s  symphonies complete symphonies, which, except for the first symphony, were composed in the 20th-century. This season we began a two-year Mahler symphony cycle. In 2010, we started, symbolically, to perform the complete Haydn symphonies, playing them in order, one per season. This is symbolic in that it is a return to our pure classical roots. We will have performed the first nine symphonies by 2019. But I’ve also reintroduced music from the Second Viennese School, with works by Schoenberg, Berg and Webern. And I feel a responsibility to play music like Dvorak’s New World Symphony, Holst’s The Planets, and Respighi’s The Pines of Rome, and have programmed French repertoire that is special to me, music by Berlioz and Debussy. I have also commissioned five new pieces, by composers such as Nico Muhly, Andrew Norman, and Augusta Reade Thomas, the Swiss composer Michael Jarrell and the British composer Simon Holt. Basically I like to program a very diverse repertoire, and extremes, from early classics to new commissions, and from the most-unknown to the most-known.

Ultimately my goal is to have everyone find what they are looking for, or be happily surprised by some unknown piece or composer. I want going to the symphony to be a fun, entertaining and surprising experience. I want the audience to be drawn to our music and I want them to feel like they have to go—that our concerts are not to be missed. I love it when the public comes with curious questions, without any preconceptions about what a symphony should be or sound like. As an organization we aim for artistic excellence—this is our target, while we raise the bar every season.

As for recordings, we have just recorded the first since I arrived in Utah—Mahler’s Symphony 1, which will be released by Reference Recordings in the spring. Other longterm projects are coming and will be announced in the future.

You bio refers to your hiring “30 young, energetic musicians” in Utah. Can you elaborate?

I am fortunate to have had the opportunity to hire a number of great musicians for the Utah Symphony, and that came from a natural progression of orchestra members leaving. We have had about 30 musicians join us in recent years, but our orchestra is a synergy of up to 90 players—all of whom have the same energy. The Utah Symphony is an ensemble of eager, enthusiastic and positive musicians who all have the same input and energy and work together on the same level.

With your full-time commitment in Utah, will you have much time free for guest conducting, and what other orchestras do you have ongoing relationships with?

Well, that changes every with every season. I typically spend two months a year in Geneva and the other 10 months between America and touring Europe and Asia. I maintain great relationships with my former orchestras, including the BBC National Orchestra of Wales—I conducted them at the Proms earlier this year—and the Nagoya Philharmonic in Japan, where I am honorary guest conductor. I currently have only one directorship, with the Utah Symphony, but that also affords me the time to conduct orchestras like the Detroit and Atlanta symphonies, Rotterdam Philharmonic, Salzburg Mozarteum Orchestra, Swedish Chamber Orchestra, Suisse Romande Orchestra, and Oslo Philharmonic, all orchestras I have conducted recently or will conduct in the upcoming season.

When BSO management asked you to conduct Brahms Piano Concerto No. 1 with Rudolf Buchbinder and Nielsen’s Symphony No. 4, was it because you happened to be available, or because you have history with either or both of these works?

I suppose it was both. I can only guess what details brought us together, though I am very familiar with the music on the program. I’m incredibly happy to be here in Boston and can’t wait to perform the Nielsen, having just finished his cycle with the Utah Symphony. I feel such a deep honor to be playing with the BSO, though what led me here—the untimely passing of Rafael Frühbeck—is sad.

As guest conductor of a familiar work such as the Brahms, do you expect to leave an imprint, or will you be more likely to defer to Buchbinder?

My hope is that all performances leave an imprint. That we musicians inspire each other and together we leave a lasting impression on the audience. I’m looking forward to working with Buchbinder and I’m honored to play with him. In the Brahms concerto, which is very much like a symphony, I believe we will come together and collaborate in a very active and natural manner, but there are times when I like to listen to the musicians’ needs, musically speaking, and in a way accompany them, especially with musicians like Buchbinder and the BSO.

What can you tell us about what to expect from your performance of the Nielsen?

I expect, or rather want, the audience and orchestra to feel and experience Nielsen’s ideas and feelings about life. Nielsen thought the world was falling apart, especially when he wrote his Fourth Symphony, during World War I. He titled it the Inextinguishable, a single word that he used to try and show what only music can fully express: an elementary will to live.

Nielsen is the kind of composer who says that life evolves over time, but music remains invincible. “Music is life.” Nielsen said this all the time. He believed that where other arts, like literature and the visual, only described life, music is life. Life is indomitable. His Symphony No. 4 is not an explosion of anger, but more a creative product. The work symbolizes the indestructability of life, despite all the attacks. Life goes on, whatever happens. I’ve always admired Nielsen. He means a lot to me because of his simple values. Things have to be more simple, but not simplistic. For Nielsen everything is essential, and that has always inspired me. His music is a shout for life.

You have a lot to say on YouTube about chemistry with an orchestra. Is it organic or inorganic?

Philosophically speaking, chemistry is both inorganic and organic. In an orchestra, everyone has different responsibilities, yet we also have a symbiotic relationship and need one another. The musicians are asked to rethink their ideas or conform to the conductor’s interpretation but, vice-versa, the conductor must also play to the musicians’ strengths. As a conductor, my aim is to open doors to make concepts possible in a world of preconceived ideas. I am looking for simplicity, joy and excellence in the performance, and my responsibility is to make room for the orchestra to achieve these simple goals. There is no recipe for chemistry, but only strength in a solid vision and communication.

If BSO management had said come conduct anything you like, how would you have introduced yourself to the players and listeners?

Even with the choice, I probably would have played this exact program, though I would have loved to add a piece by a Swiss composer, such as Honegger’s Pacific 231, which is a short but powerful piece that says “I’m here.” Yet I couldn’t be happier than to conduct Nielsen with the BSO. He’s a composer to whose concepts and ideas I can relate—that music brings us infinity.

Thierry Fischer has been the Music Director of the Utah Symphony since 2009. Since then, the Utah Symphony has been on a steady upward trajectory, attracting younger audiences with fresh repertoire (Mr. Fischer commissions a new work every year) and 30 new musicians, many of them principals. Each season, he has programmed full symphony cycles, including Beethoven’s nine symphonies in the 2011-12 season, Mendelssohn’s five symphonies in the 2012-13 season, and Carl Nielsen’s six symphonies in the 2013-14 season. He has also programmed a multi-season exploration of works by Stravinsky. In the summer of 2014, Mr. Fischer led the Utah Symphony on a tour of Utah’s Mighty 5®, performing free outdoor concerts in Arches, Bryce, Canyonlands, Capitol Reef, and Zion National Parks.

This season, Mr. Fischer begins a two-season Mahler symphony cycle, performing the first four symphonies in the 2014-15 season and the last five in the 2015-16 season. Mahler’s Symphony No. 1, Titan, launched the Utah Symphony’s season, as well as the cycle celebration. The performances were recorded live and will be released on Reference Recordings as part of the Utah Symphony’s 75th anniversary celebrations. This marks Mr. Fischer’s first recording with the Symphony, as well as the Symphony’s first recording in Abravanel Hall.

Thierry Fischer recently extended his contract as Music Director of the Utah Symphony through the 2018-19 season. He has attracted leading young musicians to join the orchestra and top soloists to come to Utah, has refreshed the programming, drawn consistently full houses, and galvanized community support. Mr. Fischer began his performing career as Principal Flute at the Hamburg Philharmonic Orchestra and the Zurich Opera. His conducting career began in his 30s when he replaced an ailing colleague, subsequently directing his first few concerts with the Chamber Orchestra of Europe, where he had been Principal Flute under Claudio Abbado. He was Principal Conductor of the BBC National Orchestra of Wales from 2006 to 2012 and returned with them to the BBC Proms in 2014. As guest conductor, he has led the Philharmonia, Czech Philharmonic, Oslo Philharmonic, Orchestre National de Lyon, Frankfurt Radio Symphony, Seoul Philharmonic, Cincinnati Symphony, Grant Park Orchestra Chicago, Orchestra of the Age of Enlightenment, London Sinfonietta, Scottish Chamber, and Swedish Chamber. This season, his guest conducting engagements include Oslo Philharmonic, Rotterdam Philharmonic, Residentie Orkest (The Hague), BBC Symphony, Salzburg Mozarteumorchester, Madrid RTVE, Aspen Music Festival, Detroit Symphony, Atlanta Symphony.