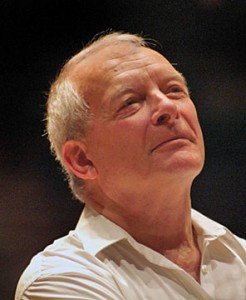 Following an illness lasting several months, Christopher Hogwood died peacefully on Wednesday today, a fortnight after his 73rd birthday. He was at home in Cambridge, UK, with family. The BBC tells us in a fine tribute [here] that Hogwood worked with many leading orchestras around the world and was considered one of the most influential exponents of the early-music movement. He famously founded the Academy of Ancient Music (AAM) in 1973, directing it across six continents for some 30 years. The AAM also made more than 200 CDs, including the first-ever complete cycle of Mozart symphonies on period instruments.

“We are simply heartbroken by this news,” said Handel and Haydn Society Executive Director and CEO Marie-Hélène Bernard. “Chris left a permanent footprint on this organization. We were very much anticipating his return in March to lead the Mendelssohn Elijah during the H+H Bicentennial. It’s a milestone that I know meant a great deal to him.”

“Chris Hogwood was a wonderful colleague, and many of us will miss his earthly presence,” Hogwood’s former concertmaster Dan Stepner told BMInt.

According to H + H publicist Matthew Erikson, “The Handel and Haydn Society’s conductor laureate, Christopher Hogwood, the ensemble’s artistic director from 1986 to 2001, profoundly changed the direction and vision of this venerable institution, and added tremendously to its renown and international profile.”

By completing its evolution in 1989 into an exclusively period-instrument orchestra and chorus, Hogwood ushered in a new and exciting chapter in the history of this 200-year-old organization. His 15-year tenure abounds with great artistic successes, from a splendid collaboration with the Mark Morris Dance Group in a production of Gluck’s Orfeo ed Euridice, which toured to the Edinburgh Festival and elsewhere, to unique jazz partnerships with the Dave Brubeck Ensemble, Chick Corea, and the Marian McPartland Trio, among others.

Born in Nottingham, England on September 10, 1941, Christopher Jarvis Haley Hogwood studied music and classical literature at Pembroke College, Cambridge. His early music influences included conductor and harpsichordist Raymond Leppard and musicologist and harpsichordist Thurston Dart. Dart inspired David Munrow and Hogwood who became the founders of the Early Music Consort of London in 1967. Hogwood then revived the Academy of Ancient Music, a group originally begun in 1726, to study the “old” music of its day. Under Hogwood’s direction, the “new” Academy of Ancient Music performed and recorded on period instruments. He was first approached by the Handel and Haydn Society in 1985 and became its Artistic Director in 1986.

Hogwood began his tenure with a powerful first impression: a Mozart weekend, centered on the Requiem, followed by H+H’s first period-instrument Messiah and a spring full of Bach, Handel, Mozart, Purcell, and Haydn. During his tenure, Boston also heard Handel operas (Giulio Cesare, Semele, Acis and Galatea, and, later, Ariodante) and in 1999, the world premiere of Dan Welcher’s JFK: The Voice of Peace, narrated by David McCullough, which had been commissioned by H+H.

“It was thrilling to work with Chris,” says veteran H+H principal flutist Christopher Krueger. “He brought so many new ideas and so much energy to the projects that one couldn’t help but feel swept up in a new wave of music-making. Chris was a great leader, but he was always extremely human, always a colleague; he never put himself above any of the musicians he worked with; he seemed to be delighted by all of us,” continues Krueger. “He was a good friend.”

After leaving the Handel and Haydn Society in 2001, Hogwood became Emeritus Director of the Academy of Ancient Music, the orchestra he founded in 1973, during the 2007–2008 Season. In addition to his close association with the Kammerorchester Basel, Hogwood was also a regular guest with the Tonhalle Zurich, Frankfurt Radio Symphony Orchestra, and Athens Camerata. A prolific musician, he made over 250 recordings, including the first-ever complete Mozart symphonies on period instruments.

“Although he made his reputation recording Mozart, Chris was perhaps most passionate about Mendelssohn,” says Mary Deissler, H+H CEO at the time of Hogwood’s tenure. “He felt Mendelssohn could give Mozart and even Beethoven a good run for the money. In 2000 he led the monumental Elijah for the 100th anniversary of Symphony Hall, and it was one of his proudest moments with us.”

A writer and musicologist, Hogwood also edited the music of Mendelssohn and C.P.E. Bach. He was the chair of the editorial board of C.P.E. Bach: The Complete Works, which is published by the Packard Humanities Institute. Hogwood’s personal volumes include Handel: Water Music and Music for the Royal Fireworks (Cambridge University Press), published in 2005.

From Harry Christophers, H+H Artistic Director: “As founder and conductor of the Academy of Ancient Music, Chris set the world alight and was very much at the forefront of the period music movement. His inspirational appointment as Artistic Director of H+H in 1986 broke new boundaries. By turning the orchestra into a period orchestra, he laid the foundations for excellence in scholarship and stylish playing. He redefined our mission—to make the old sound new. We will miss him greatly.”

Dan Stepner continues, “We continued to be connected through email, and even more so through his scholarly pursuits and publications in recent years. During his tenure at the helm of the Handel and Haydn Society he proved courageously adventuresome with repertoire in a way that stimulated us in the orchestra and chorus, as well as the audience. Always interested in the byways of baroque and classic era music, he also led memorable performances of better-known masterpieces. I remember particularly a moving B Minor Mass of Bach’s that he led, as well as Bach’s lesser-known Lutheran Masses. Among my cherished memories, are Chris’s rendering of Beethoven C Major Mass, Cherubini’s Medea (narrated by Claire Bloom), and Mendelssohn’s overture from The Uncle from Boston — not to mention three of Mendelssohn’s masterworks: Elijah, the original version of his Italian Symphony, as well as Mendelssohn’s epoch-making version of Bach’s Saint Matthew Passion.

Chris’s splendid Vivaldi Weekend marathon put the composer into new relief for me, and the Mozart Weekend, with the multiple completions of the unfinished Lachrimosa and other rarely heard fragments, was a revelation. Chris had a special affinity for Mozart; it was wonderful to play Mozart’s concerti with him, both as soloist and orchestral player. His collaborations with Dave Brubeck and others jazz greats were natural outcomes of his interest in improvisation and communication across the centuries.

As a conductor, Chris was energetic, helpful, unostentatious and gracious. He was always collegial in that role, but firmly in command. His performing was always about the music.

With a recent publication, Chris left us violinists an invaluable compilation of Corelli ornamentation by numerous 18th-century violinists. For  music-lovers he left  a wonderfully balanced biography of Handel. His commentary and writing in general had a modern perspective, even as it was grounded in thorough scholarship.

Personally, I will always be grateful he asked me to serve as concertmaster for H & H when he arrived in Boston. I consistently enjoyed both his rehearsals and concerts. Among the recordings we made together that I am particularly proud to be a part of are his Handel Concerti Grossi, the Haydn vocal works with Arleen Auger, and his Handel oratorios in the Mozart orchestrations.”

H+H will dedicate the performances of Mendelssohn’s Elijah, to be conducted by former Music Director Grant Llewelyn on March 6th and 8th, 2015 at Symphony Hall, to Christopher Hogwood.