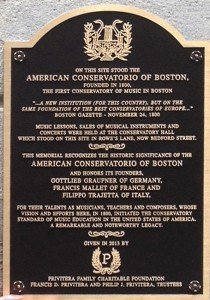 On last Wednesday evening, 15 years of research to shed light on a long-overlooked page of Boston’s rich history culminated with a gala reception and performances by the Rowe’s Lane Quartet of compositions of F. J. Haydn, Filippo Trajetta and George Onslow. The Commemorative Ceremony honoring the American Conservatorio of Boston, founded in 1800 by three immigrant musicians, Francis Mallet, Gottlieb Graupner and Filippo Trajetta, was celebrated courtesy of the Hyatt Regency Boston Hotel. A memorial plaque in recognition of this historic “first” conservatory of music in Boston and in the United States is installed on the Bedford Street facade of the Church Green Building, where Summer Street and Bedford Street converge.

As a second-generation Bostonian, I had always believed that New England Conservatory and Boston Conservatory were the “first” conservatories of music in Boston and in the United States (due to their founding date in 1867), but my belief of such “firsts” was being challenged in 1999 by what I read in a then-recently published book “The Italian Americans of Greater Boston,” Arcadia Publishing, Copyright 1999 by William P. Marchione, Ph.D. Chapter One, The Lure of Italy, has the following information: “Filippo Trajetta, a Venetian conductor and composer…established the first American conservatory of music in Boston.”

This simple statement of “fact” compelled me to embark on a research journey to “learn more.” It became a unique mission of mine to shed more light on a long-overlooked page of Boston’s rich history. This effort carries the title Civic Pride and Musicology Plaudit and it greatly pleases me to recognize and honor the founders of the American Conservatorio of Boston.

For more on the subject please look to my BMInt articles here, here and here. These articles were edited by Bettina A. Norton, who also gave the keynote address at the gala.

Teresa F. Mazzulli is a second-generation Bostonian who in retirement discovered a passion for researching “overlooked” pages in Boston’s rich history, an interest she developed as a Doric Docent guide at the Massachusetts State House.