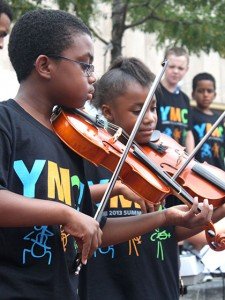 More than 80 students are participating altogether. They play the full range of orchestral instruments, range in age from 7 to 12, and come from El Sistema-inspired music programs in Chiapas, Mexico and the greater Boston area.

The culmination will come in two concerts, both free and open to the general public, featuring all the Summer Academy students performing works by Brahms, Rossini and Merle Isaac alongside members of the Longy Conservatory Orchestra and Summer Academy faculty Marielisa and Mariesther Alvarez, Jorge Montilla, Courtney Getzin, Taide Prieto and David Hurtado, all under the direction of Jorge Soto. The first concert will be performed in Harvard Square at 3 p.m. on August 21st. The second will be at 4 p.m. on August 22nd at Longy’s Edward M. Pickman Concert Hall.

BMInt: This summer’s program at Longy sounds like something of a music camp. Does it go beyond that?

JORGE MONTILLA, Faculty of Longy and a product of the El Sistema system:

Yes, it does goes beyond that. While the two-week program is structured as a summer music camp, it is part of a much larger, year-long series of “seminarios” (or El Sistema gatherings) that take place at Longy through the year and are offered to students at little or no cost. Many of the same nucleo students and conservatory students participate during the summer and throughout the year, deepening the learning experience for Longy conservatory students and strengthening the sense of musical community for the participating nucleo students.

I remain confused about whether there is any central institution representing El Sistema in Boston other than the national El Sistema USA, and also I wonder how the apparently 10 independent programs in the Boston area dispense and partake of the various offerings. Does Longy wish to be seen to be a leader or as a central institution?

El Sistema is a grass roots movement that addresses social issues and access to music education—so this does not lend itself to any one organization acting as a central representative.

Longy is able to play a leadership role in the El Sistema community in two ways:

Second, we convene nucleos at Longy through the Side by Side program, which includes the summer academy. Not only does this deepen the mentoring experience for our conservatory students, but it also provides musical opportunities in a college or university setting to the nucleo students.

Kalen: Yes. El Sistema programs for children are focused on social and musical experiences and the development of the participants. Longy’s El Sistema program—which develops mentors and teaching artists—includes this focus on the social and musical development by inviting nucleo students from a range of El Sistema programs, but it also adds a layer of support for the participating Longy conservatory students so they can reflect on their teaching and mentoring experiences and discuss strategies to strengthen their skills in this area.

Jorge: Longy is playing a major role in developing mentors and teaching artists for the field of El Sistema. In addition to the valuable experience they offer to Longy conservatory students, they have developed a Master of Arts in Teaching program in Los Angeles, where they are training high-level musicians in the unique mentoring and teaching approach of El Sistema and certifying them to teach in public schools and community music programs. As more and more graduates of this program enter the field, they will have a long-lasting and profound impact on the field of El Sistema.

And the field is quite large. One can click here for a US map showing more than 100 participating institutions. In the Boston area alone there are:

Comments Off on Music Academy Within and Without Walls