Boston GuitarFest IX continued its “American Odyssey,” Saturday evening at Jordan Hall with a first-ever collaboration with the Boston Modern Orchestra Project in an unusual program of three guitar concertos. Joaquín Rodrigo’s masterwork preceded two commissions from the series Artistic Director Eliot Fisk, both compositions new to Boston audiences. Featured soloists were Zaira Meneses in the Rodrigo and Fisk, himself, after quite a week of overseeing the audacious week-long event, taking on the pair of commissions.

Concierto de Aranjeuez of Rodrigo met with burnish yet begged for warmth. Together Meneses and BMOP, under Conductor and Artistic Director Gil Rose, created a canvas at once tightly framed and finely drawn. As to painting the Rodrigo, Meneses took to line, drawing the horizontal, the melodic and the figurative, carefully, straightforwardly. For the vertical, the harmonic, she recognized equality even at dramatic moments such as in swift, forte strumming.

Her technical virtuosity was everywhere in evidence, often coming with a seat-of the pants will she make it! It is not at all an easy concerto for the guitar, I am told. Surely, this made for some excitement.

Rose and orchestra naturally provided color, distinct hues from the subdued to the sparkling, cooler, even icier shades invariably prevailing. Unfortunately, despite two small speakers flanking Meneses, the amplification was not enough. Throughout most of the concerto, the orchestra was the real presence.

The biggest disappointment of all had to be the Adagio, which was taken at a tempo that became reflective but too slow for evincing affectionateness. On the other hand, the last movement was as perky as could be, its variations finding in both Meneses and Rose a not-too-much-made-over interpretation that allowed inner complexities to turn into simplicities and truly dance.

Boston GuitarFest stepped out once again, this time offering a world premiere, Pop Concerto for Guitar and Orchestra by Anthony Paul De Ritis, Composition Competition Director of the “Fest” and Chair of Northeastern University’s Department of Music. In response to Eliot Fisk’s seeking a “new work with cross-over appeal,” DeRitis based his four-movement work on the music of Seal, Alanis Morrisette, U2, and Michael Jackson. DeRitis also informs us of his “long wanting to reference how popular music production techniques (such as panning, filtering, electronic sound, reverb, digital delay) might find [their] way into my orchestrations.”

Immediately, certain questions will arise. What age group is familiar with the pop songs written that the composer has chosen from between 1987 and 2000? Who is able fairly to evaluate the production techniques DeRitis suffuses into his work? 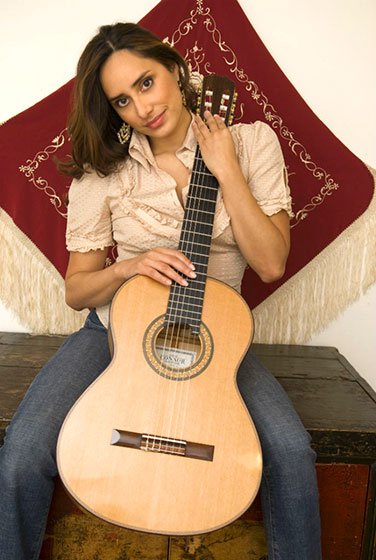 Being no expert in either realm, I can only go on limited experience. Yes, I have heard “Bring It On,” You Oughta Know,” “Beautiful Day,” and “The Way You Make Me Feel,” so I have not been living completely under a rock. Did I listen often enough to be able to spot these songs as I would the Dies Irae in Symphonie Fantastique or “Simple Gifts” in Appalachian Spring? No.

Sadly, the concerto failed to titillate. Its “reconceptualizations” netted little variation, with the guitar playing back-up to the orchestra’s yawning repetitions, the drumset restrained. “In between each movement is a brief solo cadenza showing off Eliot Fisk’s virtuosity, and also providing rhythmic contrast to the beat-driven popular works.” There was also a cadenza before the close of the Jackson movement. These show-off zones were the highpoint of the Pop Concerto as they displayed the wealth of technical brilliance Fisk has at his fingertips. Interestingly, onstage after the performance, DeRitis did not want to take full credit for having written the cadenzas himself, insisting that Fisk contributed greatly to their writing.

The Boston premiere of Guitar Concerto by Robert Beaser, Yale classmate of Fisk and Chair of the Composition Department at Julliard, embraced a larger world, including earlier styles of Baroque and Ravel along with those of Andalucia and Kentucky. His is a swift, often intensely moving and demanding continuum, keeping Fisk, Rose, BMOP, and the rest of those in attendance, on our toes. The endings to the first two movements and the deceptive ending to the driving closing movement were spectacular, as shocking as surprising as inevitable. At times, though fleetingly, Fisk and Beaser waxed beautifully, touchingly.