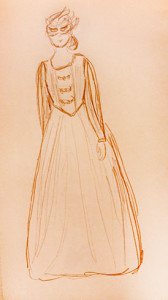 This year, high summer in Boston looks to be equal parts spooky and fun, featuring Viennese bats and Victorian vampires. The fun part comes from the North End Music and Performing Arts Center who, on June 27th-28th, will be presenting their third annual summer Opera Project at Faneuil Hall, featuring a production of Johann Strauss’s Die Fledermaus, fully staged and sung in English. The spooky part comes from Opera Hub, who will be producing a new adaptation of Heinrich Marschner’s Der Vampyr (1828) running June 19th– June 27th at the Plaza Theater in the Boston Center for the Arts.

The NEMPAC Opera Project was founded in the spring of 2012 by two NEMPAC instructors, staff members, and trained Opera Singers, Sherri Snow and Rebecca Rapoport-Cole. In their inaugural year they presented Bizet’s Carmen and last year Mozart’s Cosi fan tutti. Recently I had the opportunity to ask them about the production. Apparently, NEMPAC takes its comedy seriously, as Director Adrienne Boris puts it:

Fledermaus is known as a funny, even “fluffy” comic opera, but I think the opera deserves attention because of a universal human truth hidden amongst the laughs: as humans, we are prone to “grass is always greener” syndrome. So often, we don’t want to be where we are, with whom we are, or even who we are, no matter how hard we may have worked to get there. The characters in Strauss’s opera experience this to the extreme. The opportunity to escape their own identities and circumstances has an almost addictive hold over them and drives the opera’s plot forward at breakneck pace, making them to desperate, crazy, brave, and sometimes cruel things. The opera is satire at its best; it is funny because, whether we like to admit it or not, we can relate to it.

The production of Die Fledermaus will be set in Jahrhundertwende Vienna, but, as Boris states:

The world of our production is rich and purposefully anachronistic. The opera is set, as written in 1890s Vienna. I find the themes and circumstances of the opera completely relatable to America today: a prank in which, at a costume party, a rich guy convinces his best friend to fly on his costume bat wings off a balcony sounds like something you might read in your local paper, cringing over your morning coffee. When I first read Tom Petiet’s wonderful translation of the libretto and dialogue, I found it charmingly contemporary and undeniably Viennese. Therefore, I decided to set the opera in what I like to call a fantasia on contemporary Vienna steeped in its classic roots. As in many European cities, the old and the new co-exist in this production. Joshua Kigner (Scenic Design), Norma Heller (Costume Design) and I were inspired by everything from art nouveau architecture to hyper-contemporary formal fashion and many things in between. By choosing not to restrict ourselves to rules of either a long-gone era, or to norms of the easily-recognizable American present, we found enormous creative freedom to create a world for the opera unique to itself.”

Dr. Tiffany Chang returns to as music director to confront this “acoustically challenging” historical theater. She will be leading a 39 piece orchestra with an array of percussion instruments to present a score that she describes as “….fast-paced and incredibly funny, coupled by an orchestration that is witty and colorful

BMInt: What does “acoustically challenging” mean, no pit, no flyloft, no wings, no pit and too reverberant, right?

Artistic Director, Rebecca Rapoport-Cole: Correct—as this is technically not a theater space, we do not have the conventional theater space resources. In essence, we transform the Great Hall into a theatre that works for our production needs. For the orchestra, we create a space that is used as an orchestra pit by placing the orchestra on the floor, downstage of the singers.

So how is the production fully-staged?

We use the entirety of the hall, including entrances and exits from the isles as well as administrator offices as back stage space. As we like to work in non-traditional spaces, we embrace the challenges of this space and produce a fully staged opera within it.
Do you hide the iconic Daniel Webster painting and busts of all of the worthies?

As this is a historical site in Boston, we are not able to move or cover the painting or busts. However, we have incorporated these pieces into the staging at various points in the show and have committed to working with them instead of again them. Working in the Great Hall furthers our mission of keeping opera in urban Boston and working in non-traditional spaces while still keeping the ticket cost affordable

The spooky part of the summer comes from Opera Hub, a company, founded in 2007, that is “committed to bringing high-caliber, accessible, fresh interpretations of opera to the greater Boston community.” Considering the liberties they are taking with Marschner’s score and Wohlbrück’s libretto, we asked them to explain themselves:

What, in particular, was wrong with the original libretto/story? How is it improved?
First, the original story and libretto for Der Vampyr were written only six years after John Polidori wrote the first bare-bones vampire story, based on his patient Lord Byron. Since then the vampire mythology has expanded exponentially and our culture has become saturated with ideas and images about vampires, making them both thrilling and an object of much eye-rolling – the tropes used in the original are stale at this point. Second, the plot of the original revolves earnestly around ways that women are sexually owned by men in a way that we were not comfortable presenting on stage, even as a museum piece. Third, there are significant structural dramatic issues with the piece, including several characters who show up in one scene only and are never seen or referenced again. Finally, the text setting of the original is not exceptional. The words of German are clunky and not well tied to the music, making a translation more desirable than with many operas. Since we thought a translation would be appropriate anyway, we decided to go further in adapting the text for a more modern sensibility.

What instruments does the adaptation feature and why were those particular instruments chosen?

The new instrumental arrangement we are using is for piano, violin, oboe, horn, bass, and timpani. We were looking for a small ensemble that would fit in the Boston Center for the Arts Plaza Theater both physically and acoustically. As our arranger Moshe Shulman, who also arranges frequently for the Commonwealth Lyric Theater, says, “this is the best pallet of colors and their combination I could think of: the flamboyant violin, the lyric oboe as contrast to violin, the penetrating horn, the supporting double bass and the glue to all – the piano.” The timpani adds significantly to the sense of drama and suspense.

We have also pared down the number of singers required to 13, including all leads and ensemble members. Each singer has a distinct character and role in the plot. We have made conventional cuts of certain repeated music, cut one ensemble number, and switched the order of two numbers in the second act. We also significantly re-voiced the drinking song and quintet so that it does not include a full chorus and have an alto singing some of the tenor parts. Other than that, our changes to the actual music are minimal and consist of a few rhythmic shifts in melodic lines to accommodate the new text.

What is the inspiration for the staging?

The staging really flows out of the new libretto and Marchner’s thrilling Romantic music. We have also worked hard to create a staging that works for the three-quarter thrust stage of the Plaza Theatre, which is quite unconventional for opera. It is almost like doing theater in the round, with the audience on three sides instead of four. Most of our singers have never worked this way before as opera is almost always performed on a proscenium stage.

Where is it set?

The adaptation is ostensibly set in Victorian London, which is the setting for Bram Stoker’s “Dracula,” and the sort of aesthetic that people tend most often to associate with classic vampire stories. However, there are a lot of anachronisms scattered throughout the piece, including numerous references to more contemporary pop culture vampire stories.

Both Opera Hub and NEMPAC are semi-professional organizations featuring a mixture of students and emerging professional artists. Their productions are dependably cutting edge, experimental and fun. It’s summertime in Boston, why not make it memorable and go check out an opera or two?

Joseph E. Morgan is a PhD graduate of Brandeis University, where he studied early German romantic opera. He lives and teaches in the Boston area.