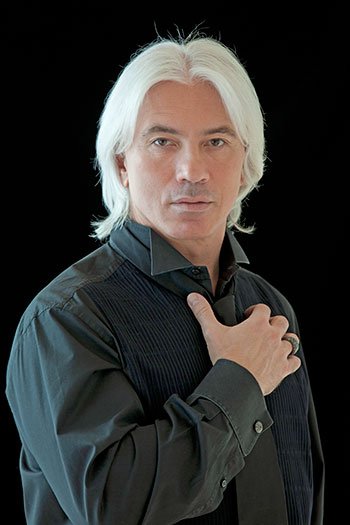 The People’s Great Artist ambled onto the Jordan Hall stage yesterday in a modern frock coat with exaggerated lapels sporting sparkling jet ornaments. The familiar organ facade was illuminated with unfamiliar red floodlights. His silver locks shining, the leonine personage leaned against the piano, crossed his legs, arched his back and flashed a 1000-watt smile. Before a sound had emanated we were in the thrall of a Lisztian mania inducer of Jaggerian swagger and a Jolsonian need for adulation. And yes, the Celebrity Series in the last event of its brilliant season, even provided a fine, named pianist.

Upon seeing Jordan Hall (again) Dmitri Hvorostovsky told his handlers, “Is small; I will shake the rafters.” And so he did. What an instrument! —we heard more than two octaves of the most burnished and powerful baritone we ever encountered, in a staggering demonstration of personality, acting, musicianship, and means of vocal production that would best any Soviet 5-year plan. In song after song, Hvorostovsky poured forth shining fountains of tone. His mezzo-voce was more forceful than most singers’ forte. At first we had to adjust expectations: it was not going to be the usual fussy lieder recital wherein the singer’s technical struggles masqueraded for those of the character depicted. Indeed, we heard monumental singing which effaced our memories of all local baritones. Low notes resonated in our chests as well as his, and high notes (up to Gs) simply were an order of magnitude more exciting than anyone else’s.

There were bursts of applause after each of the 20 songs and two encores. And each time, after immersing himself in the theatrical depression of a Russian master, Hvorostovsky stepped out of character to beam those perfect teeth and mane. We didn’t mind one whit; we came not only for his generous musicianship but also for his oversized personality.

The evening comprised three sets of songs—nearly every one a monument to the tragic Russian soul, and nearly every one a demonstration of the artist’s complete dynamic and vocal range. The Tchaikovsky grouping began with “Na son gryadushi” (At Bedtime); ostensibly a lullaby, this soulful, dramatic outpouring lulled no one to sleep. Hvorostovsky was intensely artistic and musical in each song, but the wistfulness, nostalgia and tearfulness were of manlier mien than one normally encounters. In “Frenzied Nights,” evoking insanity and insomnia, there was no holding back. (Never did he hold anything in reserve, in fact.) “The Nightingale” ended on the longest sustained note we have ever heard sung, and this on the word zacherpnut, in liquid, almost Italianate Russian. In “I Bless You Forests,” he took the final three stanzas literally, and did as Tolstoy instructed: O! If only I could embrace you all / Enemies, friends and brothers, and all nature / And enfold all nature in my arms.

Four songs by Medtner finally allowed pianist Ivari Ilja to emerge. Throughout the evening, Ilja provided the power required to support the singer’s enormous voice, but beginning in “Gone Are My Desires,” Medtner’s interesting keyboard writing, rippling runs evoking winter winds and so forth, gave the piano license to be noticed.

After intermission, Hvorostovsky’s expressive face, mobile physiognomy, and clarion calls reflected his complete engagement with text and character in 11 well-chosen Rachmaninoff songs. In “Don’t Believe My Friend,” in the lines, and now the waves are running back with roaring, we heard one of the finer instruments of any kind ever to give voice in Jordan Hall.

The purpose of the last set in any celebrity recital is, of course, to set up the encores. Hvorostovsky’s full operatic scope appeared for the first time in Iago’s “Credo” from Verdi’s Otello. Listen here to this unforgettable personification of evil, albeit without the visceral involvement of live presence. The night ended with another signature piece, the Neapolitan song “Passione” by Ernesto Tagliaferri: online it’s here with last night’s pianist.

What a voice. What a personality. What power and ease. Altogether, Dmitri Hvorostovsky seduced by command rather than caress, yet what glorious command. It’s a pity there appeared to be none of Boston’s better-known singers in the audience. But we can understand why.

Lee Eiseman is publisher of the Intelligencer.