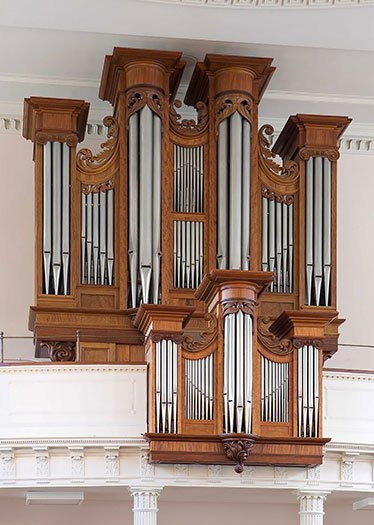 Organist Thomas Baugh gave the final recital of Old West Organ Society’s 2013-14 International Artist Series Friday at Old West Church on the C.B. Fisk organ, Op. 55. Baugh’s eclectic program fully exploited the instrument which is renowned for its astonishing versatility, offering the chaste Elizabethan beauty of Orlando Gibbons, two quite different masterworks of Johann Sebastian Bach, the conservative Romanticism of Felix Mendelssohn and Gabriel Fauré, and the super-heated hyper-Romanticism of Max Reger. Director of Music at Christ Episcopal Church in Roanoke, Virginia, Baugh presides over C.B. Fisk, Op. 124. In the interest of full disclosure: I serve on the Board of Directors of Old West Organ Society but had not previously met or heard this player.

He grabbed our attention right away with a vigorous reading of Mendelssohn’s Prelude and Fugue in C minor, Op. 37, No. 1. The work is indubitably an homage to J. S. Bach with its accomplished counterpoint (the prelude is not far from being a fugue itself) and only modestly expanded harmonic vocabulary. Baugh registered conservatively as befits a Romantic composer who adored his musical ancestor: the prelude featured one sound throughout (principal plenum 8’, 4’, and 2’ plus mixture) as did the fugue (the same without the mixture). Baugh’s clarity of texture and firmness of rhythm (especially in the 12/8 fugue) made this a rewarding rendition though some variation of articulation might have enhanced the fugue.

Jumping back over 200 years, the performer next gave us the Fantasy No. 10 in A minor of Orlando Gibbons (1583-1625), highlighting the unsurpassed beauty of this organ’s flute stops. Graceful phrase-sculpting and deft fingerwork in the florid accompanimental figures exchanged between the hands, bore witness to Baugh’s love of this soulful music.

The first of the two Bach works was the Trio Sonata IV in E minor, BWV 528. The highlight for me was the poignant middle movement which the artist played with supple grace; moreover, his thoughtful variety of articulation paralleled that of Bach’s beautifully interweaving figures. Following this accomplished performance of Bach’s deceptively difficult chamber music for organ was one of the composer’s overt showpieces, the Toccata and Fugue in F major, BWV 540. In the toccata Bach displays his virtuosity of compositional technique as well as execution, including canons, swashbuckling pedal solos utilizing the full 30-note compass of the pedalboard of Bach’s day, invertible counterpoint, hair-raising harmonic progressions, etc. Unfortunately, the toccata was somewhat marred by a number of adjacent-note crunches and momentary pushings of the tempo. The fugue, however, was plainspoken and majestic, building to a grand ending.

Maurice Maeterlinck’s play Pelléas et Mélisande inspired music by Gabriel Fauré, Arnold Schoenberg, and Jean Sibelius, all regrettably somewhat adumbrated by Claude Debussy’s admittedly magnificent operatic setting. Baugh has done us a service by transcribing for organ some of Fauré’s most ravishing music, his four-movement orchestral suite of incidental music to the play. Transcribing orchestral music for the organ is an art, and Baugh has done good work. The Prélude’s opening phrase—with its quiet echo—was lovely and slightly reticent with a touch of sadness, giving us some sense of Mélisande at the outset. The movement’s gentle rises and falls reflected the composer’s typically restrained expressiveness, though the main climax (a fortissimo F major 6-4 chord with timpani roll) didn’t seem to arrive and the exquisite harmonies before the main theme’s final recurrence were weakened by insufficient bass. The Fileuse (Spinner’s Song) was taken at a relaxed tempo, though not fatally so. Here the Swell Trumpet stop, even with swellbox closed, was a tad too assertive to represent Fauré’s sweet-singing oboe, but the softly spinning moto perpetuo accompaniment lulled us nonetheless. The Sicilienne, undoubtedly the most often excerpted movement, has a memorable, wistful tune largely assigned to the flute, so Baugh’s choice of a principal stop was unexpected, but his lithe playing offered its own rewards. The Death of Mélisande was noble in grief, a funeral march that built steadily to its main climax; the tapering off ahead of the coda was nicely judged. This coda begins with celestial strings and seems about to head toward the comfort of the major mode before subsiding back into dark D minor. The artist handled it most sensitively, and, for me, it was the most deeply poignant moment of the evening.

Intended for much larger organs than Old West’s, the large-scale works of Max Reger reach the limits of Romanticism: their harmony at times extends to the outer boundaries of tonality; their dynamic range stretches from pppp to ffff with every nuance in between; crescendi/descrescendi and accelerandi/rallentandi frequently extend over multiple pages; and of course, the staggering number of accidentals and 16th-, 32nd-, and 64th-notes confronting the player make these works of Olympian difficulty. Baugh took on the Fantasia on the Chorale “Wachet auf! ruft uns die Stimme”, Op. 52, No. 2, and scored an impressive success. Its dark and somber pppp opening chords had an unsuspected chthonic depth one would only expect from a considerably larger organ in a big acoustic. The sudden ff bursts (“flashes of light in the tomb” or “humanity crying out for salvation”, depending on which commentator you favor) had the dramatic, violent contrast Reger doubtless intended. When the chorale tune made its belated first appearance, Baugh wreathed it movingly in a lovely, unearthly accompaniment. Through the fantasy, the performer impressively handled both the extravagant technical challenges and Reger’s demands for ultra-subtle nuances. He gradually built up to a seemingly inexorable climax but, just shy of it, made a swift but convincingly smooth reduction to piano. The end of the fantasy proper “cleansed the palate” with a simpler texture and more intimate dynamics. Reger concludes the work in an extended fugue with a memorable subject. Baugh took a conservative tempo which allowed him to gradually accelerate later on, an approach which, ultimately, probably generates more excitement than taking a devil-may-care, flashy tempo at the outset. One pre-set piston mishap caused a caesura of silence of a second or two, but it was quickly dealt with and the player forged on, nothing daunted, introducing the first fugal statement of the chorale a phrase at a time. Soon a subtle accelerando and crescendo began to ratchet up the excitement until it climaxed at the final phrase of the chorale, slowing to a majestic tempo and followed by a brief coda of earth-shaking chords.

Given that most of the works performed here are not heard very regularly and in the absence of printed program notes (a brief mention of how Baugh was inspired to transcribe the Fauré, yes, but nothing about the piece itself), I think the audience might have welcomed a few spoken remarks by the artist to deepen our appreciation of this great music. Be that as it may, it is always a pleasure to hear interesting bedfellows. (Mr. Gibbons, please meet Herr Reger; Herr Bach, may I present Monsieur Fauré) because one can expect them all to be well served by this organ in the hands of an accomplished organist such as Thomas Baugh.

Comments Off on Eclectic Program on Versatile Fisk