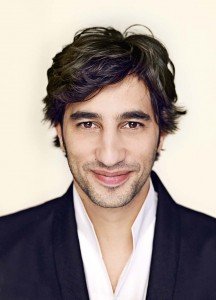 Since “Mandolinist Avi Avital was electrifying to watch and hear… takes the listener to the brink of wildest expectation and then leaps over those boundaries,” according to BMInt reviewer Rebecca Marchand [here], we are happy to direct readers to his first subsequent Boston appearance. At the Regatta Bar in Cambridge on Tuesday, April 8th night at 7:30, Avital will be appearing with accordionist Uri Sharlin and percussionist Shane Shanahan in a crossover concert with a Balkan and Israeli theme, including some composers you might have heard of, Ernst Bloch and Hector Villa Lobos, as well as less familiar ones from other genres.

The Deutsche Grammophon artist who made his Carnegie Hall debut two months ago spoke with BMInt:

There was a time 100 years ago when the mandolin was a very popular instrument on the stage and in the pit. The YouTube clip of the Italian virtuoso Bernardo Pace’s Vitaphone short, “The Wizard of the Mandolin” has always been one of the most amazing examples of popularization of classical music that I could cite. What was going on then (in addition to great comedy), and why have we had to wait until now to have another mandolin virtuoso that the spotlight loves?

A.A.: Absolutely—that was great stuff, a wonderful moment in the history of entertainment. At the turn of the 20th century and for the next 30 years, there were a lot of immigrants coming to the United States, and many of the Italian ones brought the mandolin, which was something of an Italian national instrument in the previous century. So the popularity it gained in the states was due these immigrants. When they came, they were living in the same neighborhoods with the Jewish immigrants, the Irish immigrants. There you had this wonderful fusion with bluegrass, with Irish music, with klezmer music, which led to the transformation of the mandolin into American culture. The example you’re talking about captures a very nice moment of a classical entertainment for that period.

Was the mandolin your first instrument? Did you play any others?

Yes, indeed. When I was eight years old I joined a youth orchestra of 40 kids who were playing mandolin, mandola, guitar, and all the rest of the plucked strings: an entire orchestra of fretted, plucked instruments, though this was nothing like what I’m doing now.

There are almost no conservatories where you can study mandolin. When I went to the Jerusalem Conservatory, they figured that if I wanted a degree in music, I could study with a violin professor, since the instruments have the same tuning. So that is where I learned about repertoire. It turned out to be a great advantage not to study with a mandolin professor, because my experience was completely fresh. This led me to think about transcribing music written for other instruments. It was normal during my studies for me to play violin music on the mandolin. I developed a special technique that would allow the instrument to play the same line as concert instruments like the violin, the cello, or the piano.

As I developed techniques to play this demanding repertoire, I began working with a mandolin maker in Tel Aviv to improve his instruments so they sound good in a modern concert hall, and loud enough to play in an orchestra without amplification.

Tell us about what you’re playing and with whom at the Regattabar on Tuesday night.

The concert is celebrating the release of my second CD, Between Worlds. The idea is to show people that although the mandolin is a classical instrument, nowadays is it mostly associated with folk music, all around the world—whether bluegrass in America, bandolim music in Brazil, or balalaika music in Russia. After my first CD, all Bach, it was this folk identity I wanted to explore. What are the borders? Are there even any, really, between classical and folk? To do this, I chose composers who shared this curiosity, who composed music for the concert hall, art music, but were also inspired by their own traditional music or other folk traditions. The experiments that Bartok did for Hungarian music and Villa Lobos did for Brazilian music are something I wanted to emulate through my interest and my artistic identity.

For this concert at Regattabar in Cambridge I am bringing my other half—the folkloristic side, with a trio, mandolin with accordionist Uri Sharlin and percussionist Shane Shanahan. We will be performing a lot of Balkan music, and some original tunes that all three members of the trio wrote. We’ve been working together for seven years, and this is an opportunity for me to do something a bit different from the normal classical concert I usually perform. And it also reflects some of the album. But there are parts of the show that are going to be more chamber-music-like and integrate some classical themes.

My new program of music lets me explore the borders between classical and folk, as I say, by revisiting composers making the same kind of exploration. But it also reflects my enjoying both musical genres, and the mandolin itself enjoys this ambiguous identity complex.

You will recognize some of the pieces. From my album there will be a Bulgarian folk tune called “Bucimis,” wonderful and an inspiration for the whole album. I was thinking about Bartok’s Six Rumanian Folk Dances, and wanted to add an imaginary seventh one. I’m going to play the Villa Lobos Bachianas Brasileiras and the Baal Shem (Nigun) of Bloch. The rest of the set will be sailing between folk and classical, with Balkan and Israeli accent.

Is any of the music on the disc and on the program written originally for mandolin?

Only the csárdás of Vittorio Monti. It’s a very popular tune that has been arranged and rearranged for any possible instrument; in fact it is so popular that it has led people to think that Monti was Hungarian, because the csárdás is a Hungarian folk dance. Nevertheless, Monti was a Neapolitan composer who write this piece as homage to the Hungarian folksong. Monti himself played the mandolin and wrote other pieces for it, including a methode. But most people think of Monti as a classic one-work composer. What I like to do is reimagine the csárdás, because a lot of the recordings tend to exaggerate the gypsy side. I try to imagine Monti in Napoli; it’s so much more Italian to my ears. An Italian tries to compose Hungarian music and what is the result?

I enjoy playing this game of cultures.

If someone had told me that Deutsche Grammophon would have had a mandolinist as a featured artist, I wouldn’t have believed it. How have you made the instrument so popular that you have a major label?

It is a result of a wonderful collaboration. This is the second DG CD. The first was dedicated entirely to Bach, and I remember going to DG and telling them, Look, I have this great idea, how about recording Bach concerti on a mandolin? I really didn’t expect too much, but I found a surprisingly open-minded, very fresh approach to music which is being adopted now by the entire industry. And the opportunity to offer something fresh and innovative in the context of classical music can be challenging, when you’re reinterpreting music that is 200-300 years old. But DG was very encouraging, and we started working, and in fact Between Worlds is even more innovating. They let me go farther with my ideas and fantasies.

You seem to play in a variety of venues.

In January I had my Carnegie Hall debut concert., playing Bach and contemporary classical music. That was a big event for me and for the mandolin; the hall was packed. The next day I performed at a bar in Brooklyn that can literally hold a maximum of 20 patrons. The combination of playing at Carnegie Hall and two days later at a jazz bar—that is something I really treasure.

Comments Off on Avital Sails Into Regattabar