Portsmouth, New Hampshire, a seacoast city 60 miles north of Boston, and famed for Strawbery Banke and the Peace of Portsmouth that ended the Russo-Japanese War in 1905, certainly didn’t have an orchestra when I lived there in 1971, but that has changed. Today its Portsmouth Symphony gives five concerts a year, under the inspired directorship of John Page, also known to some as the conductor of the Tufts University Symphony. Sunday’s performance in the acoustically quite passable, landmark 1878 Music Hall [restoration is ongoing see here], gave a convincing testament to the vitality of orchestral performances even far away from big cities. Established 17 years ago, it now comprises 65 “local professionals, educators, dedicated amateurs and advanced students.”  The hall was very nearly full, and a substantial number of the audience were college age or younger, which I found heartening. Community support obviously counts, and one doesn’t have to play crossover favorites or light classics to achieve it here.

Sunday’s program featured only two works: Beethoven’s Sixth Symphony, and the Rachmaninoff Third Piano Concerto. John Page conducted the Beethoven without a score, and got a very good sound; a few occasional minor weaknesses hardly interfered with the overall expression and, above all, the intelligent performance. The “ Pastoral”  is always a favorite even when you aren’t thinking of Disney’s Fantasia, and although it’s a truism to say that it’s unlike any other Beethoven symphony — all nine, of course, are unlike any others — one is hard put to find any other work in any of Beethoven’s genres that has this kind of pictorial quality. Schoenberg commented on this when he remarked, at the age of about 70, that it suddenly occurred to him that in the first two movements there are almost no minor chords; that’s a profound realization, after all, but it hardly means that he had failed to understand the Sixth Symphony until then. (Nobody ever talks much about the strange harmonic succession of F major and D major in the first movement — “Cheerful Impressions on Arriving in the Country;” it reappears at the beginning of the third movement, “Merrymaking.”)

Rachmaninoff composed his Third Concerto in D minor in 1909 for his first tour in the United States, and played the premiere performance with the New York Symphony Society conducted by Walter Damrosch; he played it again a few days later, this time with Gustav Mahler conducting. (Some other works composed that year were Stravinsky’s Nightingale, Act I; Schoenberg’s Five Pieces for orchestra, op. 16; Charles Ives’s Piano Trio; Ravel’s l’Heure espagnole.) In 1928, again in New York, he met a 24-year-old pianist from Kiev named Vladimir Horowitz. Rachmaninoff coached Horowitz’s practicing of the Third Concerto, but was so stunned by Horowitz’s brilliant playing that he never again performed the work himself. The Third Concerto has always been considered like Mount Everest among the concerto repertory; not as original a work as the more popular Second Concerto (in C minor), nor as grandiose as Tchaikovsky’s no. 1, nor as laid-back as Brahms’s Second Concerto — another killer in the difficult repertory, the Third Concerto nevertheless is a major spectacle with many moments of fine pianistic subtlety and beauty. It is easy to find fault with the excesses in the work — chords that are too massive, filigrees and passage work that have too many notes, cadenzas that push against the bounds of good taste. Horowitz saw these all as steeplechase obstacles to be vaulted over with high speed and even violence. But the Portsmouth soloist, Arlene Kies, gave us a different kind of reading that I found very satisfying. She let us know above all that the Third Concerto, more than a work that bursts like Roman candles, is one that sings. All the big stuff was there, as big as it needed to be, but in a relaxed tempo that allowed Rachmaninoff’s excellent sense of cantabile melody and textures to be displayed in a way I had never heard before — even in performances by Gutierrez, Argerich, and of course in Rachmaninoff’s own recording. Rachmaninoff was a tall man, Kies is a short woman; both had all the necessary strength to bring out the rich harmony without noise or distortion. I remembered, too, from Kies’s performance that Rachmaninoff himself was one of the great Chopin players of all time.

Arlene Kies’s outstanding piano performances, as soloist, accompanist, and chamber musician, have been well known in New Hampshire for 25 years and more, and she plays in the Boston area from time to time; she teaches at the University of New Hampshire. I’m waiting for the next time I can hear her, whether with orchestra or alone on stage. As for John Page and the Portsmouth Symphony, they have one more concert to go this year, on June 8th, also in the Music Hall, and the program includes two superb works, Debussy’s Prélude à l’Après-midi d’un faune and Stravinsky’s Symphony in Three Movements. Highly recommended for a community concert.

A week after this performance, Kies learned that the breast cancer she had subdued years earlier with surgery and chemotherapy had recurred. This morning (2/11/16) she lost the battle. My partner, Lois Grossman, and I visited her in New Hampshire last Saturday, where we found her weak but cheerful, able to eat and laugh, and well-equipped with memories of good piano playing.

Born and raised in Providence RI, Arlene (Pepe) Kies studied piano with Stanley Siok and Wayne Farrell, and received her BM and MM in piano performance with honors from NEC, on complete scholarship. There she studied with Theodore Lettvin and at one point had lessons with Byron Janis. She was recipient of a Fulbright to Vienna as well as a New Hampshire Individual Artist’s Fellowship. Kies and her husband, Chris Kies, came to UNH in 1980. When Chris, then working toward a doctorate at Brandeis, dedicated a larger portion of his time to composing, Arlene took over more of the piano teaching at UNH, in addition to working on her solo repertory. 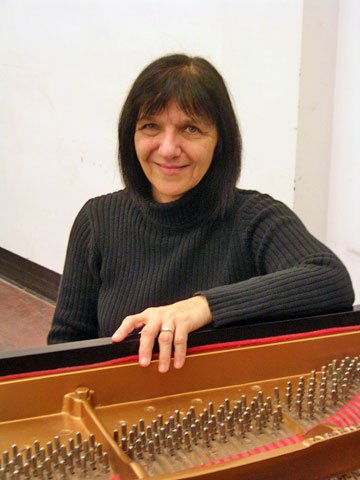 With a big and fearless technique, she had a good command of Bach through Beethoven, but was particularly attracted to the Romantic masters and to new music, especially by younger contemporaries. She was the only pianist I ever knew who tackled such big pieces as Granados’s Goyescas and Schulz-Evler’s Concert Arabesques on Blue Danube, and she once played all four of Chopin’s Scherzos as part of a recital (describing the difficulty of the E-major Scherzo as “like walking on eggs”). In 1983, when I was department chairman at Tufts, Vivian Taylor and I persuaded Kies to come to Medford once a week to teach piano. Eventually she gave up that 67-mile trip, preferring to stay closer to home and teach at Phillips Exeter Academy, and to raise three daughters. She did visit Tufts again a few years later, when I gave a lecture-recital on Chabrier’s music and the two of us played the Trois valses romantiques for two pianos, one of the most gratifying performances I can remember. At UNH Arlene tied herself to as many as 60 events each year – chamber music, vocal and student accompanying, managing student recitals, and annual solo recitals and concerto appearances, always with outstanding skill and professional maturity. She and Chris were a good duet team as well, and twice they visited us in Eastport Maine, to play seldom heard, exciting music: Stravinsky’s four-hand arrangement of Petrushka, Brahms’s own arrangement of his D-minor Concerto for one piano four hands (hard to believe that it exists at all; it was terrific).

Last year Kies received a Stephen Sondheim Inspirational Teacher Award in a ceremony at the Kennedy Center. That national news came as no surprise to the hundreds of students at UNH and Tufts who remember her fine instruction, and to the hundreds more who cherish the memory of her performances. I will also remember some wonderful Italian cooking. Most of all I’ll remember a loving friend. Arlene Kies was one of the best.