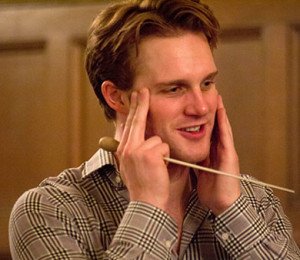 Not the least among the “embarrassment of riches”(complete particulars are here) that Discovery Ensemble is encouraging us to expect at its Jordan Hall concert on Sunday is the exciting announcement that its director, Courtney Lewis, has just been named Assistant Conductor of the New York Philharmonic. We salute the young maestro and have engaged with him about his new role.

BMInt: Congratulations on your appointment with the NY Philharmonic. Now there are two members of the Discovery Ensemble acting as assistant conductors of the NY Phil: you and Joshua Weilerstein, the DE concertmaster. How unusual is that?

C. L.: It’s great, and it reflects very well on Discovery Ensemble and the caliber of its musicians. Josh isn’t playing in Discovery Ensemble any more, and he will be stepping down from his NY Phil position at the end of the summer, so we won’t exactly overlap, but we are good friends and it will be very helpful for me to talk with him about what the job is like from the inside before I begin.

Yes, the whole orchestra for the Young People’s concerts, that’s right. And I’m looking forward to subscription concerts in 2015/16.

Will you be expected to explicate in the Leonard Bernstein mode at those concerts?

Yes, absolutely. That New York tradition is very strong. It’s something that I have done a lot of with the Minnesota Orchestra and also with Discovery Ensemble, so I’m looking forward to that a lot. I’m used to planning what I’m going to say, but working without a script. There is an excellent education department at the New York Phil, and I’m excited about working with them.

In what ways will you be working with NY Phil Music Director, Alan Gilbert?

I’m assisting him next year during twelve weeks. The work will involve attending rehearsal and preparing repertoire. That’s something I’m very excited about and is one of the main reasons I decided to apply for this job. What Alan Gilbert has done with the NY Phil since he became music director is really extraordinary—nothing less than completely revitalizing the programming. And the kind of guest conductors he’s invited, the education projects that they’re doing, their touring and festivals: these are the things I really admire. There are a lot of overlaps with Discovery Ensemble in terms of programming unusual repertoire in such a way that you don’t alienate the existing audience.

I’m looking forward to assisting guest conductors such as Christoph von Dohnányi, Thomas Adès and Esa-Pekka Salonen. There is a lot of interesting repertoire to learn, right from my first week, with the U.S. premiere of Unsuk Chin’s Clarinet Concerto.

My job is to know all the repertoire when I’m covering so that I can step in to conduct should anything happen. That means spending time between the rehearsals talking to the conductor about what he’s doing, and giving feedback about the orchestra balance in the hall.

Bostonians will be able to congratulate you at your forthcoming Discovery concert entitled “An Embarrassment of Riches.” Does that mean there’s too much music? How long is the concert and how do the pieces fit together?

Well let’s see, how long is the concert? I think we’ve got about 100 minutes of music, which makes it the longest concert we’ve ever given. Each year we’ve programmed an Austro-German repertoire concert that looks on paper like something quite traditional, but always with an unusual slant. Last year we played a program of Schumann’s Fourth Symphony with Beethoven’s Fourth Piano Concerto but we also had the Schoenberg Second Chamber Symphony, which hardly anyone plays. And that was a real success; although it’s not repertoire that we play a lot in Discovery Ensemble, we enjoy it a great deal because the idiom is so familiar.

The idea of Sunday’s program is to take four pieces that aren’t obviously related, and find new connections between them. We start with Schubert’s Unfinished Symphony. This is a symphony we all know well, and it is also a piece, especially the second movement, which is seen as optimistic. I’ve always felt there is a great deal more ambivalence in the music than people initially imagine. The idea was to program Schubert with other Viennese pieces that also have this kind of ambivalence. So we will play the Three Pieces from Berg’s Lyric Suite. In many ways, Berg is the culmination of Romanticisim. This is music that, while it’s expressive, is constantly modulating between nuances of insecurity, uncertainty, ambiguity and ambivalence. We end with Brahms’s Third Symphony, my favorite Brahms Symphony. In the first and last movements it contains some of the most dramatic music he ever wrote. It ends in F major, seemingly resolved, but it’s a resolution that one can’t really trust, because F major has been undermined from the symphony’s second chord, making it an unsettling resolution. I think Brahms wanted to audience to feel slightly uneasy at the end of the symphony, and in that way it’s very true to life: nothing is ever an absolute triumph.

Then in the middle of all that we have something completely different, Haydn’s C major Cello Concerto with a wonderful German cellist, Nicolas Altstaedt. We worked together on this concerto about three years ago in Belfast with the Ulster Orchestra for a BBC Radio 3 broadcast. As soon as I met Nicolas I wanted to bring him to Boston, because he’s an artist who fits what we’re looking for in Discovery Ensemble. He’s a similar age to all of us and he’s approaching established repertoire in a really interesting way. He plays in a manner that relates classical repertoire to contemporary music. For example, in the first movement, he plays an incredible cadenza could have been written by Ligeti. And that kind of continuum between new and old is really appealing.

It’s a big program, but it makes sense as a journey. I have to say it’s one of the concerts I have been looking forward to the most.

Is there any ambivalence or anxiety in the Haydn?

Not really, but that’s not why it’s there. Every concert needs contrast, and we have three pretty heavyweight pieces around it. The Haydn acts as a scherzo in the middle of the concert, if you like; as a palate cleanser. 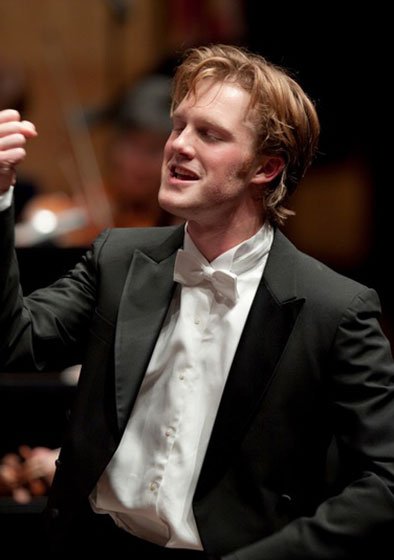 A few years ago Pieter Wispelwey played the solo part an octave above what was written to carry over a large orchestra. Perhaps Nicolas Altstaedt won’t need to do that with your ensemble.

Wow, did he really do that? Hopefully the balance will not be a problem, because Nicolas will be playing it as written! There is one particularly unusual aspect of Nicolas’s performance: he plays the finale extremely quickly. It has the most wonderful lightness and character.

We’re used to hearing Brahms with large orchestras. The smaller Discovery Ensemble though, always plays its heart out. Will the results be juicy enough?

Of course this is an experiment. Apart from in the Haydn, our string section will be larger than usual. Instead of 8.8.5.5.3 we will employ 10.10.7.6.4. Those eight additional musicians make a huge difference. And of course Brahms enjoyed performances of his symphonies with smaller-sized orchestras, such as the Meiningen Court Orchestra, which gave the premiere of this Fourth Symphony. So there is a legitimate historical precedent for the size of our string section. We’ve tried very hard during the rehearsals to get more transparency in the wind and brass chords so that the strings aren’t drowned. The winds and brass can’t play molto sostenuto the way they would in a full-sized orchestra. But I’ve been surprised at how easy it’s been to solve the balance problem.

So often Brahms is played in a stodgy way—one thinks of a sort of brown effluvium of sound. It’s been a lot of fun trying to expose other colors. It’s rather like rubbing away at an old painting to see what’s underneath the grime. I hope the audience will hear a new kind of transparency.