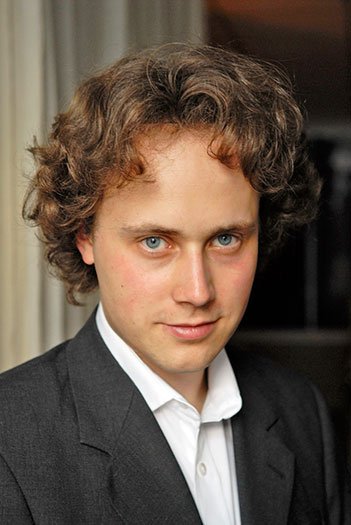 The set of keyboard toccatas (S.910-916) composed in Bach’s 20s comprises seven dramatic, finely crafted organ-like works that get performed way too seldom, and, when they are, typically are not played seriously enough. (Most of the fugues do sound young and often faintly idiotic, it’s true.) At Calderwood Hall last Sunday, however, Alexander Schimpf’s presentation of S.914, in E minor, was utterly solid, regular yet with a wonderfully assured freedom and expressivity over the basic structures. Schimpf took its fugue at what felt to me too fast, but for some reason many keyboardists do that with Bach.

After this opening selection, I thought to myself, How nice, still another worthwhile young pianist well on his way, and in Bach no less. (It’s also pleasing that Schimpf looks quite like the younger bro of Fanny and Felix Mendelssohn-Bartholdy.) Alas, the rest of the recital was a letdown, and that did not appear attributable to his having a bad day.

Yes, there were rich, powerful, probing inward moments, some anyway, in Brahms op. 119 (such counterpoint), on Debussy’s “Happy Island,” and in Beethoven’s Hammerklavier sonata op. 106. (How can anyone not achieve profound stasis in 106?) Other of the playing certainly gleamed brightly, often rather too gleaming, rather too bright. Yet not only were these moments not enough, their effect was also reduced by the absence of poetry, misterioso, majesty, leggero. Brahms 119 doesn’t call exactly for lingering or perfume, but something close to; II was crisp but chiefly that, III joky but chiefly that, and IV, while not perfunctory, needed to exult more, and when it did a bit at the end, Schimpf’s penchant for speed vitiated all. Actually, it’s more than speed; Schimpf positively favors impetuosity. His Debussy felt low in joy, eros, singing, and general Watteau-flavored impressionism (those are the inspiring paintings). Dude, suggestion: relax and smell the flowers, practice slowly, listen more intently into the music.

Since impetuous also means thoughtless, the word is overstatement, surely. Schimpf simply needs to savor, not think more, or harder. He lost his way in that brutal, tense Hammerklavier fugue, and I noted to myself, How nice to hear an honest mistake in this day and age. It didn’t unnerve him; he recovered with aplomb. For a moment afterward, the playing eased, as often happens with pianists’ encores. But soon enough it retightened and stayed there, and it became clear to me that digital slipups were the least of Schimpf’s problems.

Another listener in the press section pointed out that with this approach some Stravinsky or Berio might have been appropriate, adding that he would like to hear Schimpf again in a decade, since this long afternoon sounded still full of ‘competition’ playing, and Schimpf has won lots of those. I very much hope for a broadening and deepening development, although this pianist is already in his early 30s, not early 20s.

Ed. Note: This article has been modified.