The 50th anniversary of the C.B. Fisk organ in King’s Chapel was celebrated Sunday in an outstanding concert that included the premiere of Robert Sirota’s Apparitions, for organ and string quartet. (See preview article here.) Musicians for this festive commemorative concert included Heinrich Christensen, organist and music director at King’s Chapel, and a string quartet comprising violinists Gabriela Diaz and Gabriel Boyers, violist Noriko Herndon, and cellist Rafael Popper-Keizer. Throughout this concert the stellar performances of all five of these topnotch players perfectly honored organ and occasion.

February 2 1964 was the date of the dedication recital for this three-manual tracker, a new achievement in contemporary organ building in the US. A description of the instrument is on the Fisk website [here]. The recital was played by Leonard Raver, with a brass and percussion ensemble from NEC conducted by Daniel Pinkham, King’s Chapel music director and NEC faculty member. The occasion must have been somewhat solemn—the Pontifical Mass for President Kennedy, featuring Mozart’s Requiem, had taken place at the Cathedral of the Holy Cross only two weeks previous. What would the future bring, and what would be the occasions and events to come in King’s Chapel over which this new organ, a masterpiece, would preside?

It is likely that a few present for the 1964 dedication recital were present Sunday for the anniversary. Regardless, many if not most of those there Sunday had known one or more of the three people primarily responsible for this organ: Charles Brenton Fisk, the builder; Daniel Pinkham, the then relatively new music director at King’s Chapel (appointed 1958); and Amelia Peabody, who gave the organ as a memorial to her father, Frank, and brother, Everett (indeed, the instrument was dedicated as the Peabody Memorial Organ). John Ferris, university organist and choirmaster at Harvard, served on the organ committee, and E. Power Biggs served as consultant throughout. These people, and the many others who have played a role in the history of the organ, would have been pleased and perfectly in synch with Sunday’s feast, titled Fisk at 50: Music for Organ and String Quartet.

Within King’s Chapel the Fisk is prominently situated, at the rear of the three-sided balcony. The 1750s building is surprisingly elegant and colorful inside in comparison with its austere granite exterior, and since space is at a premium in the choir loft, the imposing and exquisite organ case misses the ceiling only by inches. Fisk incorporated into this case three panels from King’s Chapel’s 1713 Brattle organ (once in an earlier building, now at St John’s Episcopal in Portsmouth NH). Two panels extend horizontally from either side of the keydesk, and the third, much larger panel is on the left side of the case (see photo). For this concert, the string quartet sat immediately to the left of the case, and the wood must have served its purpose with their instruments too, richly projecting the sound.

Two brief pieces preceded the Sirota premiere and set the tone in this beautifully constructed concert (Christensen has garnered much praise for his innovative programming). The opening work was Daniel Pinkham’s one-movement Sonata no. 1 for Organ and Strings (1943). This piece has sections that are hymnlike, with gentle harmonies and Vaughan Williams-like movement. The audience immediately enjoyed the pleasing and not often heard sonority of organ and strings together, as each medium enhanced the other. For listeners with nostalgic thoughts on this 50th anniversary, the work was an eloquent reminder both of Pinkham and of Fisk, who  possessed a gentle voice and was a collaborator.

Charles Ives’s Adagio cantabile, the third movement of his String Quartet no. 1 (1896), followed, and it too has lyrical, peaceful passages at the beginning and end. The players had amazing intonation in the sustained chords of Ives’s harmony: one imagined that they used an “Ives temperament” to make the chords sound even more luscious than they look on paper. Ives used as intermittent themes phrases of the beloved hymn “Nettleton” (“Come thou fount of every blessing”). This easily remembered four-line hymn which has only two lines of music, presented AABA, lends itself well to musical development. (It was one of four American hymn tunes chosen by Sirota as themes for Apparitions.)

President of the Manhattan School of Music 2005-2012, Robert Sirota has a personal inclination toward writing for organ and strings. His wife, the Reverend Canon Victoria Sirota, began her career (in Boston) as an organist, and their two children are professional violists. I greatly admired this new work, but much more needs to be written about it than can be done after one hearing and not seeing the score, so these are first impressions.

The first movement, “My Shepherd will supply my need”, uses the tune “Resignation.” There are multiple rhythmic presentations of a similar-notes phrase and at times a Hindemith-like sound. An ostinato pattern is traded off skillfully between organ and strings (Christensen again earns admiration for his organ and ensemble technique). The melody appears in a high register and then in a pedal reed.

Sirota has referred to the second movement’s tune, “Restoration,” as having “primal power.” The text paired with this tune in “The Hymnal 1982”(Episcopal) is “Jesus calls us,” thus the title for the movement. In “Southern Harmony” (1835) it appeared with this text, also primal: “’Mercy; oh thou Son of David!’ Thus blind Bartimeus prayed; ‘Others by thy word are saved, Now to me afford thine aid.’” Sirota begins the movement with sustained, very soft organ chords. Quick ascending scale passages on do, re, mi, fa begin appearing in the strings, then in the organ; it is most interesting to hear the organ so quickly repeat the strings. The melody seems at first obscured, then appears in the pedal.

It is movement three that uses the tune “Nettleton” (already heard in the Ives). Beginning with the strings, the melody is played at a high pitch by the first violin. Then a short, this time descending figure begins and cascades with many repetitions. The B line of the melody is heard on the organ, played on a reed stop (probably the cromorne). A two-chord descending slurred figure appears in the strings—perhaps this is from line B—and the movement ends subtly with these quiet chords, not reaching the tonic.

The last and longest movement, “What wondrous love is this,” on the tune ‘Wondrous Love,’ begins brilliantly and demands superb coordination between organ and quartet. The melody has multiple presentations and is heard in augmentation on the organ. In a toccata-like new section begun by the organ, then moving to fascinating permutations and entrances of the melody, Sirota has a composition that sounds ready to be scored for large orchestra. A wonderful accomplishment in his writing here is that the excited, accelerating music is shared by quartet and organ equally. One expected the interwoven fortissimos to continue to the end; however, the addition of more stops and probably a change in the writing style for the strings resulted in the organ overpowering them. When the organ part ended, audience members who could not see the quartet began to applaud, but then stopped once they knew the strings would conclude the piece in a few more measures. An adequate description of the end of the work, then, will have to wait for another performance. Sirota’s Apparitions clearly is a great listen and a welcome addition to the repertory for organ and instruments. 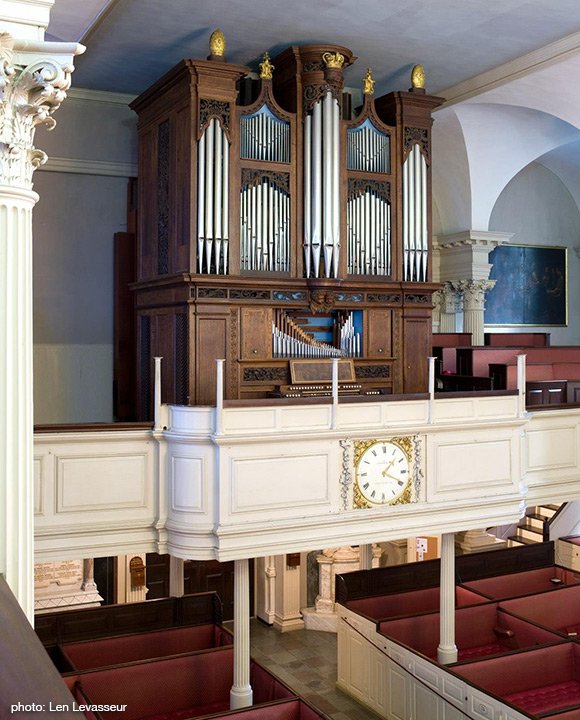 The concert continued with Capriccio, for Violin and Organ (2006) by Naji Hakim (b.1955). Diaz and Christensen played this tour de force with exceptional skill and it was a joy to hear it. The piece already is famous and it has the special challenge of requiring the organist to cross left hand over right at an exceedingly fast tempo. Hakim describes it in this way: “Capriccio for violin and organ develops a lively and dancing theme in an abridged sonata form. The exposition opens out through developing thematic derivations of a same joyful theme on the violin. A contrasting sensual second theme with soft percussive accompaniment on the organ leads to a varied recapitulation of both ideas before the brilliant coda.”

Antonio Soler’s Organ Quintet III in G Major was the closer, a five-movement work that may have been written near the time King’s Chapel was built. The music is delightful and the performance again showed the virtuosity of the five performers.

This concert will repeat in June as one of many events for the 2000 organists attending the biennial national convention of the American Guild of Organists, this year hosted by the Boston Chapter. King’s Chapel’s Peabody Memorial Fisk organ has been featured at two such previous gatherings in 1976 and 1990. Robert Sirota’s Apparitions, for Organ and String Quartet was commissioned by the AGO for the June convocation. I’m looking forward to hearing it again.

Joyce Painter Rice, an organist, recitalist, choral conductor and sometime concert organizer, has served in music capacities in a wide range of religious institutions. She is devoted to music for the organ and shares that concern through volunteering in the American Guild of Organists and at the Methuen Memorial Music Hall, home of the Great Organ.

Comments Off on Fisk Organ at King’s Chapel Turns 50