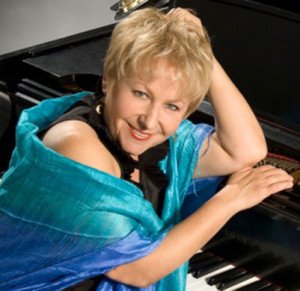 On February 23, Tatyana Dudochkin, NEC’s prep school Piano Ensemble Program chair, will present her annual (since 1990) Jordan Hall concert honoring a composer in an anniversary year. Last year it was Verdi, to mark his 200th birthday, and this year, somewhat unusually, she has chosen William Shakespeare, born 450 years ago. “I considered several composers, but none of them really moved me,” she says. “I have to be burning with excitement about their work.”

Too diplomatic to mention the names of those passed over, Dudochkin stated that the music inspired by Shakespeare’s plays “could fill a library, and so many masterpieces.”

“Each generation, each era is looking for new responses,” she noted in a recent BMint interview. “This is the vitality and attractiveness of Shakespeare’s works. Beethoven, Berlioz, Brahms, Gounod, Debussy, Rossini, Verdi, Mendelssohn, Strauss, Prokofiev, Khachaturian, and our contemporary composers draw from this inexhaustible source of imagery and harmony.”

Many of them will be heard in Sunday’s concert which starts at 8:00 pm. “If I included all my favorites, the concert would last for a month. I have to make choices. I put aside what has been long-loved, and bring something less-known but interesting.” For instance, the scherzo from Mendelssohn’s A Midsummer Night’s Dream will be performed by flute quartet, and the wedding march by string quartet.

“Then I have to find performers who are available,” she continues. This year, for example, she enlisted conductor Hugh Wolff, a professor at NEC to perform Prokofiev’s suite from his ballet Romeo and Juliet, on which Wolff has been working with his students.

“Adam Klein is a tenor at the Metropolitan Opera, and an incredible Romeo and Otello, so I asked him to join us. My daughter Yelena Dudochkin is a soprano and a wonderful Juliet. She will sing a duet with Klein from Gounod’s Romeo and Juliet, as well as Juliet’s waltz.” This is the seventh time Yelena Dudochkin has performed with her mother in these concerts. Dudochkin herself will perform a piano version of the “Montagues and Capulets” sequence by Prokofiev. NEC colleague Aldo Abreu will play recorder with Francis Conover Fitch on harpsichord. Lutist Victor Coelho will accompany soprano Jennifer Caraluzzi. Newton boy alto Clark Rubinstein will sing Schubert’s setting of “Sylvia.” Soloists from Commonwealth Lyric Theater directed by Alexander Prokhorov and Lidia Yankovskaya will provide choruses from Verdi’s Falstaff, as well as some from Berlioz.

Interspersed with the music will be spoken intervals about and by Shakespeare. Swedish actor Jonas Nerbe will present an excerpt from his one-man musical play William that chronicles the emotional upheavals that shaped Shakespeare’s life. And NEC president Tony Woodcock will put his British accent to work emoting the St. Crispin’s Day speech from Henry V. Ron Della Chiesa will serve as master of the revels.

It takes Dudochkin about a year to put a program like this together. “I have a few ideas, then if I am inspired, I go to this composer’s country in the summer. For Villa-Lobos, I went to Brazil. For Verdi and Puccini, I went to Italy. For Debussy, I went through the Paris looking for everything I could find about him. Deep research about the composer.”

She was reading Shakespeare at an early age in her native Russia, where music has long been an integral part of productions. A Russian film version of “Hamlet,” her favorite, has a score by Shostakovich. “It is so aching,” she states. Opera and ballet versions wrapped Shakespeare’s words in scores by Prokofiev, Verdi, Gounod, Berlioz. And of course there was Tchaikovsky’s often heard overture to Romeo and Juliet.

This past summer, however, commitments in Italy prevented her from getting to England. But as she points out, “the music was not born in England. It comes from so many places, and times. We will have some music from the 17th century that was used in his plays. And we will have a new composition by Michael Gandolfi,” chair of NEC’s Composition department. She researched Shakespeare extensively nonetheless, and was fascinated by his marriage to Anne Hathaway at age 18.

Now in their 24th year, Dudochkin’s tributes started out by chance. They have never played to an empty seat. Indeed, when she honored her mentor and friend Aram Khachaturian in 2004, in what would have been his 100th year, the concert sold out within 30 minutes. A second concert had to be added, and it too sold out.

As a faculty member at NEC, which she joined in 1990, “I had the chance to use Jordan Hall,” recounts Dudochkin, who is also a member of the piano faculty at MIT and well-known internationally as a concert pianist. “I thought if I just have a solo piano recital, will it be inspiring for people, with so many great pianists around? I decided that I would like to do more than just piano music.” That year marked the 100th anniversary of Prokofiev’s birth. She assembled a program using musicians she knew and offering works both well-known and unfamiliar. “The hall was full. People were sitting on the stage,” she recalls with a sense of astonishment undiminished after more than two decades. “Why not just continue doing concerts like these, since it was so successful?”

Once the idea caught on, friends began sending her the names of composers having an anniversary of note. Her own list grows from year to year. Mounting the concerts is a big job, from programming, research, and artist selection to “notes and bios and tickets, then hoping nobody gets sick.” And she has to prepare her own performance. Despite all, she is already think about next year. “It will be our 25th year, a quarter of a century,” she marvels. And who is at the top of the list? “Scriabin,” she says quietly. “I love his music so much.”

Stephen Landrigan is coauthor, with Qais Akbar Omar, of Shakespeare in Kabul.

Comments Off on Dudochkin’s Annual Fête Salutes Some Playwright