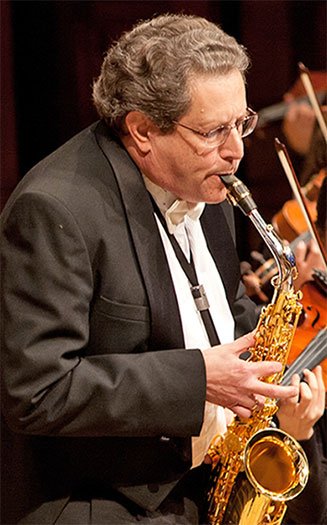 For his NEC faculty at Jordan Hall on Monday, saxophonist Kenneth Radnofsky took the title “NorthEast Corridor” (whose initials just coincidentally coincide with those of New England Conservatory), which makes sense in that the composers represented all have some connection with the upper range of the Washington-Boston axis. More pertinently, though, of the seven works on the program, three were written for Radnofsky, whether spontaneously or on commission through the World-Wide Concurrent Premieres and Commissioning Fund, with which he has been closely involved for many years. The other works are either significant in Radnofsky’s own development as a performer or influenced or illustrate the Radnofsky-related ones.

Radnofsky got started with the premiere of Jeremy Van Buskirk’s A Sigh Felt Across the Earth for alto saxophone and electronics, in which the saxophonist’s live sounds were processed by computer algorithms and fed back as accompaniment. The “motto motif” of the work, as it were, is a sighing pitchless breath with which it begins, that echoes and ramifies, before a more conventionally pitched wailing tune takes over (the opening material recurs at the end to tie it all together). The piece seemed lucid, well constructed in a vaguely ABA form, and quite pretty, without plumbing any great depths. It elicited Radnofsky’s usual high level of craft and communicative artistry.

There followed another sax and electronics piece, but this one harking back to fairly early days of the genre, with Michael Horvit’s 1971 Antiphon. This was from the days when “tape” really meant tape, and sounds were recorded en plein air, manipulated and edited manually with reel-to-reel tape decks, X-Acto knives and splicing tape. Antiphon is in five connected movements—really just sections, as they fly by so fast that it’s hard to keep track except when forewarned by a movement title like “Cantus Contrapunctus” or the Epilogue that ends with an electronic sonority rather like a cow bell. The thematic material is pretty constant, being generated by a single tone row (did we mention, this was written in 1971?) Horvit, who was present (as was Van Buskirk), was Radnofsky’s teacher at the University of Houston, and produced a surprisingly lyrical piece, with emotional pull, which merits repeat hearing. Radnofsky acknowledged from the stage that after playing it when he was 18 or 19, as his first exposure as a performer to electronic music, he hadn’t done so since, yet his performance here was intimate and persuasive. The composer, who was seated across the aisle from us, seemed from his expression gratified and bemused by this invocation of his long-ago self (he later told us that he gave up writing for electronics after a dozen or so pieces).

The first half of the program ended with a work for saxophone solo, the Piccolo Studio, written for Radnofsky in 1999 by the late Donald Martino, who used the corresponding Italian for the more common term etude. As advertised, this was a short piece but packed with Martino’s characteristic dodecaphonic lyricism, along with some tricky passages displaying a wide variety of articulations. As it almost goes without saying, Radnofsky brought it off with flair and grace.

The biggest works on the program followed intermission, beginning with the top-billed local premiere (the official “first premiere” took place the previous night in New York) of Greenwich Village Portraits for saxophone and piano by David Amram. Now, anyone who has had children within the last 30 years or so will doubtless be familiar with the offhand tribute “A peanut butter sandwich made with jam/One for me and one for David Amram,” as delivered by Raffi. We’ve known about Amram’s multifarious career in classical music and jazz (and more—he was a crossover artist before such a term existed) for nearly fifty years, but until last night had never seen him in person, at age 83 more laden with chains and medallions than any of the Seventh Avenue sidewalk vendors who adorn his beloved Greenwich Village. He spoke (very softly) to the audience about the relationship between performing and composing (he thinks they’re inseparable) and the background of the portraits, which combine personal portraiture à la Virgil Thomson with Amram’s own musing on the geography and time they represent. Curiously, he drew a parallel between his autobiographical music and that of Berlioz; curious because Berlioz was one of the few major composers who were not, in fact, proficient on any instrument.

The portraits, entitled “MacDougal Street (for Arthur Miller),” “Bleecker Street (for Odetta),” and “Christopher Street (for Frank McCourt),” are without a doubt poignant and evocative (we were there then, and even remember seeing one of the Miller plays Amram scored when the Lincoln Center Theater was in the Village before the New York State Theater was built uptown). While the first two plainly grow out of jazz and blues sensibilities, they also tightly integrate classical principles of construction and present some complex musical argument. In the Bleecker Street movement, in particular, a gentle and moaning sax line contrasts with a chorale-like piano part (very effectively and subtly played by Radnofsky’s accompanist for the second half, Damien Francoeur-Krzyzek), and contrives to suggest, without apparent actual quotation, familiar tunes at the back of one’s memory: spirituals, blues, Broadway, even Swanee River. The finale was, in our view, the least successful of them, though charming in its own right: a riff on a traditional Irish ballad that opens and closes in jaunty jiggery-pokery, between which the music goes into high “Danny Boy” style sentimentality. Before the concert, Radnofsky assured us that if we didn’t weep during this number we were heartless brutes; well, so be it—while there are a few works (three by our count) that move us to tears, this one isn’t among them. No slight is intended, though, to the performances, which in all the movements were secure, rhapsodic, committed and expert.

Every twenty years or so, Radnofsky owned from the stage, he likes to dust off his clarinet and take it for a spin. And so he did in two pieces on the program, the first of which was Leonard Bernstein’s 1942 sonata, the composer’s first published work and still immensely popular with performers and audiences. Radnofsky purported to hear in it adumbrations of the Bernstein to come, particularly the composer of Candide and West Side Story. The latter may be deduced only from a characteristic repeated rising major second interval in the introduction (later repeated) to the finale, which Bernstein may have consciously or unconsciously reused in “Somewhere.” Except for the fast part of the finale, which definitely has that Bernstein feel to it, the rest of the sonata still sounds to us more like a catalogue of influences—Piston, Hindemith, Stravinsky—than a unique voice. Still, it’s a delightful piece and, though Martin Fröst, Sabine Meyer and Emma Johnson have nothing to fear from Ken Radnofsky, he and Francoeur-Krzyzek brought it off deftly and with spirit.

The oldest work on the program is one of the masterpieces that cast a long shadow over all subsequent jazz-influenced classical composers, Bernstein and Amram surely among them: George Gershwin’s Three Preludes. Originally, of course, for solo piano, they have been widely arranged, most famously for violin and piano by Jascha Heifetz, and for clarinet and piano by several people, James Cohn’s and Ilya Tishkov’s being widely used. Instead of the clarinet versions, Radnofsky made his own for alto saxophone and piano. In this version, with its lower register and darker timbres, it opens up fascinating expressive possibilities that Radnofsky the performer, together with Francoeur-Krzyzek, exploited with gorgeous suppleness, especially in the slow middle number. What is lost, naturally, is some of the brilliance that the treble instruments bring, particularly in the Latin-influenced third prelude. There was, however, no loss of brio in the playing.

Radnofsky concluded on the clarinet with his arrangement of “Goodbye,” a tune written in 1935 by Gordon Jenkins for Benny Goodman, who adopted it as his theme song. Soft, sad, and haunting, it brought the program down to a gentle landing.

Comments Off on Radnofsky in Great Form at Jordan Hall