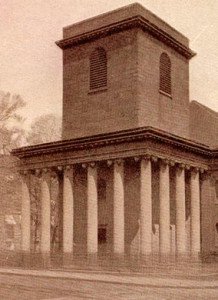 The story of organs in American churches began in 1713, when Thomas Brattle bequeathed his one-manual English instrument to King’s Chapel, then housed in a wooden structure. Peter Harrison’s stone chapel was dedicated in 1750 and has continued to the present as the home of the congregation, and, over the intervening years, to a number of successor organs—none particularly successful in the decidedly non-reverberant space. But it was not until 1964 that another American-organ-first happened at King’s Chapel.

Fifty years ago a significant new tracker organ by C. B. Fisk debuted. That event will be remembered with a concert of music for organ and string quartet on Sunday, February 23rd, at 5 PM. Previewing one selected for the national convention of the American Guild of Organists here in June, the program features Sonata no. 1 by Daniel Pinkham, Quintet in G by Padre Antonio Soler, Capriccio by Naji Hakim, and Robert Sirota’s Apparitions, commissioned by the AGO,  the subject of a discussion below. Performers will be Gabriela Diaz and Gabriel Boyers, violin; Noriko Herndon, viola; Rafael Popper-Keizer, cello; and Heinrich Christensen on the Fisk. 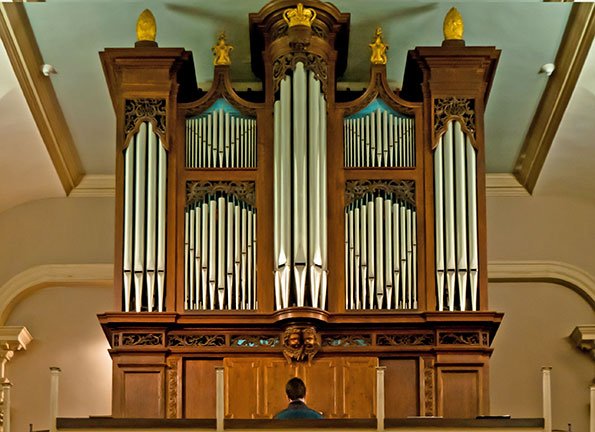 When composer and extract heir Daniel Pinkham became music director of King’s Chapel in 1958, he inherited the 1909 E.M. Skinner organ, an instrument so large that two divisions had been relegated to the attic. In 1959, Pinkham engaged Charles Fisk to make some tonal alterations. However, the deteriorating mechanical condition of the organ led to the decision to replace it. A contract was signed in 1961, and the Skinner organ was removed in 1963, so construction on the new Fisk organ could begin. The organ was at the forefront of the newly revived interest in mechanical action organs as the first 3-manual organ built by an American firm in the 20th century.

The formal dedication took place during the regular 11 AM service on February 2, 1964. There was a dedication concert of music for organ, brass, and percussion that same afternoon at 5, repeated at 8:30 to accommodate the crowds. The concert was recorded and broadcast later on no fewer than seven radio stations. Critical reviews were highly favorable. William Saunders declared in the Christian Science Monitor that the organ was “a milestone in the continuing growth of interest in classical principles of organ voicing and construction.”

Of the commissioned work from Roberrt Sirota, we have the following to convey:

Apparitions, for Organ and String Quartet, commissioned by the American Guild of Organists, will have its second official premiere in Boston this summer as part of the AGO’s 2014 national convention after its first appearance at the 50th anniversary celebrations next week. Of Apparitions Sirota says, “I am really pleased to be be collaborating with Heinrich Christensen, a true champion of new music for organ. Working with him on this project has been, and continues to be, a delight. In addition to the preview concert at 5pm, the piece will also be played during the 11am service that morning, and I have been invited to give the sermon as well – a first for me!

American hymnody has played a significant role in my organ writing for some time. The last organ piece I wrote was for the historic Appleton organ, an 1830 instrument housed in the Metropolitan Museum of Art. It’s a rather ghostly instrument, so I imagined that three early American hymns (Helmsley, Semley, and From Greenland’s Icy Mountains) had been played on the Appleton so many times that the organ was able to play them by itself, and I went from there. The title of that piece is holy ghosts. I was still turning that idea over out in my mind when I learned that the 2014 AGO commission would be performed in King’s Chapel, practically the epicenter of 18th  and 19th-century New England hymnody.

Apparitions emerged as paraphrases on four tunes – not so much variations as jumping-off points for something more flexible and fantastic. I have employed two Southern Harmony tunes:  Jesus Calls Us (Restoration) and Wondrous Love, and two Northern tunes: My Shepherd Will Supply My Need (Resignation) and Come Thou Fount of Every Blessing (Nettleton), and am in awe of the spiritual and emotional range of these great melodies: the stark simplicity of Resignation, the primal power of Restoration, the passionate joy of Nettleon, and particularly the fierce piety of Wondrous Love.”

Robert Sirota met his wife Vicki in college, where he convinced her to switch from psychology major to organ major. She eventually became an Episcopal priest, serving for several years as Chaplain of the AGO. Robert remembers, “I initially became very interested in the organ because I was very interested in Vicki. I started writing music for her, because she would ask me to… So I started getting fluidity and facility, and of course she played everything so beautifully, it was worth it, like an instant commission; you’d write it and the next day you’d hear it.” Sirota has been commissioned by the AGO to write for the National Convention twice before: a choral Mass in 1990 and an organ concerto in 2000.

Over the last four decades as a composer, Robert Sirota has developed a distinctive voice, clearly discernable in all of his work – whether symphonic, choral, stage, or chamber music. The New York Times has described his styles as, “fashioned with the clean, angular melodies, tart harmonies, lively syncopations and punchy accents of American Neo-Classicism,” and writes, “Thick, astringent chromatic harmonies come in tightly bound chords to create nervous sonorities. Yet the textures are always lucid; details come through.”