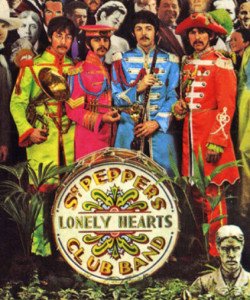 Sunday is the 50th anniversary of the Beatles’ first appearance on the Ed Sullivan Show. By then the American public had relaxed its prudery and allowed full-length shots—as opposed to the camerawork of Elvis which cut off his famous pelvis. WGBH will celebrate the arrival of the fab four on our shores on TV and radio. What an ironic and amusing moment to introduce Anthony Rudel, the new Station Manager of WCRB to BMInt readers. (We will have a more extensive interview with him next month about his plans.) Tony was also an eyewitness to the shooting of John Lennon, and he tells us about that as well as about what WCRB is doing to commemorate the Beatles this Sunday.

BMInt: So, for one weekend WCRB is going to be a classic rock station. What will that do for ratings? That format usually ends up with a five or six share in Boston ratings.

AT: Wouldn’t it be great if we could take some of those people and just have them taste the incredible music we play? Well, that’s sort of where my head is at. For me, this is one of those moments. About ten days ago I thought to myself, okay, if you were 15 when the Beatles appeared on Ed Sullivan, you’re now 65.

Right, which is probably the average age for Symphony goers.

That’s probably right. So, I started thinking about what that means in terms of radio. This is a generation that has grown up listening to rock radio. It’s a generation that still goes back to that music, especially of the Beatles, and kind of holds that as the pinnacle of what we now call classic rock. I started thinking it through and I thought well what could we do on WCRB? Part of what I want to do is say, yes, we play classical music, but we’re not stuck in the eighteenth century or the nineteenth century. We’re a 21st century radio station. I always want to do something that is musically sound, so yes, we could play orchestral versions of Beatles songs….. I know there was an album, some string quartet did an entire album of the Beatles, and frankly it’s just not musically great. It’s not great rock-n-roll, and it’s not great classical music.

It’s inauthentic in both genres.

Exactly. And it doesn’t serve any audience, because the classical audience thinks, “Well, so what?” and the rock-n-roll audience goes “Yuck!” I’m very fortunate that I spent part of my career working on something with Billy Joel. He’s an incredible musician, and his love of classical music is not skin deep. It is part of his soul. Part of his genius, if you ask me….. It’s his knowledge of classical music and what the great composers did that enables him to compose the way he composes. I contacted him and he agreed very graciously to do an interview with me which we then cut up, and James David Jacobs will have it on his show on his Sunday Brunch program between 9 and noon. Billy talks about that night 50 years ago and the impact it had on him. Then he makes some wonderful connections between the way the Beatles moved him and the way Beethoven moves him, and the way Bach moves him. It was not a long interview because I don’t believe in long interviews, I think that that drives audience away. But it’s little sound bytes, and we pair it up with the right music, so on James’ show, which is a wonderful environment for that, it’s called the Boston Sunday Brunch, and the whole concept is: What’s going on today? Sunday is exactly 50 years since the Beatles appeared on Ed Sullivan. So you’ll hear some of these clips with Billy Joel. You’ll hear a little bit of “I want to hold your hand,” you’ll hear “Penny Lane” and the Bach second Brandenburg, because they both use the piccolo trumpet, and there was an influence there. I don’t want to tip my whole hand, but you can imagine, there are three or four really nice Beatles songs, and the classical music, and Billy talking about them. It’s just a way of saying we’re connected. That doesn’t mean we’re going away from our core mission of playing great classical music all the time; those hours are still loaded up with classical music.

I never heard much discussion of classical sources for Beatles music, so that will be interesting. We did all know at the time that the Beatles music was harmonically much more interesting than the rock-n-roll that had come before it. That’s why it appealed to a lot of classical musicians from the get-go.

The Beatles weren’t considered an important band. So they found this producer who had done some classical stuff, and some comedy stuff. They said, “Why don’t you work with this group.” That’s how George Martin became their producer. He was very sensitive to the classical stuff because he knew it. When “Yesterday” was written, he said, let’s put strings with it. Do you realize that in “Eleanor Rigby” there are two string quartets? There’s no guitar, no drum. The classical influence: George Martin said, let’s bring this musical strength to what you’re doing. This is something that affected Billy Joel tremendously. He talks about his own albums and how they’re influenced not only by classics, but by the Beatles. You have this sort of duality of two tracks. The other thing we’re doing is presenting one phenomenal album by German guitarist Göran Söllscher. He recorded for Deutsche Grammophon, and he did a Beatles album, which is truly interesting. We’re going to be sprinkling that through our schedule as well.

Do you have anything to do with producing the events on WGBH radio and TV?

I came late to the party. It was more logical for WGBH. They’ve been working on this for a while. It was literally 10 days ago I woke up and said, we’ve got to be connected to this. Our audience, the audience we need, they grew up with this stuff!

Do you know the German male singing groups, Die Singphoniker? They did a wonderful version with Schubertian accompaniment of “I want to hold your hand.”

There’s also a string quartet, Ebené, who did a version of a couple of Beatles songs on their most recent album. I thought that might be a little off target as the music relates to the radio. There’s a lot of good stuff. It speaks to this notion that it’s just great music. Yes, we are a radio station that plays classical music, and that is what we do. But you can’t ignore other music. When I did the thing on WQXR back in 1980, where I took a whole hour and did nothing but Beatles songs, I would have figured the earth would have shifted.

The Beatles, I think would be okay. If you did it with rap you might not be where you are now.

We’re a music station. Rap is not part of the thing called music.

The press release says that you were present at the shooting of John Lennon.

I was. I lived across the street. I lived on 72nd street, near Central Park West. Ironically I was coming home from a concert at LincolnCenter. I turned the corner just as his limousine turned the corner. Being a New Yorker at the time, I kind of glanced over, and I saw John Lennon get out of the car, which I’d seen a hundred times before. I’d seen him in the little espresso shop that we used to go to, called Cafe La Fortuna, where they played opera all the time. He used to sit there. We never said hello to him, but everyone would wave as you walked past him and he waved back. Anyway, on this particular Monday night I was coming home from a concert. I remember the concert because of the event. Had the shooting not occurred, I would have never remembered the concert. There was a group in New York City called the New York Philomusica. They recorded for Vox for a while and then they disappeared. They were a good group. Anyway, I was walking home and I turned the corner and I see the car. I glanced over, and as soon as I glanced over I saw the guy shoot him.

I had never heard gunshots until that moment, and I’ll tell you something, it’s the most horrifying sound in the world. I saw him fall to the ground. On the thirtieth anniversary of the shooting, which was a little over three years ago, WNYC in New York produced a roundtable discussion of people who were connected to the shooting. So I saw the shooting and the person who saw him next was the emergency room doctor, but he didn’t know it was John Lennon. He and I had never met though we lived a block apart. We met three years ago at this round table discussion about that night.

They didn’t need any witnesses, because the gunman stood right there until the police came. The irony of the whole thing of course was at that moment I realized I was the only member of the New York media to know what had happened. I went up to my apartment and I called WQXR. I wasn’t in charge in those days, I was low down on the totem pole. The announcer on duty said “I’m sorry, you’re gonna have to get someone’s permission to break in.” I said, “Why?” He said, “We’re in the middle of a Boston Symphony Orchestra broadcast.” I couldn’t do anything with this story, and it broke on national TV. Howard Cosell broke it actually, during Monday Night Football.

Exactly. It stops every ten seconds. It was an easy one to do.

Comments Off on Beatlemania at WCRB