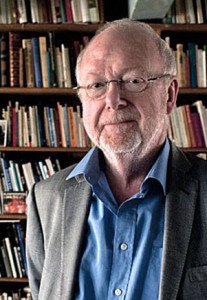 By some coincidence, Boston is currently hosting two of Holland’s most renowned musicians. Most readers will know that Bernard Haitink is conducting the BSO at Symphony Hall this week, but it’s a better kept secret that just around the corner composer Louis Andriessen is in residence at Boston Conservatory as part of his 75th birthday tour [details here].

Their visits will have no creative intersection—for one thing, Andriessen does not write traditional orchestral music. He draws very little from 19th-century music and rarely writes for groups primarily engaged with that repertoire. Instead, his compositions touch on an eclectic range of 20th-century musical styles including jazz, modernism, and minimalism.

By Sunday, 35 of his works will have been performed on BoCo’s festival, offering a detailed musical portrait. I spoke with him during a free hour in his residency and the conversation offered a nuanced look at his creative life, his politics, and at the ebb and flow of the musical movements of which he has been a part.

“During my life I have had my ears and eyes open to things I didn’t know yet,” he explains. His father Hendrik and older brother Jurriaan were also both composers and Andriessen’s upbringing gave him access to a great deal of music. “It’s an amazing advantage to have so much information when you are very young,” he says.

But Andriessen’s childhood also left him with a curiously impersonal perspective on musical creativity. “You have to serve the music, do it as well as you can,” he says. “It never occurred to me you have to use music to express yourself.” Echoing an old saying of his father’s, he adds “people are not important—we are only worms.”

This outlook rejects individuality and ego as important aspects of a composer’s process—and many will find this strange. But it has freed Andriessen to be unusually open to the possibilities of different kinds of music. In the mid 1950s, his brother brought a collection of jazz LPs back from the U.S., including Miles Davis’s Birth of the Cool. The discs made a strong impression on Andriessen, and quickly his own compositions started showing the influence of modern jazz.

But he isn’t just a musical borrower and adapter of preexisting styles, for he was involved with minimalism from its very beginnings. “I’m part of it,” he says. In 1962 he met the American composer Terry Riley in Darmstadt. Riley is best known for In C—generally regarded as the first minimalist piece—which premiered in 1964. So this was two years earlier when the young Andriessen and Riley connected over an important shared interest. “I liked him very much. We were both jazz fans,” Andriessen recalls. “Most of the composition students never listened to jazz, even in the late 50s.”

By the end of the following decade he had heard Steve Reich’s early experimental tape pieces on recordings that crossed the Atlantic. He also became politically active and was involved in a 1969 Amsterdam protest that condemned the Concertgebouw Orchestra as an elitist institution and halted a performance with Haitink on the podium. From that point on he refused to write for the symphony orchestra, but looking back he stresses the musical reasons for this decision over the political ones. “I didn’t like the sound and I didn’t like the repertoire,” he explains.

Still, he was willing to also offer some recollections of the explosive political climate of the time. “The 60s started in America with teach-ins, and that was taken over by the Europeans, first in Holland by Provo – they were outspoken anarchists, but also artistically engaged. And then in 1968 came Paris, and Prague at the same time, so the whole world was totally changing. And that was for me a reason to sit on the couch and think ‘what should I do?’”

The answer came in De Staat, a large scale work inspired by Plato’s Republic for four voices and an eclectic band. “Through all the discussions of music and politics, I thought the level was too low. They thought that when you read Marx, you’re ready—but it’s much more complicated. So I wrote De Staat to show how complex the subject is when we let this old Greek speak.”

Aside from acknowledging its generally radical outlook, Andriessen resists spelling out more precisely the political message of the piece. “It’s one big anger about a lot of things. The meaning is dialectical and conflicting.” In fact, Andriessen is very skeptical of any deep causal connection drawn between music and politics. Referencing Plato, he muses: “change the laws of the music, then you change the laws of the state? Not many examples where it succeeded.”

Instead, he suggests that a social democracy should support music as an inherent good, just as it supports the sick and the elderly. “I hope to live in a country that takes very serious responsibility for groups who need support. Like health, living conditions, hunger—that’s the first thing of course to do. But a part of that whole package and responsibilities is certainly culture.”

Recently Andriessen has been angered by the funding cuts made by the current Dutch government of which threaten the existence of many of the specialist music groups that have arisen in the Netherlands in the past decades. But even as he remains politically outspoken, he has also been willing to make at least one compromise—just last year he accepted a commission from the Concertgebouw. “It was under pressure I said yes,” he explains. “And I said goodbye to the large orchestra—I reworked the ensemble.”

There is no doubt that Andriessen’s work—and De Staat in particular—have shaped the development of music in the late 20th century. Not only has he borrowed from disparate musicians and traditions, but other composers have drawn from him. “Steve Reich doesn’t want me to say it, but I brought him the first recording of De Staat, and that was about a year before he dared to start writing Tehillim,” Andriessen notes, referring to Reich’s first large ensemble piece. But influence and admiration run both ways: “Steve and I, I have the feeling have been very faithful to each other always. We’re the same generation.”

Besides telling of his life, music, and politics, Andriessen offers just a little practical composition advice. It turns out to be a homey recommendation of a typically Dutch type. “Technically speaking, you have to sleep well and be in good health. It should be fun, also, composing.”

Louis Andriessen is in residence at The Boston Conservatory until February 9. On February 8 at 1 p.m. he will appear on a panel discussion with fellow world-renowned composer Gunther Schuller, and that evening at 8 p.m. De Staat will be performed by the Boston Conservatory Wind Ensemble and the New Music Festival Orchestra.

Other events are listed here, and the panel discussion will be streamed live here.

Benjamin Pesetsky is a Cambridge-based composer who’s recently been in residence at the Banff Centre and the Hambidge Center. Before that he attended Bard College where he studied with Joan Tower and George Tsontakis and earned a B.M. in composition and a B.A. in philosophy.

Comments Off on BoCo Residency for Andriessen