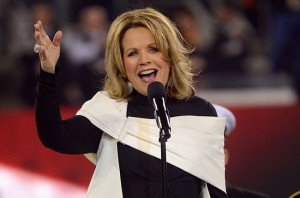 The worlds of opera and football so seldom collide, that after the NFL announced that Renée Fleming would be singing “The Star-Spangled Banner” before the Super Bowl, it’s likely at least some classical music lovers planned to tune in for that alone. The American soprano has sung major roles to acclaim and honors in the great opera houses of the world; this week, before and after the Meadowlands, she sang performances of Dvořák’s Rusalka at the Metropolitan Opera.

Those 100 million viewers worldwide who turn on the television to watch two pro football teams compete for the championship also see advertisements costing $4 million for 30 seconds, not to mention the halftime show.

The Super Bowl is in the center ring of entertainment and commerce. Fleming, who is 54 years old, said that at first she thought the request was a joke. Among opera fans, she is known for her creamy, ethereal tone, for spinning out pearly strands of sound in the stratosphere, and for her in-depth portrayals of heroines, often tragic. Sports fans may not know that this kind of singing is an athletic feat of the highest order, requiring long years of preparation. During college Fleming sang at jazz clubs, and she has recorded crossover pop among her many CDs, winning four Grammys along the way. She knows how to reach an audience. Have a look at her Superbowl appearance here.

In its 47 years, no opera singer has performed the national anthem at the Super Bowl. Of course many pop singers have, ranging from wonderful to awful, among them Whitney Houston, Alicia Keyes, and Christina Aguilera. Met baritone Robert Merrill, an avid baseball fan, sang it at Yankee Stadium, but never for football. Likewise Roseanne Barr, not a singer, did so infamously at a baseball game, causing a furor with her vulgarity. Rather than critique various performances—you can do that yourself on YouTube, and here is a sampler of the weakest, whereas here is link to Whitney Houston’s excellent pop version—let me set my criteria.

Foremost is singing the anthem in tune, to the correct notes and words (this is surprisingly rare). Musical phrasing which can enhance the meaning of the words is very desirable. Interpolations and embellishments to the melody may be fine if tasteful, that is, in keeping with the rest: ornamentation has a long history in both popular and classical music. I want the rendition to show respect and have dignity, to reflect on the occasion, not the performer.

Let’s look at our national anthem itself. Lawyer and writer Francis Scott Key penned the poem during the War of 1812 while watching the British Navy bombard American soldiers defending Fort McHenry in the Chesapeake. Only the first verse is sung. It was set to an English song already popular in the United States, composed by one John Stafford Smith, and in 1931 was designated the United States’ national anthem.

The melody is often maligned for its wide range. That’s just what I like about it. You stand tall and sing it with energy, at an athletic event especially. Its forthright triadic statement is propelled with dotted quarters. Puccini quoted its opening notes in Lt. Pinkerton’s first big aria in Madama Butterly to establish the tenor’s stalwart (later ugly) American character.

The tune ranges over an octave plus a fifth. Comparing it with other patriotic songs, “America the Beautiful” (which Queen Latifah sang very well earlier in the pregame show) has an octave plus a third; “God Bless America” an octave plus one; “My Country, ’Tis of Thee” (aka “America”; its tune is the English national anthem as well) a seventh; “Yankee Doodle” an octave plus one. “The Star-Spangled Banner” stands out because the melody leaps about and the top notes are exposed. The musical phrase to “O’er the land of the free” rises to the high fifth, all the better to express its meaning. (For the minority view, by another of Boston’s own, see here.)

On Sunday, with much anticipation, Renée Fleming appeared on the field at the Meadowlands. She looked elegant in a simple black gown and white stole (who expected the weather to be so warm?). Although she never uses a microphone on the opera stage, here she employed amplification to be heard in that vast outdoor space as she actually sang instead of lip-synching. Behind her were the New Jersey Symphony Orchestra and a chorus from various branches of the armed forces. Camera coverage and mixing on Fox made it hard for me to see and hear everything, as cameras panned the players about to go into their own combat, as well as the color guard and an enormous American flag. These flourishes are part of Super Bowl pageantry. Renée Fleming alone singing live into the mike would have been enough for me.

She started with her slightly croony pop voice, lyrical and legato, and chesty lower register (in key of A, not the usual B-flat). With rockets glaring she became more fervent in tone and feeling, then hushed with proof that the flag was still there. The arrangement had echo effects in melody and rhythm with the other musicians, but her rendition, given Super Bowl tradition, was remarkably straight, with a few simple hand gestures. She seemed to grow more relaxed, she seemed to feel it. My one quibble is that she broke the phrase “O say does that star-spangled [breath] banner yet wave?” No doubt she was preparing for her rise in “O’er the land of the free.” Here she rose to the fifth and then leapt up to the octave tonic (A) in pure and gleaming tone softening as she spun it out. She smiled radiantly to the audience. At the very end, she added an extra “the brave” to the fifth and high A.

In the third quarter, Seahawks wide receiver Jermaine Kearse made a dancing, spinning run, eluding four or five tackles  [you can decide after seeing the replay here], to score a touchdown. It was pure athleticism, pure gracefulness. Football and art do not have to be separate.

Elizabeth Gawthrop Riely, who has an MM in voice from New England Conservatory, is co-president of The Boston Cecilia chorus.