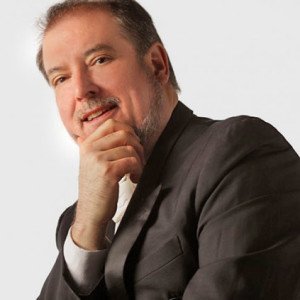 A large musician in all senses of the word, a keyboard, and a program mainly of big 19th-century works—Beethoven op. 109, Schubert Wanderer Fantasy, Chopin Sonata in B-minor, plus Griffes op. 5 (1911-’12)—make for what is likely to be a most impressive pre-Superbowl treat this coming Sunday afternoon in Rockport. BMInt recently spoke about pianist Garrick Ohlsson with Rockport Music Artistic Director David Deveau, himself an important pianist.

BMInt: The opening solo concert at Shalin Liu, summer 2010, was also my first live encounter with that giant of pianists, Garrick Ohlsson. The hall was full, and because of a computer mixup (my seat had been sold twice), I was asked to surrender my reserved place for a chair on stage only a couple of feet from the keyboard. That bear of a musician turned to us people onstage and, with a surprising wink and a nod, got under way. His mastery was undeniable and the attention the audience gave him was absolute.

DD: Yes, Garrick is a friendly bear of a great artist, and one who enjoys a great ease and rapport with his audience. I think he really liked having the audience surrounding him on stage that evening. I remember as a kid attending recitals by Rubinstein and Horowitz that always had a crowded stage full of overflow audience members. In the large halls, we don’t often see this today; too bad.

What is it about his playing that is so commanding?

First of all, of any of today’s great pianists, Garrick has perhaps the most immense repertoire, reaching across all periods. His technical reserves are enviably limitless, and the overall architecture of whatever he plays is always clear. For instance, one often hears the Rachmaninoff Third Concerto as a series of loosely related virtuoso events that can seem like a figure-skating program only about the next double and triple Axel. Every time I’ve heard Garrick in this work, I’ve been reminded again of how the whole piece should unfold organically, not only with the climaxes made plain in each movement, but with the coda of the last movement being the inevitable arrival point of the entire concerto. It takes a lot more than just fast fingers to achieve this.

Why did you choose him for the inaugural solo concert at the Shalin Liu Performance Center?

To be honest, I asked him because he’d played many times at our former venue, a cramped space and tiny stage for such a big guy, and I wanted to show off our new hall to him, and show our appreciation.

Did you particularly ask for the items on his program?

No. As much as possible, I try to allow performers as much programmatic freedom as possible. Obviously, it’s sometimes difficult to do that, as we have so many piano recitals, string quartets and piano trios that there is inevitable repetition of repertoire. But I try to rotate the most frequently played works on a 3- or 4-year cycle. With unfamiliar or new works, more frequent repetitions are actually desirable.

What is it the special quality Ohlsson brings to his programs?

He is perhaps best-known for his traversal of the piano music of Chopin, and he won the Warsaw Competition gold medal in 1970, which started his career. But I find that he is a jack of all styles, and master of all styles too. In this Sunday’s program (which he repeats at Carnegie Hall next week), it’s essentially an all-Romantic program, yet spans 100 years. Beethoven op. 109, the Schubert Wanderer Fantasy, Griffes, and the Chopin Sonata in B-minor. Yet just last week saw him at the BSO with the incredibly thorny Lutoslawski Concerto. Of today’s greatest pianists, perhaps only Andras Schiff has such breadth of repertoire.

And here’s a funny anecdote. Sometime in the mid-’90s, I played in a “Piano Spectacular” concert in Minneapolis at Orchestra Hall, part of the Minnesota Orchestra’s Sommerfest. It featured works for one, two and four pianos, and my fellow artists were Angela Hewitt, Chris O’Riley, and Eduardus Halim. The final shtick on this concert was an arrangement of the 1812 Overture for four pianos. Lots of noise. But when the cannons were supposed to go off, Garrick walked onstage in a cameo. He’d just arrived to play a concerto that weekend and gladly participated as the cannon. He sat down at a synthesizer and at the moment of the explosion he just hit a pedal and voila: cannonfire. Very funny and probably the easiest assignment he’s ever had.

Are there seats left?

Nope. Sold out. But I suggest, as always, that people who’d like to attend call the box office on Sunday to see if any tickets have been turned back; 978-546-7391.

Comments Off on Bear Sighting Sunday in Rockport