A cohort of 120 young players and assorted hangers-on boarded buses at Back Bay Station last Sunday for a journey to Carnegie Hall with the object of showing New York City a thing or two about youth orchestras, specifically Boston Philharmonic’s Youth Orchestra, which conductor Benjamin Zander has built in little more than a year into an institution which the New York Times has noticed in a laudatory review here, concluding, “Whoops, whistles and flash bulbs at the end attested to an abundance of family and friends in the audience, but the concert was one that any music lover would savor.” BMInt spoke with Zander about the tour—what it meant for him, the critics and the players.

BMInt: Had I not already heard the BYPO, I would have considered it an extreme act of hubris to schedule a tour appearance at Carnegie Hall and invite the New York critics, especially since you probably had to book the auditorium long before the group reached its second anniversary. What gave you the confidence to do that? 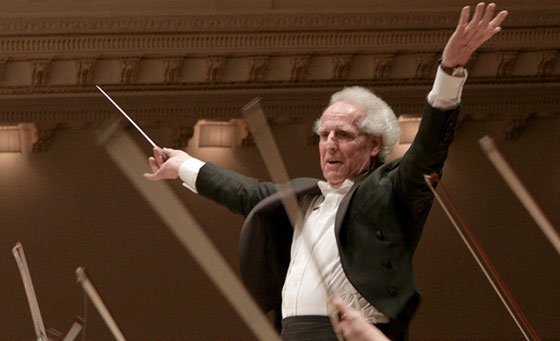 Benjamin Zander: We had actually announced that the orchestra would play in Carnegie the first season!  (We weren’t able, however, to find a date due to the Carnegie Hall renovations.) We were confident from the beginning that this would be an extraordinary youth orchestra, one of the world’s finest. So many factors indicated that the birth of the BPYO was the right idea at the right time. It really wasn’t a matter of hubris but of confidence in the young musicians that we knew would be drawn to play in the orchestra and the desire to give them the very best and most inspiring experience that we could imagine. Performing in great and hallowed musical venues is an important part of that.

What was the tour meant to prove and how did it succeed?

First and foremost the trip to New York was meant to be a life lesson to the players: that by thinking big, by letting go of fear and apprehension, by taking risks, and by being “magnificent” (their last assignment before the trip), they can do remarkable and unexpected things. Then we wanted to celebrate these amazing young people, all of them powerful future leaders, by sharing with listeners the excitement that they feel about music and about life. We certainly succeeded on both these fronts. The players were fully aware of the risk that we were all taking by facing the New York audience and critics, so, having succeeded, they came away feeling a deep sense of empowerment in their lives. Then the applause and excitement for the concert further strengthened their sense of potential and their understanding of music’s power to bond human beings.

Does a New York Times review legitimize what you have accomplished and help you make the BPYO stable and secure?


The New York Times review is certainly a further and much appreciated acknowledgement of the accomplishment of these young people. It confirms the importance of the work of the BPYO to the players, the audience and, indeed, to the future of musical performance. We want to make a deep positive impact on the recognition of and appreciation of great music and many are influenced to take the BPYO seriously with the endorsement of the Times. For this we’re very grateful.

What do the players think?

We have two very exciting programs later this season.  On March 7th we will be performing Mahler’s 5th and the Barber violin Concerto in Symphony Hall and on March 9th (my 75th and Barber’s 103rd birthday) in Worcester’s Mechanic’s Hall. Then on May 15th we will be doing a very ambitious program with Ravel’s Rhapsody Espagnole, the Ginastera Harp Concerto and Strauss’s Don Quixote). Beyond that, we are right in the middle planning next season, so we can’t give details at this point, but I can assure your readers that it will be at least as great as the first two remarkable years. Stay tuned!