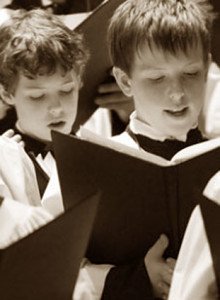 Cambridge, MA has been channeling Cambridge, UK, having been host not only to a notable university or two, but also, for fifty years, to a very rare institution in this country: a boys’ choir school. Located on the eastern edge of Harvard Square, within the namesake church complex, The Saint Paul’s Choir School (formerly the Boston Archdiocesan Choir School), was founded during the Second Vatican Council to implement musical reforms promulgated by the Holy See on the eve of Vatican II. To this day, its choral liturgies bear a distinct stamp of this initial guidance—a reminder of what post-Vatican II music might have been like if chant and art music had not given way to folk rock. Now, the Saint Paul’s Choir School is celebrating its semi-centennial with an elaborate season, which includes two concerts this weekend listed here.

The school’s 50th Anniversary Season showcases both the choir boys and a prestigious group of musical organizations drawn to St. Paul’s special acoustic. As music director John Robinson explained, the resonance and aural experience of performing in the church has a well-known reputation within certain Boston music circles, and early music groups are often drawn to it by word of mouth. This is an acoustic in which chant shines without becoming echoic, polyphony of a certain floridness has space to breath and resonate, and treble voices such as those of boy sopranos and altos take on a splendid but not overbearing shine. Although this is too live a space for many of the great Romantic choral works to truly shine, music from the cathedral traditions is very much at home here.

The resultant concert season comes from a mix of interested visitors and deliberate programming and hosting choices. Robinson noted that exposing the choir boys to peer choirs and the sort of musical ensembles that they might aspire to is an important part of the boys’ musical and professional formation. Some of this was seen earlier in the season, when a Danish choir visited and Ensemble Plus Ultra performed, but with the arrival of the holidays a new tier of organizations is on display. Last weekend’s season included a sold-out concert by the Vienna Boys’ Choir, the Boston Cantata Singers performing Monteverdi’s Vespers for the Blessed Virgin on Saturday, and the St. Paul’s Choir School’s first iteration of its annual Christmas concert.

Upcoming performances continue this rich palette of vocal music. These include the school’s traditional family concert of diverse musical fare (12/13 at 7:00), a visit by the Tallis Scholars (12/14), a Christmas Celebration Works by Warlock, Rutter, Mathias, Poston (12/15 at  3:00), Benjamin Britten’s Ceremony of Carols (12/22), and a free Lessons and Carols service on Christmas Eve. Next spring’s visitors continue the tour de force of early music groups, with concerts by Sequentia (2/1/14), Stile Antico (3/7/14) and the Green Mountain Project (6/22/2014) in addition to the choir school’s own seasonal offerings and organ recitals.

Basil Considine studied music and drama at Boston University and the University of San Diego. A composer-librettist, scholar, and playwright, he was the Artistic Director of the Reduced Spice Opera Company of Brookline from 2006-2012.

Comments Off on 50 Years a Boy Choir