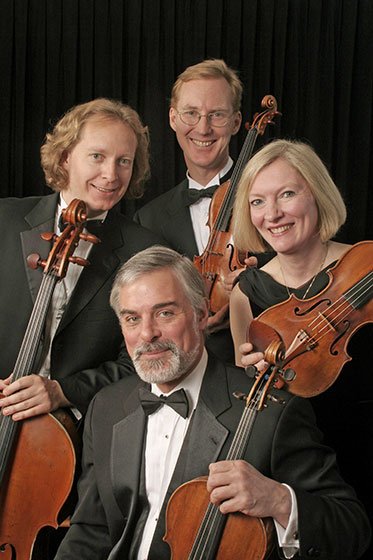 The American String Quartet has been in existence for 37 years now, and has performed numerous times at Maverick Concerts. I cannot recall ever having heard this ensemble play better than it did at the season finale in Woodstock on Sept. 8.

ASQ violist Daniel Avshalomov introduced the opening work on the program by recounting an incident in which the members of the Budapest String Quartet were asked to name the one composer they most liked to perform, writing down their selections instead of discussing them. All four chose Haydn. It doesn’t get any better than Haydn’s last completed quartet, the Quartet in F, Op. 77, No. 2, wonderfully rich music full of Haydn’s typical ingenuity and love. I was sorry the ASQ passed up the first movement repeat (something it also did in Beethoven), but otherwise this was a completely satisfying performance, the warm, rich sound of the group lovely to hear but never at the cost of clarity, balance, or articulation. All the quirks and humor of this piece came across.

Shostakovich’s Quartet No. 3, in F, Op. 73, is not one of his most frequently performed quartets, but it ought to be. (I think we need to hear more Shostakovich quartets in general.) This work, composed just after World War II, is full of passionate drama, a real challenge to performers. The ASQ attacked the music with uninhibited power, which they maintained throughout its half-hour length. The first movement had especially wide dynamics, and the third was wildly violent, as appropriate. Shostakovich’s more poignant moments received equal justice. This was a particularly impressive Shostakovich performance.

Details of Beethoven’s Quartet No. 9, in C, Op. 59, No. 3, can disappear in too vigorous or rapidly paced a performance. The ASQ is preparing for a series of Beethoven cycle performances over the next two years, and this preview indicated that it will be very much worth hearing. The slow introduction to the first movement was mesmerizing, the remainder livened by excellent articulation. I do regret the omission of the exposition repeat, though. Sforzandi in the slow movement were excellent, strong enough to give us the zap Beethoven wanted without sounding exaggerated. Avshalomov mentioned before the performance some controversy about Beethoven’s metronome markings, but the ASQ took his extremely fast indication for the finale seriously. Since the tempo did not lead to any lack of clarity or excitement, the decision to play so fast was triumphantly justified. I remember a recording from the 1950s by the New Music String Quartet which brought this off successfully, but nobody I’ve heard since then pulled it off as well as the ASQ. Bravo!

Comments Off on Splendid Maverick Finale