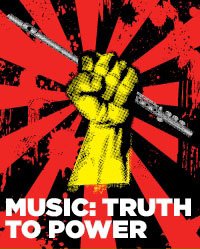 Sometimes the bravest thing you can do is make music. (J. P. Scott)

Building on the template of its “Mahler Unleashed” festival two years ago, New England Conservatory will present a year-long, school-wide, multi-genre festival called “Music: Truth to Power.” According to spokesman Ellen Pfeifer, “It is predicated on the understanding that throughout history, music has played an important role in societies undergoing change. It has served as a catalyst, soundtrack, battle cry, victory cheer, requiem, and meditation. It can be angry, defiant, jubilant, anguished, contemplative and hopeful.”

“NEC’s festival will explore the many facets of this theme in more than 30 concerts from potent orchestral responses to tyranny and oppression, to a jazz master’s Pulitzer-nominated celebration of the struggle for freedom; from the raised voices of children caught and caged in the camps of Nazi Germany, to Ghanaian rhythms and choral exhortations for liberation and African progress; from a modern master’s sublime orchestral meditation on a prayer scratched on a prison wall, to the songs of worker solidarity and the great American dream. The entire NEC community will come together to weave this unique festival from a single thread, asking the question, ‘How have people in all eras and from all cultures turned to music to express the upheavals in their worlds?’ ”

The Conservatory will also pay tribute to Benjamin Britten during this year of his centennial, celebrating in 15 concerts the composer’s extraordinary range of work. The concerts complement the performances of the Britten War Requiem that the Boston Symphony presents this fall and are included in the BSO’s Insight Series. Among the highlights will be string quartets, symphony and chamber orchestra programs, song recitals, and choral works.

BMInt: We have some questions for NEC’s president, Tony Woodcock. How did this theme get developed?

Tony Woodcock: We began to think about it on the heels of the very successful, “Mahler Unleashed” festival [first review here] two years ago. We did about 19 events, and the essence of it, which we’re repeating this time around was that it would be collaborative across all departments again. It wasn’t a question of having only orchestral projects or only having opera projects, but that the festival would include jazz, contemporary improvisation, opera, or elements of the oral program. And as a result we started to get a lot of exciting cross-fertilization from the whole school. The faculty loved it and the kids were knocked out by it. And then there was a second element, which again, piqued the imagination of the students very much: “Mahler In Chinatown” [reviewed here] was extremely experimental and modern. They did everything from a brass arrangement of the first movement of Mahler’s Fifth through to an adaption of the adagietto for guitar and electronics.

And there was a hip hop version of Kindertotenlieder?

Why not? So we’re providing them with exactly the same advantages this time. They get the chance to plan their own concerts, we have interdepartmental collaboration, which is really great for the school, and the theme we came up with was very much a brainstorm with the major members of the faculty. “We had a great experience with the Mahler Festival- what can we do to repeat that for the next semi-annual festival based on getting the whole school involved?

We are presenting a multiplicity of concerts around the theme of revolution. Some of the revolution is absolutely there and apparent, and some of it requires discussion. Here are two examples: The Borromeo Quartet will be doing all six Bartok quartets- that’s pretty notable. But we’re also doing Mozart’s La clemenza di Tito, which is as revolutionary as Marriage of Figaro is revolutionary in that both were about questioning the social order and changing it- to get the ruler to do business and have good relations with his subjects. That led Austria in a very interesting direction, and it led Mozart in a very interesting direction. [Click here for the complete list of events.]

The first work that comes to my mind on the theme of “Music: Truth to Power,” would be Fidelio.

The problem with that work is that it would require one of the most unique tenors in the world. A school of music is not going to going to have a candidate for the role of Florestan. We have no Jon Vickers coming up as far as I am aware. We couldn’t schedule Othello either for the same reason. And we don’t want to bring in professionals in leading roles, because that’s bad for our teaching model and bad for morale. It does happen occasionally though that we bring in an outsider. Our last Magic Flute had a mature Sarastro.

Are you programming other inevitable examples of the perils of speaking to power?

Our production of Victor Ullmann’s Der Kaiser von Atlantis is a powerful example of a composer and performers at a concentration camp speaking to the Nazis.

That’s an incredible piece. It’s not at all depressing or tragic—it’s superficially farcical—it’s essentially thumbing noses at authority. There’s absolutely no gnashing of teeth or weeping. At the end, the characters beg death to come back from his vacation to relieve humanity’s suffering.

Does the theme of “Music: Truth to Power” invite faculty to sing of their rare disagreements with upper management?

Only if they have librettos by da Ponte!